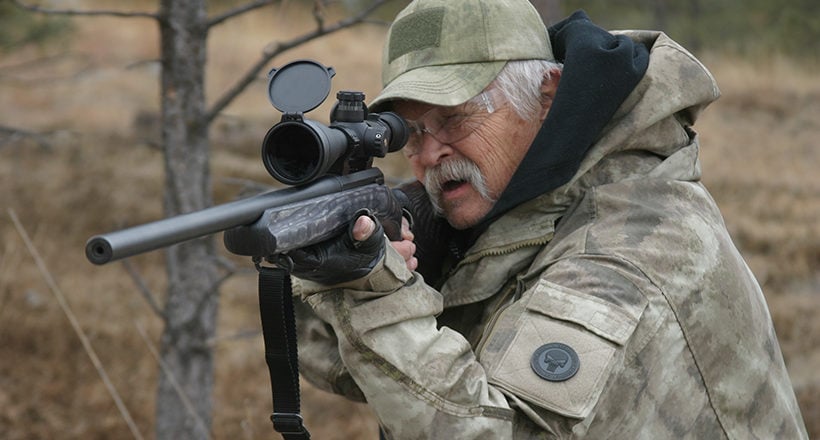 It was deer season in Montana on the Rocky Boy Indian Reservation.

My partner and I had been working with a Blackfoot Indian guide along some nasty outcroppings that were known to hold mule and whitetail deer alike. Using an off-road 4X4 rig, we had just rounded a bend in a two-track trail when our guide spotted several deer above and to our right.

In seconds, we were out of the truck, quickly moving and assuming the prone position against some rocks. We then adjusted our rifles for what was considered in the day as a 250-yard stretch shot at the least.

Now, my buddy and I dropped magazines into our brand-new Winchester Model 100's that were chambered in the also brand new 308 Winchester cartridges, the best at the time. It was game on as the Blackfoot guide hissed in a very low voice, “Take the two bucks to the far right.”

At that command, my partner and I each turned loose a round of Winchester 150 grain Silver Tip ammo, sending the pair of wide beamed mule deer toward the local meat packing plant’s front door.

As it turns out some four decades later, that hunt was the very beginning of a long love affair with the 308 Winchester big game rifle and its pair round.

When selecting the 308 Winchester due to, for the most part, the vast history behind the cartridge and rifle, the very first thing the buyer needs to consider is separating his or her wants from actual needs.

The 308 rifle, because of its lifeline prior to the Vietnam war (1952), has been offered in just about every action type and brand to ever hit the American rifle market.

Chassis sniper/target rifles like this often chamber the 308 Winchester cartridge because it is both effective on game and military targets. The 308 Winchester has a range of 800 or more yards, depending on the exact weather conditions and altitude encountered during shooting.

As a point of fact, you can spend anywhere from $5000.00 and change for a 308 Winchester rifle. Or keep your head on straight and stay well within a $500.00 bill for a basic working field rifle. The bottom line is that you don't need to spend the next month’s house mortgage payment on a new 308 caliber rifle. Ithaca Sniper Rifle and NightForce ''Beast” can add up to several grand in a hurry. What I will try and do here is to separate each major type of rifle by action type and price range, then allow you, to make some judgment calls as to what will meet your individual needs. An example of a very serviceable .308 Winchester rifle is the new Savage SA200 AXIS II XP.

This is a package rifle, meaning that the scope sight system and complete rifle come in the box, ready to use. Savage offers a good deal of bang for the buck. Just zero and go hunting.

Triggers on these rifles are Accu units by design and are both safe and allow dropping of trigger pressure to a very manageable level for accurate shooting. Using modern materials as manufacturing techniques, the end results are rifles in this price range that are both nice to handle and accurate as well.

Over time, here at Ballistics Research & Development, I have tested better than a dozen of this type of basic hard-working Savage rifle and have never found one to give me any problems. Savage is a line of rifles that, regardless of the model being the high-end heavy target, or basic working rifle, will all shoot accurately. This is largely due to the Savage 110 action design used on all Savage rifles.

At the time of writing, the Savage Arms AXIS II XP  is priced $449.99 but it varies, so check the latest price at Cabelas. The O.F. Mossberg 308 Scout /Patrol rifle is one of my basic working rifles and sees a whole lot of time in my pickup truck gun rack. Yes, we still have those in the American wild west today.

With its short barrel and box magazine, it is fast to get up and running, and is nice to haul around with a night shooting system on when or if required. Accuracy with this rifle is one m.o.a (minute of angle) at 100 yards.

Mossberg has come up in quality a great deal over the past decade, and today it offers solid rifles and very fair price tags to match the product.

At the time of writing, the Mossberg 308 Scout Rifle  is priced $811.99 but it varies, so check the latest price at Brownells. Winchester currently builds the lower price point XPR in a 308 Winchester chambering. I own this rifle and use it for general purpose shooting and heavy varmint action when the Dakota winds blow. and that's almost every day around here.

The XPR I have makes use of a Mossy Oak field camo covering, but stripped, it is dressed in a black poly stock, detachable magazine, sling swivels studs, and recoil pad. The heavy bolt is forward lugged and is very strong in terms of its design. I have taken deer, and coyote, and found the rifle to be accurate with a spotter-assisted whitetail kill out to 552 yards this past fall.

At the time of writing, the Winchester XPR is priced $556.99 but it varies, so check the latest price at Brownells. Savage offers a complete bolt action sniper rifle with a threaded muzzle for a suppressor, fluted barrel for cool running with multiple rounds, and a tough dent-resistant polymer stock.

I would like to say I still own this field tool, but a retired major city police sniper that came to shoot with me last summer bought it straight away off my shooting bench. When he observed the ½ moa groups shooting 308 Match 168 grain Sierra MK's, he opened his wallet quickly.

Savage is a lifesaver to police departments that have tight budgets but must face the nasty job of taking down very bad people today. At times, this requires work at a distance, and here comes the sweet Model 10 in the budget-priced high accuracy department.

As a side note, she is not at all bad on deer, either.

At the time of writing, the Savage Arms 10 FCP-SR is priced $649.99 but it varies, so check the latest price at Cabelas. I ran into the Smith & Wesson Model 10 M&P-T during a long-range shoot in Utah sponsored by the N.R.A, shooting programs, Smith & Wesson, and Hornady Ammunition.

The M&P10 is an L series (Long Action) AR style rifle that is chambered most of the time in 308 Winchester. The rifle follows the basic pattern we associate with the Military 110 combat 308/7.62X51 mm rifle. Shooting 168 grain A-Max bullets, the rifles, by way of Huskemaw special long-range optics and at an altitude of over 5000 feet ASL, shot to game accuracy at 1000 yards with ease. S&W Model 10's lined up for a morning 1000-yard school at “Best of the West” Utah/ Wyoming Mountain top ranges. Short Note: Sea level shooting is accurate to 800 yards via the 308 Winchester due to thicker air density

Browning builds the X-Bolt rifle chambered in 308 Winchester. This rifle is offered in both sport configurations and heavy target /varmint models as well. Priced at the mid-price point at about $900.00 depending on options, this rifle is built to last a lifetime, and the shooter can expect nothing but stellar results down range. In this better grade rifle, the buyer is getting Browning quality at a fair price.

At the time of writing, the X-Bolt Eclipse Varmint is priced $879.99 but it varies, so check the latest price at Brownells. Ruger Hawkeye is an offshoot of the old Ruger M77 series turn-bolt rifles. This rifle is currently offered in both a modified varmint version (pictured) and in a heavy barreled flat forend target stocked model as well.

The second Ruger rifle featured is, at this time, in very short supply due to demand, but manufacturing will catch up with demand at some point. This rifle, regardless of which stock and barrel system employed, is a winner to say the least.

At the time of writing, the Ruger Hawkeye Predator is priced $950.99 but it varies, so check the latest price at Brownells.

Rifle far left Model 70 Featherweight Winchester. Second left Browning X-Bolt stocked as a heavy long-range target rifle. Third is a Mossberg Patrol/ Scout Rifle, and the last rifle right side is the Savage Police sniper rifle. All of these are great rifles, but the buyer needs to know the firearm’s purpose and a working price range before shopping for a best 308 rifle. Howa chassis rifle in 308 Winchester. Long Range 1000-yard setup for target or long-range varmints. Here the rifle is being used on a Dakota prairie dog town.

Howa, the rifle builder out of Japan, builds no less the 130 different variations of bolt action rifles that make use of a wide variety of stocks, barrels, and actions. Howa rifles are the heart of the Weatherby Vanguard rifles, and to be sure, these are a class act when it comes to the buyer getting quality. In a 308 Winchester or one of many other cartridges. At the time of writing, the Howa Chassis rifle is priced $999.99 but it varies, so check the latest price at Brownells. This rifle in 308 Winchester is about as classic a turn-bolt as you will ever find in a high-grade hunting rifle. The rifle, depending on options, can run into the thousands, but you get exactly what you pay for. I use this Montana rifle system with specialized 338 Lapua ammunition out to a full mile during the midsummer months against steel targets.

For deer, both here in South Dakota and in Texas, I depended on the sporter weight Model 1999 pictured. What the rifle is amounts to a remake of the classic Winchester Model 70 pre- 1964 design, and as such carries with it ultimate accuracy sub ½ m.o.a, and complete dependability. Shooting groups at the Champion Ranch in Texas last year, the rifle shot one rough hole using Norma Tip Strike ammunition. Not a group, but just a single hole in the paper at 100 yards. By season-end hunting whitetail, the rifle had fired three rounds for three deer. Range ran from 230 yards to 455 yards. This rifle is just that good. ($2000.00+ Depending on options installed.)

When taking the 308 Winchester file and paired cartridge, the buyer needs to understand that if every one of these rifle offerings were to be reviewed, it would take a 700-page book at least.

With its long lifeline as a part of American gun building history, the 308 is without question the king of the range. Until very recently, the 308 Winchester was the second most purchased rifle in America.

Currently, some other cartridges have started to compete with the old masterpiece in ballistics, but I believe time will tell the tale, and she will return to take top honors once again.