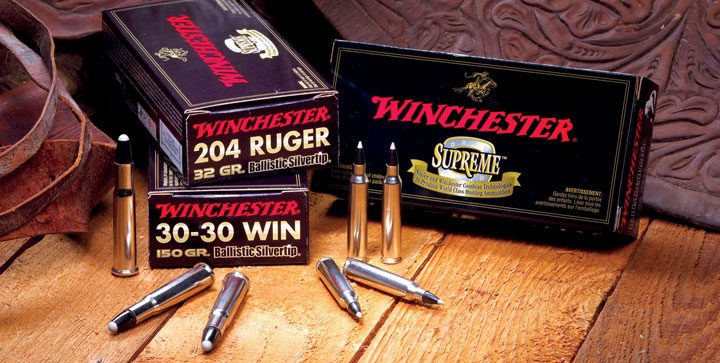 When the folks at Hunting Mark asked me to take a look at some of the best loads offered for the 6.5mm Creedmoor cartridge, my first thought was to the point, I don't believe there are any bad ones in current conduction.

You see, in every case as I select a new cartridge brand, bullet grain weight, or velocity level for testing, the end results have been positive to say the least.

In effect, the 6.5 Creedmoor is a perfect balance of ballistics design when it comes to sending a bullet to long distances and, as such, gains some positive terminal ballistic impact results when that bullet reaches its target. 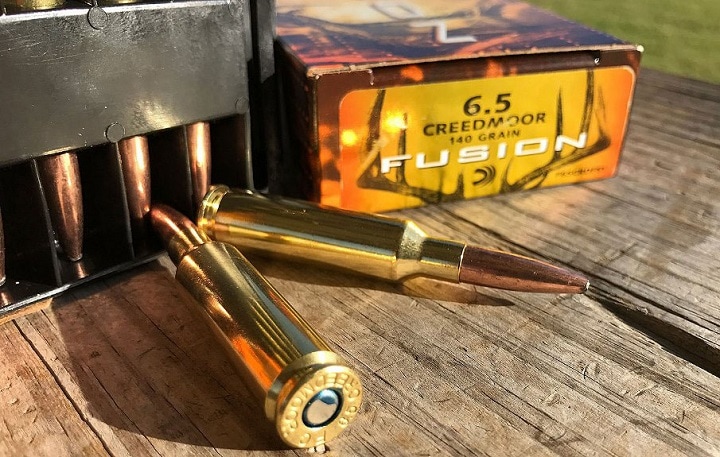 One of the very first cartridges I brought onto the range for testing for a general review about the Creedmoor craze in American was the Federal Fusion in the 140 grain bullet.

Here we have an example of a basic soft nose deer bullet that lacks any fancy title, or even much of any grand entry into the world of high performance ballistics. However, that stated, the Fusion is a drop dead big game stopper when the targets are medium to large mule or whitetail deer.

The fusion was taken afield in the 300 Win Mag first, and the 308 Win second. After seeing the net effects of the bullet on deer size targets over a two-season period, and as the 6.5 Creedmoor came into being, it also took up a place in the test phase of a new cartridge offering based on a very basic game bullet. 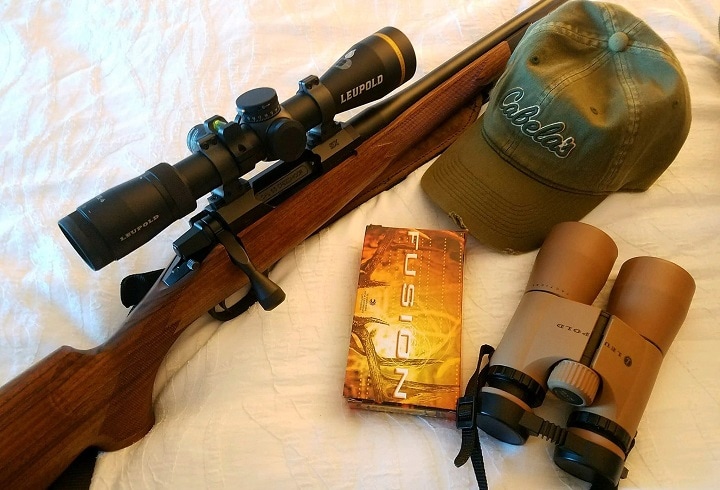 The results of that testing indicated a dead on the nose game getter that was selling at a very reasonable price. If you're hunting deer at normal ranges (inside 300 yards), this cartridge by Federal Cartridge will do the deed and save the family budget as well.

In a good rifle, accuracy is MOA to sub-MOA, depending on the rate of bore twist, barrel length, manufacturing techniques applied to building the barrel, and degree of accuracy blue printing work.

The price of Federal Cartridge Fusion varies, so check the latest price at Cabela's. 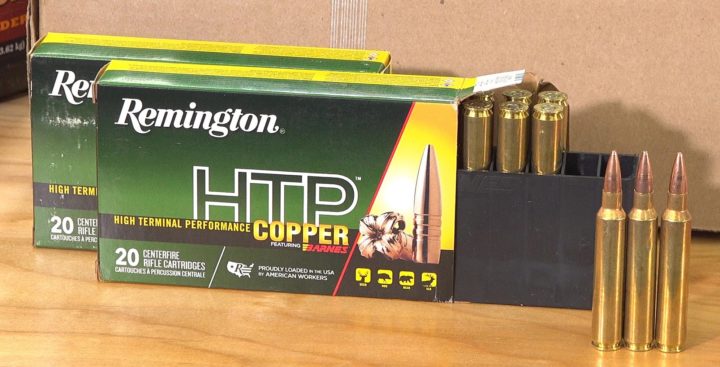 Remington offers a new generation of non-toxic bullets loaded in their cartridges and, in this case, the bullet is designed and manufactured by Barnes. This all-copper XPB bullet is known among some of us who shoot it as the “X” bullet, and I can tell you that it is devastating on game the size of large deer or elk.

With proper bullet placement, I would shoot this Creedmoor ammo on anything that walks in north America based on what I have seen in real time afield.

This bullet make use of four cutting petals that deploy upon impact. I have noted when hunting deer and buffalo that this ammo open fast, but retain their weight and therefore drive a high percentage of basic mass through the intended target.

At 400 yards, I have recovered these bullets from the backside of a 190-pound buck, and also located them at 200 yards on a meat doe as well. The Barnes “X” is flexible and a great option when turning to Remington rifle cartridges.

The TSX Boat Tail retains high BC (ballistic coefficient) and, as such, will carry well to longer ranges. This is one of my favorite long-range bullets for the 6.5 Creedmoor.

The cartridge can be obtained using grain weights in this bullet design from 120 grain though 139 grains. For the most part the 6.5 is well known as a two primary grain weight cartridge, and that being the 120 grain, or the 140 grain.

Both are devastating on big game and will run a slightly different ballistic path base on their grain weight, wind/weather conditions, and cartridge muzzle velocity.

Both are devastating on big game and will run a slightly different ballistic path base on their grain weight, wind/weather conditions, and cartridge muzzle velocity. 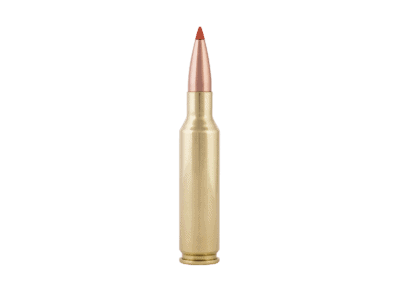 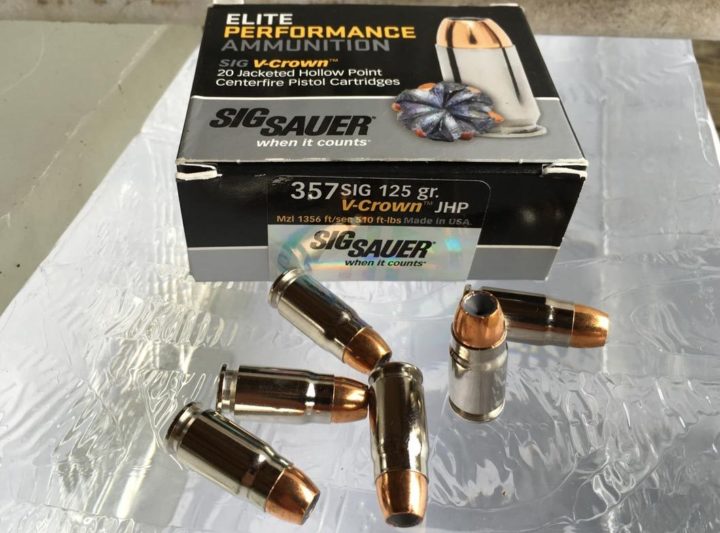 Sig Sauer was once a handgun manufacturer for the most part and not much more across the American shooting market place. That has all changed today as they are becoming a leader in many aspects of the shooting ports, and also military-based projects.

In this mix of products is the turn toward both rifle and handgun ammunition that is developed with high grade quality in mind. The Sig line, as such, has been under test by me for almost three years to date, and out front in that testing has been the cartridges offered for 6.5 Creedmoor. 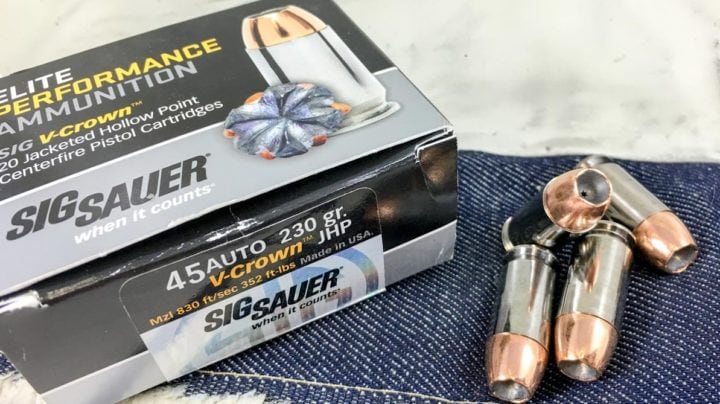 Making use of a JHP bullet allows uniform expansion on large, tough targets. I have shot game with this ammo in the 120 grain offering and gained good results. The bullets are fired at 2875 f.p.s. at the muzzle, and reach a muzzle energy of 2126 ft/lbs.

The ballistics co-efficient on the 6.5 Creedmoor bullet is 0.380, which is in the correct bracket when it comes to big game ammo. The higher the BC, number the greater aerodynamics the bullet retains at longer ranges.

In general, the 6.5 Creedmoor is designed as a very accurate 1000 yard bullet in the grain weights offered. However, I have sent Sig rounds to 1200 and even 1300 yards with positive accuracy against A/T hardened steel targets the size of a human silhouette.

Being Elite Copper Hunting bullets, these cartridges are legal in non-toxic-only hunting areas. Like others tested, these bullets are solid game-harvesting tools to be sure. The cartridges are designed to feed well through AR-10 weapons and also the chassis rifles in turn-bolt longer-range models (Ruger Precision, etc).

I would be classify this round as a good hunting and defense round. Not necessarily a long-distance high performance cartridge. 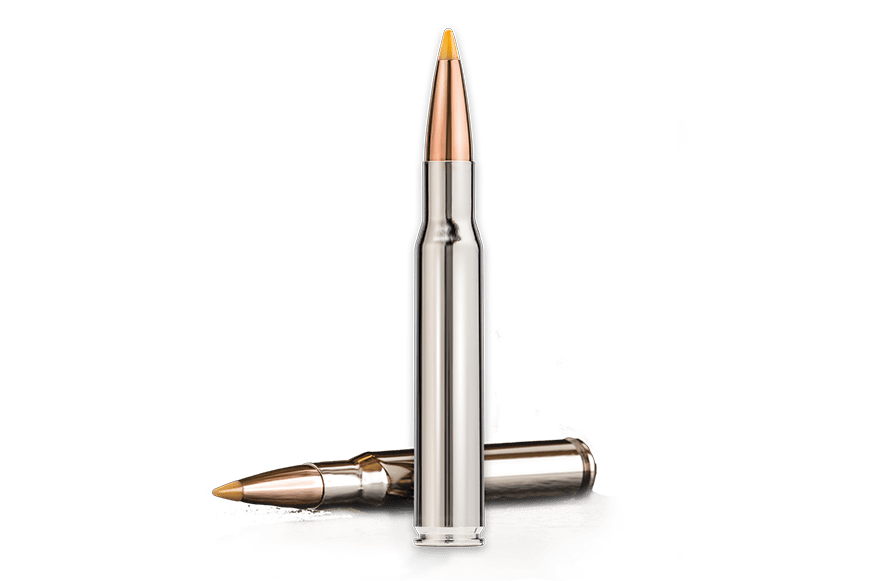 The price of Sig Sauer 6.5 Creedmoor varies, so check the latest price at Brownells. 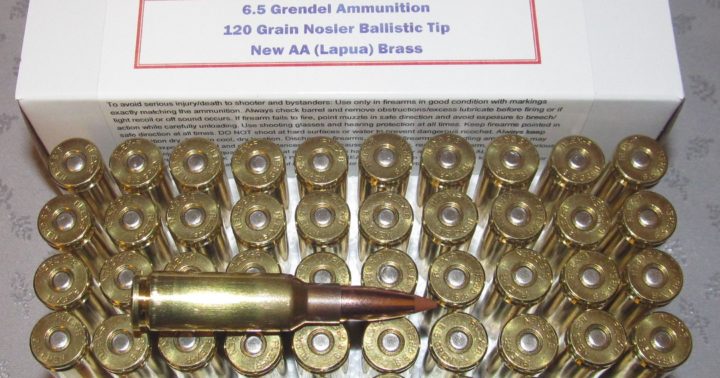 This manufacturer offers a 120 grain Spitzer-designed bullet in the 6.5 Creedmoor that is a part of the company's long-standing contribution to the shooting sorts industry. This E-Tip bullet is built to high standards and expands on warm targets with control.

I have shot coyote at 400 yards, through mule deer, with this ammo, and I can say that my loss rate has been almost zero over the years. The ballistics tip was branded by this manufacturer in that they were the first company to develop such a revolutionary bullet at the time.

Nosler, like others, is on top of the 6.5 Creedmoor, both in factory offered ammo and hand-loading bullets as well.

I have included a ballistics chart illustrating the Nosler 120 grain E-Tip Spitzer's performance out to 800 yards. This is a hunting bullet and not a target-shooting bullet for competition. If that were the case, the material would be of a different type, and the bullets' BC would also be higher.

The price of Nosler 6.5 Creedmoor 120 Grain varies, so check the latest price at Brownells.

Almost five years ago I was asked by Hornady Ammunition to take part in a controlled hunt and then a follow-up long-range event in order to gain some insight as to writers' opinions regarding a brand-new bullet design.

The bullet was the ELD and we shot selected large deer at long- and close-range for the net effect when measured of the new bullet's performance profile. 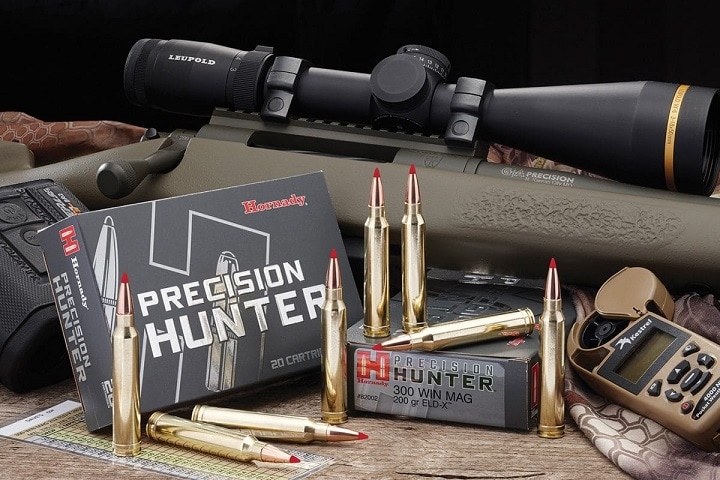 ELD, when developed, was and still is a game-changer, as many other brands headed for the drawing board to figure out just what Hornady was doing in terms of bullet design and how were they getting the kinds of retained velocities and energy at long-range that were being published.

After shooting animals and measuring the results, we were turned loose on Hornady’s brand-new Doppler radar system as we tracked bullets out across 2000 yards of open air when shot at long-range targets to 1500 yards, for testing.
In effect, Hornady had broken the mold. 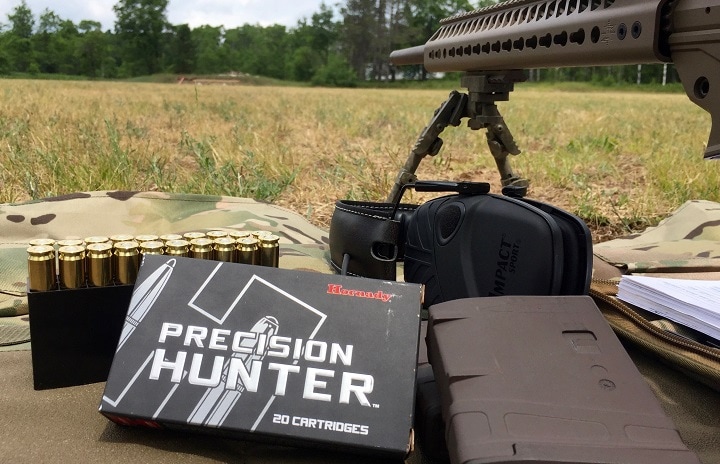 And by way of their special bullet tip (Heat Shield), and the massively high BC figures associated with the bullet with a long sharp nose (ogive), we were seeing the dawn of a whole new generation of sleek, fast projectiles being built as match-grade rifle ammo for big game hunters and target shooters alike.

As Hornady developed and the offered 6.5 Creedmoor was coming into its own, it was only natural that the new cartridge would be offered in the also brand-new ELD bullet design. Putting this team together, what you now have is one of the best long-range 6.5 cartridges available to modern man. 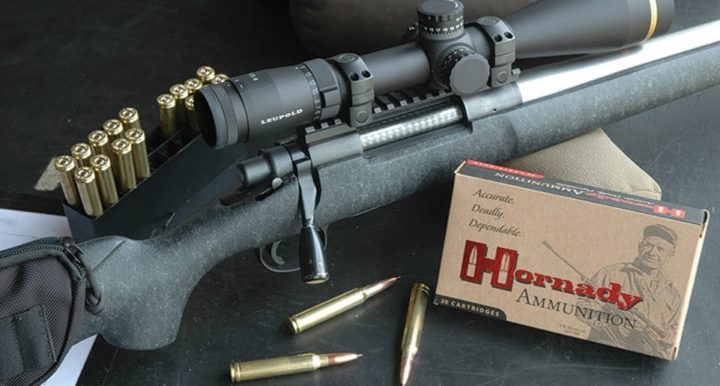 The 6.5 Creedmoor is a Hornady brainchild, and they pressed forward with the round until today they are making it a world class success.

The ELDS are designed to expand at a uniform rate across the world and range from as close as point blank to 400 yards. These bullets, due to the very high BC rating, are punching well beyond the above stated range limits and, as such, are outstanding long-range pills when sent against even ¾-mile targets.

The bullets hold a solid flight speed above subsonic velocities, and even the trans-sonic zone offers a stable bullet that will not roll or yaw.

The price of Hornady Precision Hunter varies, so check the latest price at Brownells.

This Silvertip is an old bullet in the manufacturer's line that has been revisited by the company in that today it retains a poly tip streamlined body that has a boat-tail design to it as well. BC is higher on the ammo built today, and the bullet retains a solid base for maximum grain weight retention, even at close-range. 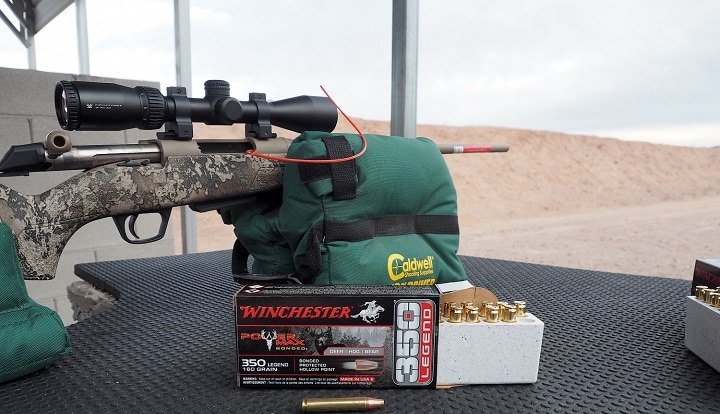 This is a 140 grain bullet designed for long-distance big game hunting. The longest measured kill on a big whitetail buck I have made was 540 yards. The 6.5 Creedmoor is a deer hunter's dream as stuff falls like a sack of wet grain in front of it.

Here at BR&D, we currently have five different 6.5 Creedmoor rifles. Each of them is sent over time to a different task in testing.

The price of Winchester 6.5 Creedmoor Silvertip varies, so check the latest price at Brownells. 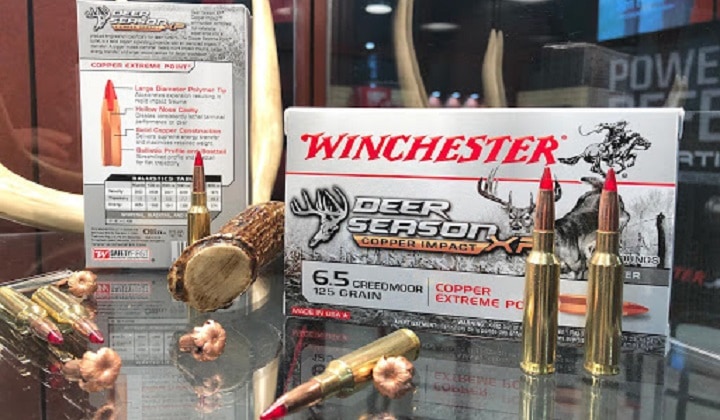 The Winchester 6.5 Expedition is designed as an ultra long-range rifle cartridge. This round carries a 142 grain poly tip bullet with a long ogive that makes the BC on the bullet jump. Long-range demands both speed and accuracy and the bullet will deliver both.

Again, as with the Silvertip bullet, I have used this ammo at over 400 yards on whitetail with outstanding results. In general, I pass out the various test loads each Fall to the members of our deer-hunting group. This manufacturer has been handed the call several times, and we have not lost a deer with this round.

Hunting, in this case, was all wide open big South Dakota Missouri breaks country. Tough sledding for a rifle cartridge.

Advanced bonded jacket core and advanced jacket technology make this a go-to bullet for taking down that trophy buck with a single well-placed round.

The price of Winchester 6.5 Creedmoor Expedition varies, so check the latest price at Brownells. 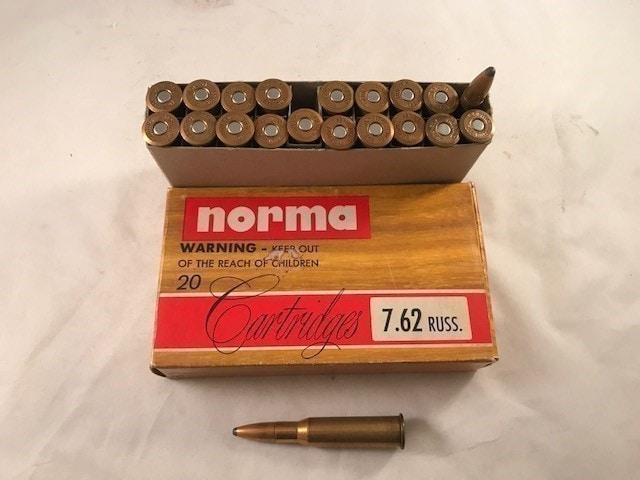 Norma Ammunition offers the 6.5 cartridge in the Bondstrike bullet design. This is a fast mover with a BC of 0.629. That’s stable in terms of retained speed down range.

The manufacturer has designed this cartridge for the hunter who wants to press the Creedmoor to ranges beyond the usual. When doing so, the bullet needs to perform and again, like the others indicated here, hunting Russia for 800 pound Russian Reds (boar) or Rocky Mountain mule deer both require a bullet you can trust. 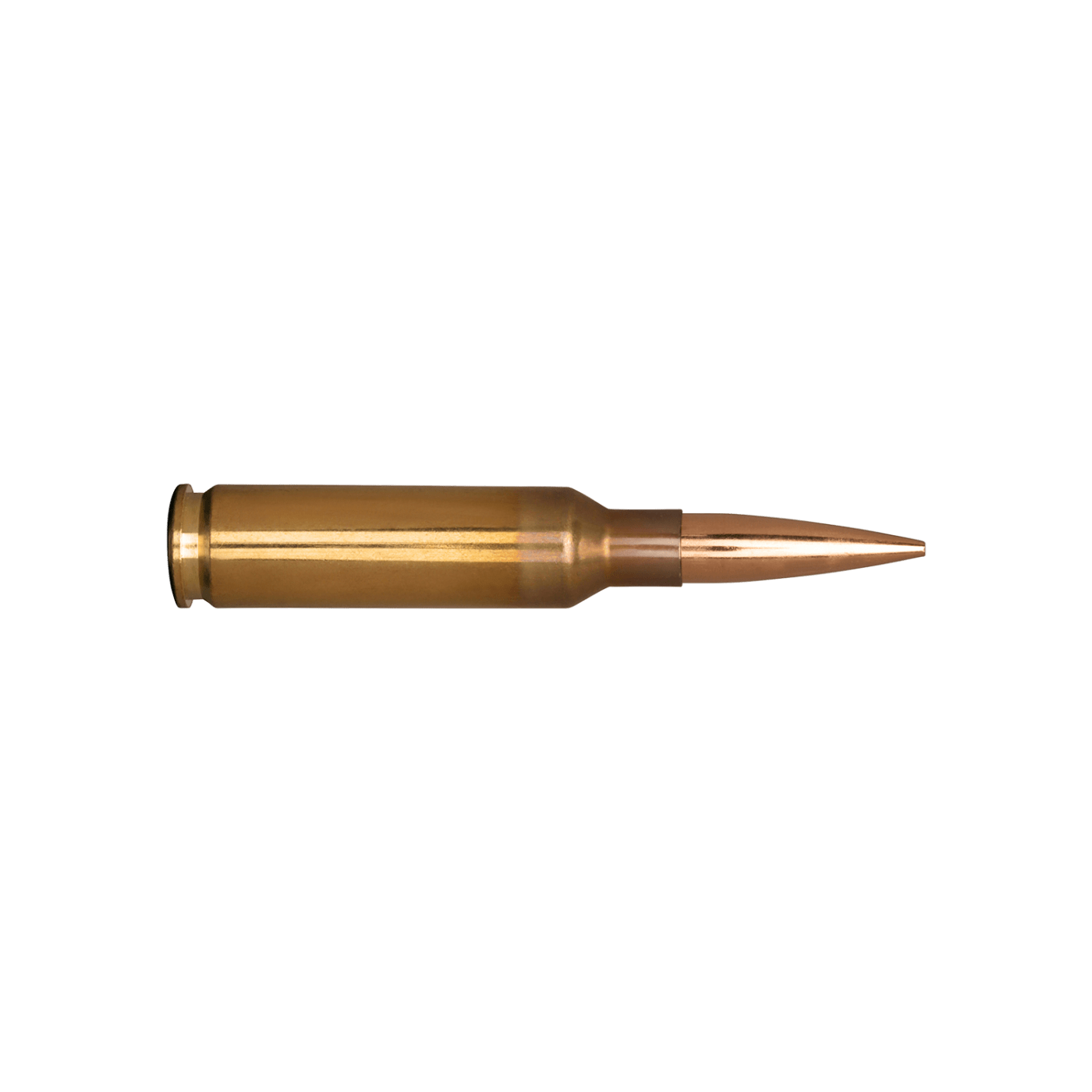 The price of Norma Ammunition 6.5 Creedmoor varies, so check the latest price at Amazon.