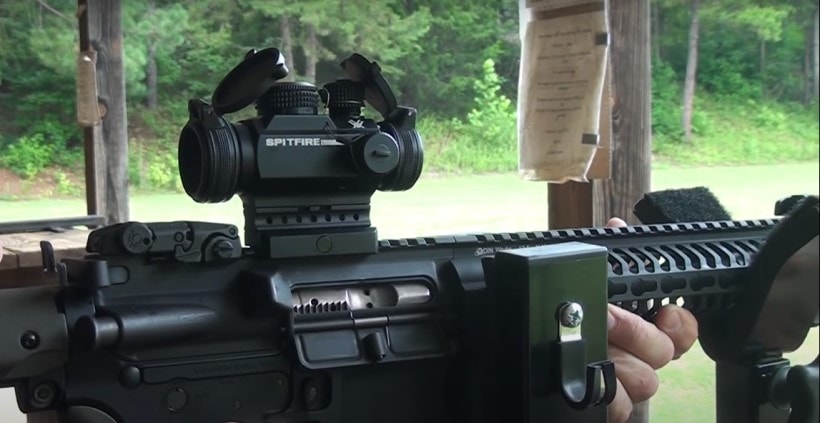 Looking for an optic that offers many of the best features of the legendary (and legendarily expensive) Trijicon ACOG, but at a fraction of the price? That's what many owners have been saying about the topic of today's deep dive: the Vortex Optics Spitfire 3x.

I admit that I went into this review with a lot of skepticism—after all, marketing departments writing checks that their products can't quite cash is certainly nothing new. But I'm a big fan of Vortex's optics, and they've developed a reputation for great value and excellent customer service, so I decided to give this 3x scope the benefit of the doubt and see how much of the ACOG comparison was earned, and how much was hype.

And I've got to tell you guys: this optic is impressive. Is it actually as good as an ACOG? Not quite. Is it pretty close, especially for the needs of most civilian shooters? Surprisingly, I'd say yes! There's a lot to like about the Spitfire, and while it certainly has to cut some corners to hit this price point compared to an optic that costs almost 4 times as much, most of those sacrifices aren't really going to be noticeable for the average shooter.

For a better idea of what I'm talking about, let's take a closer look at what this optic is, what it does, and how it stacks up.

If you've been shopping for optics recently, you've probably seen the term “prism scope” pop up a few times. But what does this mean, exactly? To cut through the scientific jargon and put it simply, this scope uses a tiny glass prism to focus the image and slightly magnify it, as opposed to the series of lenses used in traditional riflescopes like you see on top of most hunting rifles.

There are multiple benefits to this design: you get a small, illuminated reticle that functions like a red dot—meaning fast target acquisition, both-eyes-open shooting, and ease of use in CQB situations—along with a small amount of fixed magnification (typically between 1-5x), an etched reticle in case the illumination system fails, and a diopter for adjusting focus, which makes it much more user-friendly than a red dot for astigmatism or other eye conditions that make red dots difficult to use. It’s also compact enough to give you room for a magnifier on most rails.

There are a couple downsides too, of course. These scopes have shorter eye relief than a red dot, which can be problematic for shooters that prefer scout-style optics or who are used to mounting a red dot farther forward than usual on their rail. You also have to deal with a small amount of parallax, just like with any other magnified scope, but the good news is that at such a low magnification level it won't have much of an impact.

The Spitfire 3x has a few of its own tricks, too. The inclusion of both a red and green reticle option is always welcome – if you've ever done any hunting with a red dot during fall, you know that that dot can get lost in all of the red and orange foliage unless you really crank the brightness.

The Spitfire also has an angled rail section near the elevation knob so that you can mount an offset micro dot, reflex sight, or even backup irons for extremely close-range shooting, which is great if you're interested in 3-gun style shooting that requires rapidly changing target distances, but you don't want to deal with the longer, bulkier variable-power optics and getting the hang of using a throw lever.

For more scope options for 3-gun shooting, check out our guide on best 3-gun scopes. 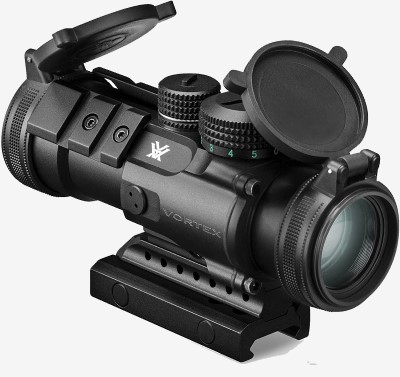 The price of Vortex Optics Spitfire 3x varies, so check the latest price at

What's in the Box?

When you open the box, you'll find the following:

Not bad at all! If I have one gripe, it's that a quick-detach mount would be a great inclusion, since as is, you're left having to unscrew it by hand if you need to remove the optic in a pinch. Still, between the etched reticle and the offset picatinny rail mount, the odds of this ever being a real issue are pretty slim. And since the goal is a budget-friendly optic, I'm ok with cutting some nice-but-not-essential features in order to keep the price down.

In my experience, most shooting applications will benefit from a brightness setting in the 3-5 range, which is powerful enough that you won't lose the reticle or put a drain on the battery life but not so bright that you start to sacrifice sharpness.

The offset rail is another nice quality-of-life feature for shooters who want more versatility out of their setup. An offset micro dot adds an almost unnoticeable amount of extra weight, and in exchange you've got a way to more rapidly acquire and move between targets at close range. If you're interested in competitive shooting, this is a great way to get the best of both worlds without spending an entire paycheck on your optic.

The Spitfire's EBR-556b reticle also includes bullet drop compensator markings out to 500 yards for easy holdover adjustments, specifically matched to the ballistic profile of the 5.56 / .223 round. I'd have to say that 500 yards is probably a bit over-ambitious for this type of optic, but after zeroing it at 100 yards, the BDC hashmarks were dead on and had no trouble ringing man-sized steel plates at 300 yards.

As I mentioned earlier, I am impressed by this optic's performance, especially at this price point. It's a versatile optic for close-to-mid-range shooting, and it feels very sturdy. I haven't had a chance to test it in extreme weather conditions, but Vortex claims that it's fog proof, shockproof, and waterproof thanks to its o-ring seals and nitrogen gas purging, and based on experiences with their other optics, I'm inclined to trust them.

Part of what initially drew me to Vortex Optics as a manufacturer was hearing about how good their lifetime warranty is, and while I've never had an optic fail on me that required me to use it, it's nice to know that I don't have to worry about getting the run-around on what counts as a “defect” or what exceptions aren't covered.

Windage and elevation turret adjustments are nice and tactile without feeling too stiff, and while I'm not a big fan of the coin-slot style turrets (I don't like the idea of scrounging around for loose change or forgetting to bring the right tool to make adjustments in the field), the tethered turret caps are actually designed so that they can be used as an adjustment tool. It's a great touch that offsets the biggest drawback of this turret design in my opinion. 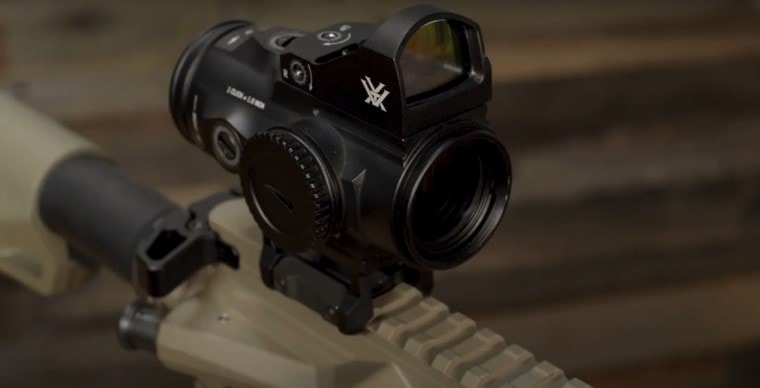 Since this optic keeps getting compared to the ACOG, let's be clear on what this optic is not. Don't expect the same durability as an ACOG. Is it tough? Yes. Is it going to stand up to years of daily abuse in an actual warzone? Probably not. The big question is, do you actually need that level of durability? If you are looking for a patrol weapon optic, it's worth consideration. For pretty much everyone else, the answer is probably no.

It's also worth noting that these scopes aren't designed for long-range shooting or high precision—if you're looking to quickly tag steel targets out to 300 yards or so in a competitive shooting situation, or make quick, clean shots while hunting out in the brush, this is a great pick. If you want a tack-driving benchrest scope, you'll want to look at a variable-power scope with a more precise reticle.

Finally, keep in mind that these scopes aren't capable of absolute co-witness with iron sights. While a lower 1/3rd co-witness is still possible, the fixed magnification power makes a full co-witness impossible. Since the etched reticle works even if illumination is lost, it's really not a problem (especially if you use the offset rail for backup irons), but it's something to be aware of.

In looking at alternative options for this optic, we would be remiss if we didn't mention the Primary Arms SLx 3, which is about the closest thing to a direct competitor to the Spitfire 3x that you'll be able to find.

Looking at these two optics side by side, you'd be hard-pressed to find any real differences to speak of. What it really comes down to is a matter of reticle preference; the Primary Arms prism scope uses their ACSS reticle, which has a horshoe-shaped outer ring and a smaller central ring.

The Primary Arms reticle feels a little bit faster at close ranges, while the Spitfire's feels better at medium range. I would also say that the Primary Arms illumination system is slightly brighter, but PA's warranty, while still fine, is not quite as comprehensive as Vortex's VIP warranty. 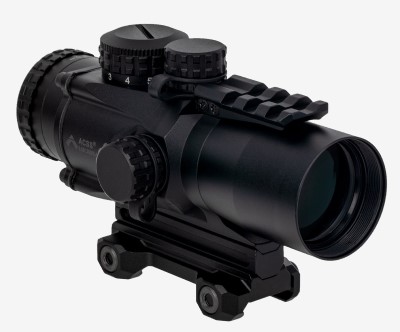 The price of Primary Arms SLx Gen III varies, so check the latest price at

If you are looking for some alternatives for ACOG scopes then check out our guide on best ACOG clones and alternatives.

The Vortex Spitfire 3x is an excellent choice for shooters who want a high-quality jack-of-all-trades optic for general use. With an offset dot sight or irons, this scope would give you an AR platform capable of performing exceptionally well at any distance up to roughly 300 yards, after which the limitations of a low-power fixed magnification optic start to become noticeable.

It’s a tough piece of equipment with clear, sharp optics, it’s usable in bright and low light conditions, and it’s backed by one of the best warranties in the industry - what’s not to like?

Is it going to dethrone the Trijicon ACOG? Not anytime soon, but that's ok. For a fraction of the price, you get a lot of the same functionality, and even a few extra quality-of-life features. In this price range, this is a tough one to beat, and I'd even say it performs as well as scopes that cost twice what this one does.

Vortex continues to impress with quality products that deliver great value at bargain prices. Our goal is to give you enough information to make an informed decision before you buy – without all of the sugar-coating—and we hope this review helped you settle on a scope so you can spend less time researching and more time shooting.

Have you tried this scope out? Do you have any specific questions about the optic that we forgot to cover? If so, sound off in the comments below and let us know! And if you'd like to take a look at some other prism scopes, check out our rundown of the 8 Best Prism Scopes!

Eric Shattuck is an avid hunter and outdoorsman who has been shooting since the age of 15, when his father gave him his first Henry lever-action .22. Growing up in a family of military veterans and game wardens, firearms have been a part of his life for as long as he can remember, and he loves spending time behind everything from black powder revolvers and old milsurp to the latest pistols, rifles, and shotguns. From varmint hunting on the South Dakota prairies to taking down invasive feral hogs in East Texas, Eric has always been passionate about ethical hunting and conservation. As well, he has recently branched out into local-level 3-gun matches, and hopes to continue honing his skills and getting involved in other types of competitive shooting in the near future.