There has never been a time where we’ve had more scope options than we have right now. There are so many different types of optics out there from one-power reflex sights to 40x LRP scopes, and one of the most interesting types of scope out there is the prism scope.

If you’re not familiar with prism scopes, we’ll talk a little about them as well as go over the Primary Arms SLx 5x36mm Gen III prism scope and how it performs relative to the competition. The PA SLx 5x prism scope has a fixed magnification of 5x and an objective lens diameter of 36mm.

A prism scope like this may be the best thing you can put on your AR-15 or AR-10, and if you’re considering a prism scope over a red dot or LPVO, there are some distinct advantages and disadvantages to either choice.

The SLx 5x prism scope is great. The image quality is clean, the clarity is good, the light transmission is nice and bright, and the 5x magnification is enough to get out to 200 yards depending on the size of target you’re aiming at. It faces some stiff competition in the low-power optic market from the likes of Vortex, Holosun, and Trijicon, but it does well and holds its own. 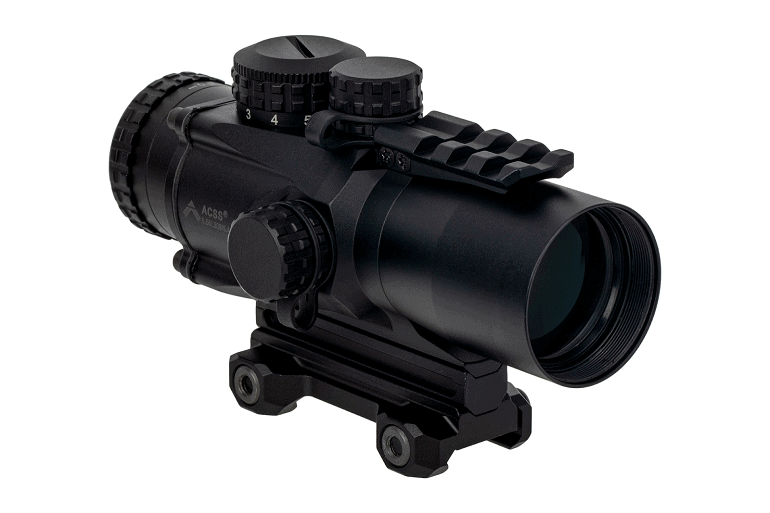 The durability you get is impressive for the price, and the ACSS reticle (two variations to choose from) helps make target acquisition almost as fast as with a reflex or holographic sight. It’s not compatible with night vision but it is illuminated with both red and green. A lot of improvements were made over the Gen II including the new “ruggedized mounts” for more mounting options.

As of right now the Gen III is available on Primary Arms website. Read on to find out if you should pick one up. 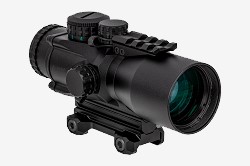 The price of Primary Arms SLx 5x36mm Gen III  varies, so check the latest price at 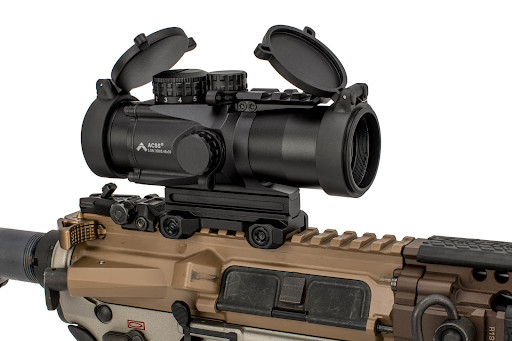 What Is This Scope Supposed to Do?

A prism scope fills a similar niche to an LPVO (low power variable optic) with some crossover to a red dot sight. In fact, the best way to think of a prism scope is probably as a red dot with a magnifier, since that’s the way they’re used. Prism scope reticles are often better for shooters with astigmatism.

A prism scope has a fixed magnification in the 1-5x range and is supposed to be a flexible optic that can be used effectively both up close and up to 100-200 yards. At 5x, the SLx Gen III is supposed to work on the longer end of that range, where you really don’t want to use it to engage targets closer than about 25 yards, but can reach out all the way to 200 yards in a pinch.

Other well-known prism scopes include the Vortex Spitfire and the Trijicon ACOG. 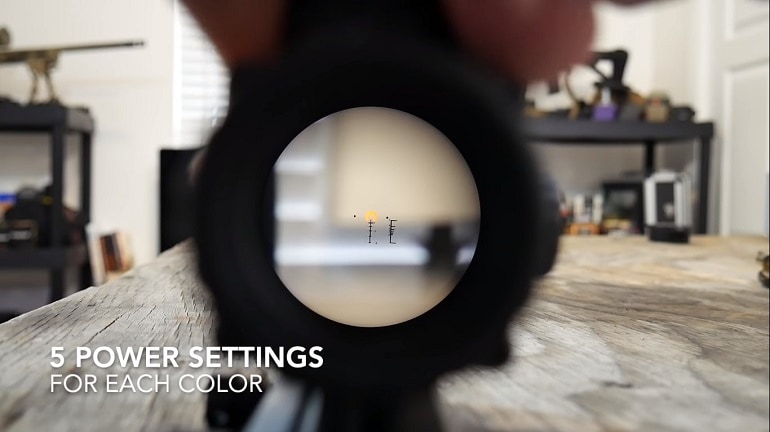 The SLx specifically has an ACSS reticle in two flavors. You can get the ACSS 5.56/.308 reticle or the ACSS Aurora reticle which is Mil-based and better for other ammo. The ACSS works really well with the 5x magnification because it gives you rangefinding capabilities along with a BDC ladder for estimating holdovers and dots for wind holds and target leads as well.

The reticle is illuminated in both red and green, which makes illumination helpful in both daylight and night, and you even get .25 MOA turret adjustments to maximize accuracy at long range. Combined with a lifetime warranty, if 5x fixed magnification is what you want, you can’t go wrong with the SLx Gen III.

The bullet drop compensation on this is fantastic for a prism scope, and I would argue one of the best in its class. If you think you want to pick up the Gen III, you can do so on Primary Arms’ website.

The price of Primary Arms SLx 5x36mm Gen III  varies, so check the latest price at

What’s In The Package

The scope comes with flip-up lens caps and an AR height riser. The caps are nice, especially since not all scopes come with them (I will never understand that), and the AR height riser makes it easy to get it up high enough to mount effectively on your AR variant.

The Aurora version is different from the 5.56/.308 version, although there are a lot of similarities. I’m going to go over the 5.56/.308 since that’s the one I have access to, so while a lot of this will apply to the Aurora as well, you’ll want to double check. ACSS stands for Advanced Combat Sighting System, so if that doesn’t give you a hint as to what this riflescope is designed for, I’m not sure what will.

The ACSS is no joke; it’s full of helpful information if you’re shooting out at long range. If you don’t want to shoot beyond 100 yards with your prism scope, then this is mostly just noise. Here’s an explainer image I threw together to show you the ACSS reticle: 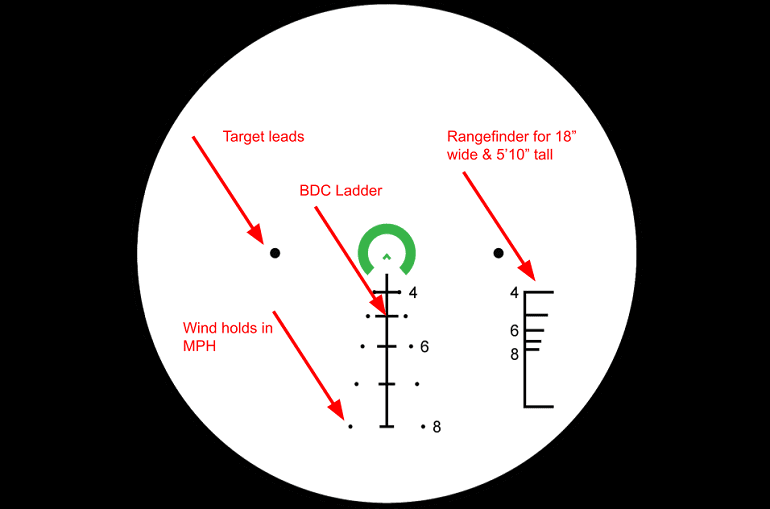 All of that except the chevron and horseshoe in the middle and possibly the target leads is useless at short and mid-range. That said, it’s also fairly easy to ignore when you’ve got the big, bright, green or red center that can function like a red dot, and even better in some cases.

At close range, it’s really easy to just put the target inside the horseshoe and pull the trigger. Despite the parallax and magnification, target acquisition can be even faster than a red dot. The reticle isn’t the only important thing to consider about a prism optic, though, and there’s more to the SLx Gen III.

Another advantage of the fixed magnification is that you don’t have to worry whether the illuminated reticle is first focal plane (FFP) or second focal plane (SFP) because the sight picture never changes.

As I mentioned above, prism scopes in general have great image quality compared to traditional lens scopes as a natural by-product of the way they’re made. For the SLx Gen III, though, the image quality is everything you’d expect from a prism scope, and more than you would expect from this price point. 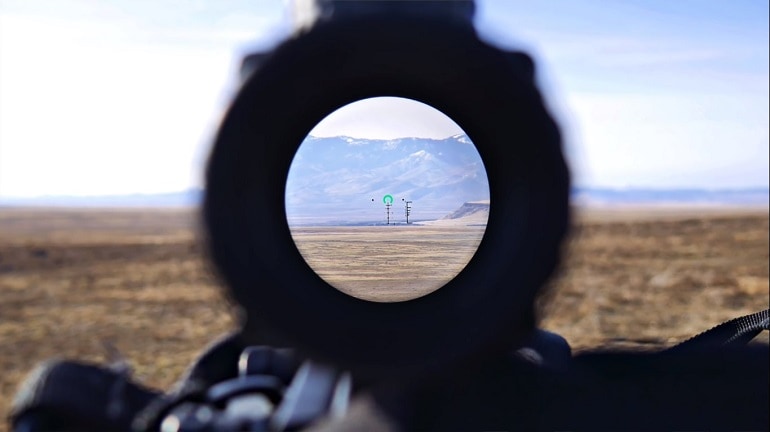 No, it’s not as good as an ACOG, but it’s also a fraction of the price, and considering that an LPVO with similar image quality would cost more as well, the SLx more than holds its own. The field of view at 100 yards is 18.8 feet.

Shooting at 200 yards is definitely possible with the 5x, and the accuracy and precision are surprisingly good. The windage and elevation turrets are stiff, which is not a big deal unless you’re doing a lot of adjusting with them, and it’s possible that they would loosen up a little bit over time. As mentioned before, most of the reticle is just decorative until you get beyond 100 yards.

It mounts directly onto a picatinny rail and will work well with a carbine or anything you may using for a CQB (close quarters battle) situation, home defense, and any shooting up to 200 yards. With the etched reticle, it’s not necessarily a big deal if the battery runs out, and the CR2032 batteries are easy to find and cheap to replace.

The scope holds zero really well and the image is nice and bright, even in dusk. The green illumination is bright enough to use in daylight and the red works great in low light conditions. The fixed 5x magnification takes some getting used to; you may find yourself reaching up to adjust the magnification a little bit before you remember that it doesn’t change. 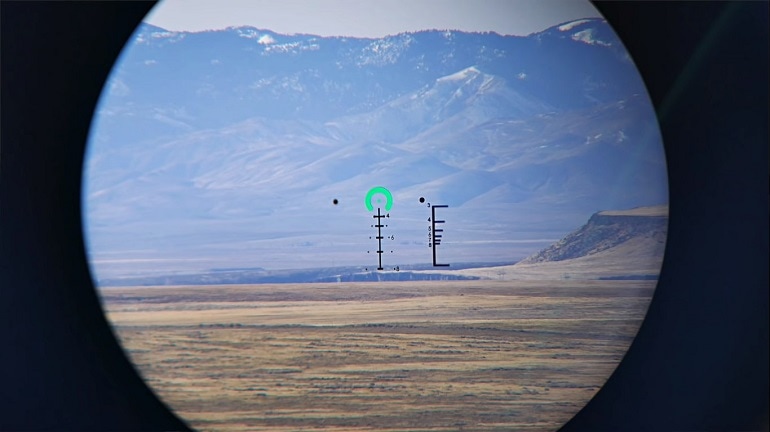 Eye relief is short compared to most traditional scopes, but longer than the ACOG and enough that you should be able to shoot comfortably. The biggest gripes I’ve heard about the SLx are about the ACSS reticle, usually that it’s not enough for precision shooting, and that is true.

The BDC ladder and on-glass rangefinder on the ACSS are never going to give you the same accuracy as a more involved reticle or a spotting scope, but my question is: why would we expect it to? I suppose if you’re using the 5x for certain competitions you may want more accuracy out of it, but the ACSS is designed to get good shot placement quickly, not perfect shot placement slowly.

First-round accuracy with the ACSS is good, and from there as long as you’re paying attention you can close in on a target. It’s not as good for closing in as some other reticles, but it was designed with the first round in mind, which makes it a great choice for hunting, and not as appropriate for target shooting.

If you’re on board with a 5x prism scope but aren’t sure about the PA SLx, you can always look at the ACOG 5.5x50. It’s a lot more expensive but there is no safer bet you can take. I’ve said before and I’ll say it again, the only things that will survive a nuclear explosion are cockroaches and ACOGs.

You can check the current price for the ACOG on Amazon or OpticsPlanet if it’s of interest to you.

The price of Trijicon ACOG 5.5x50 varies, so check the latest price at

If you are looking for more ACOG scopes, then must check out our guide on best ACOG scopes

For me, paying 5 times more for an ACOG just doesn’t make sense when the SLx is already so good. Unless you really want that battery-free illumination or slightly better light transmission and image quality, the SLx is an incredible value. You can shoot with both eyes open, hit out as far as 200 yards and as close as 25 yards comfortably, and it’s a lot lighter.

For a riflescope in this price range to perform this well, if you’re in the market for what it’s offering, then it’s a no-brainer. I think the Primary Arms SLx 5x36mm Gen III prism scope is a great option for law enforcement, military, SWAT, militia, and home defense uses. If you want to learn more about the SLx, you can do so on Primary Arms’ website.