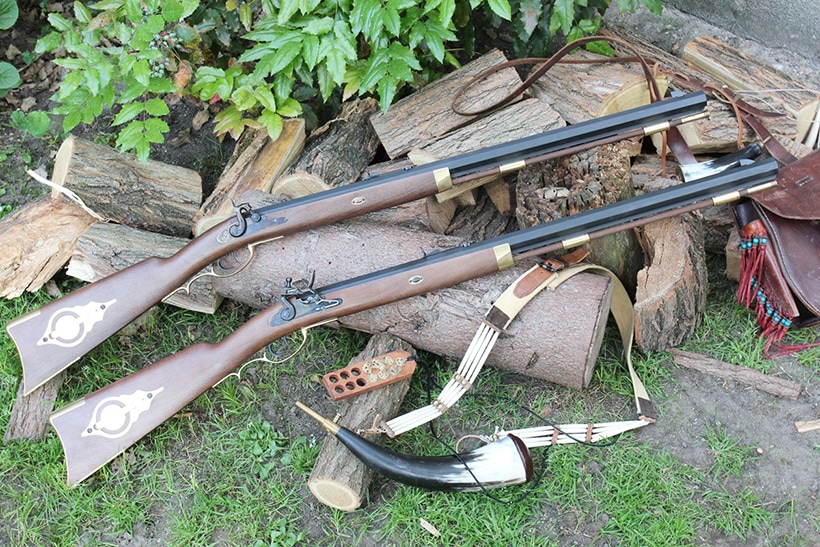 You could have put me in a time machine and sent me back 200 years as the big whitetail buck crested the ridge and then crossed ground about 100 yards directly ahead of me.

With an easy swing of a well-balanced percussion cap Mountain Hawken, the set trigger dropped off about two pounds, and the big iron hammer crashed against the primer cap, turning the air directly in front of me into a flash of yellow light.

As the big gun rolled back almost with an easy push, the sound of 300 grains of sabot and bullet could be heard slamming into the big deer’s shoulders.

In a few seconds it was all over, and now winter meat and a trophy horn were down in a fresh bed of snow, ready to be processed.

What You Need to Know

Muzzleloaders are divided into three main groups. The first is the oldest model of this firearm type and are dressed as flintlock ignition systems. The second group are the caplock guns, and the final group are the modern inline systems.

All muzzleloaders have one thing in common, however, and that is that all of them take the charge or pellets of powder directly down the muzzle using a ramrod. Fixed ammunition such as rifle cartridges or shot shells are not a part of this program.

Flintlocks have an advantage because they function at the receiver using a powder pan and piece of flint held in place on the leading edge of the hammer.  The hammer and flint generate a spark when the trigger is pulled,igniting the powder in the pan and setting off the powder in the bore.

While caplocks are an advanced design from the flintlock, these guns require priming caps, as do the inline modern muzzleloading systems. Run out of caps or primers and you’re dead in the woods.

Back in the old days, a hunter or Indian fighter could make black powder if needed, but priming caps are a whole other story.

8 Best Muzzleloaders For The Money

The Traditions Hawken Rifle illustrated here is a .50 caliber rifle in the very same style used by the mountain men that hunted and trapped in the great Rocky Mountains of the American west.

All fittings on this muzzleloader are pore brass and well set to the stock configuration.

This muzzleloader is very close to my personal Traditions brand caplock Mountain Hawken 50 caliber rifle.Except for the black iron hardware and a bit of extra barrel length in my mountain- style rifle, the two guns are alike in many respects. Regarding accuracy, the Traditions rifleis spot on at 100 yards, and my gun has harvested two whitetails and several raccoon critters over the past two seasons here in my Black Hills of South Dakota.

I achieved this shooting Hornady conical bullets with sabots, and a loose 100-grain charge of Hodgdon Pyrodex as a clean-burning muzzleloader propellent.

At the time of writing, the Traditions Woodsman  is priced $499.99 but it varies, so check the latest price at Cabelas. Pedersoli builds quality muzzleloaders, and therefore commands a higher price for their products. I own both a Sharps 45-70 Government centerfire buffalo rifle, and a 12-gauge double-barrel muzzleloader of theirs as well.

Workmanship is old-world quality, and these guns deliver the mail in both smooth bore and rifled muzzleloader firearms with a high degree of accuracy.

At the time of writing, the Kentucky Flintlock  is priced $649.00 but it varies, so check the latest price at Cabelas. Percussion caplock muzzleloaders are similar to the flintlock regarding model designs, but you will find more options of different brands and types in this ignition system.

Why? because, according to some shooters, the priming caps are easier to use and increase dependability.

Much like the flintlock Pedersoli shown above, the caplock sells for about the same price, but witha more advanced firing system.

My Traditions Hawken is exactly like a flintlock gun, but  mounts the percussion cap firing system over the older and more primitive muzzleloading system.

The term “primitive” is not a put-down here, but an actual following of some muzzleloading shooters. The more old-school and historic the gun system,the better to these hunter/ shooters.

This Hawken pattern muzzleloader in a percussion cap model is a plains-style muzzleloader largely because of its extra barrel length.

As western expansion in the country evolved, so did the need to gain added range when used for basic defense or the taking game for the table.

This long-barrel Hawken Missouri rifle will produce accurate shot with its 1-24 twist and six grove-rifling up to 200 yards or more, depending on the hunter.

This rifle is very true in detail to the original mountain man rifles that covered the American frontier. Hand-crafting in this case is a standard.

At the time of writing, the Missouri River Hawken  is priced $1,449.99 but it varies, so check the latest price at Cabelas.

In terms of the ultra-modern muzzleloader, the in-line gun is without question as close to a centerfire high-power rifle as you’re going to find. In-line firing systems are installed at the barrel’s breech behind a bolt-action receiver, or a hanged action setup.

Either way, the standard rifle or shotgun primer used in modern ammunition stays dry in wet or cold weather, making it a very dependable system.

Several years ago, a guy named Johnston developed an inline muzzleloader based on the Mauser high-power rifle action. I shot this rifle in 50 caliber with a powder charge of 200 grains and a 300-grain bullet to 400 yards with dead-on accuracy that would cleanly take an elk.

At the time of writing, the Remington Model 700 Ultimate Muzzleloader  is priced $849.99 but it varies, so check the latest price at Cabelas.

Click here to check out the Best Scopes for Remington 700 Rifle.

Pictured is the current production Johnston 50 caliber ultra-long range muzzleloading rifle that is based on the Remington Model 700 rifle action.

Shooting my Remington-built Johnston-designed rifle, I have harvested whitetail deer to 200 yards without holdover, and stone-dead deer with frontal shots that allowed sabot bullet recovery within the animal’s rear quarters.

This rifle/muzzleloader will stand with most heavy- bore big-game rifles any day of the week. This is a printout (below) of the basic ballistics associated with the Johnston rifle system.  Note the range extension and energy retained at long range on big game animals. I have selected my Remington/Johnston pattern 50 caliber at times over centerfire rifles in the field.

You certainly can save a lot of money by getting closer to your game and by buying other less expensive in-line muzzleloaders. Thompson Center (TC) offers the T/C Pro Hunter FX as a current brand name, but in reality, it is the basic Encore series receiver that can mount both centerfire and muzzleloading systems.

I shoot this system a great deal using sabot 300 grain 50 cal bullets which are actually 45 caliber pills in a sabot sleeve.

This rifle is now 16 years old, has never failed me once, and has taken a pile of winter meat here in South Dakota, including this past 2017 deer season.

Built in stainless steel and mounting a rear breech removable plug, the gun is easy to maintain, and dead sure in terms of very dependable ignition.

Since we are not allowed scopes here in South Dakota during the actual late-winter muzzleloader season, I shoot T/C iron sights in season.

But if I use the rifle during the early regular deer season, I can and do scope the muzzleloader and it is accurate to as much as 250 yards.

At the time of writing, the Thompson/Center Pro Hunter FX   is priced $649.99 but it varies, so check the latest price at Cabelas. This muzzleloader in a .50 caliber weapon is a formidable tool even against bear.

Designed as a break-open making it easy to clean quickly and using a weather-fighter finish, the rifle is backwoods-ready for rough use.

Priced at a very reasonable amount, the T/C is a solid buy for the entry-level muzzle loading hunter.

Today Thompson Center is tied in with the massive Smith & Wesson company and as such, rides the design and development tail this big weapons company has engineered over almost 200 years of existence.

At the time of writing, the Thompson/Center Impact  is priced $269.99 but it varies, so check the latest price at Cabelas. This T/C offering is the top-of-the-line in a third series of Encore break-open in-line muzzleloaders.

As previously mentioned, I have shot this very gun in an older model (20 years to date) and found it to be ultra-accurate and easy to work with in the field.

Now, as offered in the advanced XT series, the rifle retains recoil-assisting reduction in the butt stock, swing right- or left-hand hammer positions, and quick load muzzle design, thereby giving the shooter an easy start with a bullet and ramrod down the muzzle.

At the time of writing, the THOMPSON CENTER - ENCORE PRO HUNTER XT  is priced $1,197.99 but it varies, so check the latest price at Brownells. This is a lightweight aluminum (aircraft grade) rifle that is a hinge-action system and retains recoil reduction in the butt stock as well. The gun is set up as an easy clean and will not require take down to keep it up and running.

For the most part, the rifle is a backpacking or mountain hunters muzzleloader in that every ounce counts when moving uphill or across open country for long distances. Mounting a 28” barrel and cut to .50 caliber, this is no second rate system, to be sure.

At the time of writing, the Thompson/Center Triumph Bone Collector  is priced $649.99 but it varies, so check the latest price at Cabelas.

Which of these muzzleloader rifle did you like the best? Is there one you’re going to add to your collection? Let us know in the comments below! And make sure to check out our list of the best muzzleloader scopes and best scopes for 45-70 rifle.