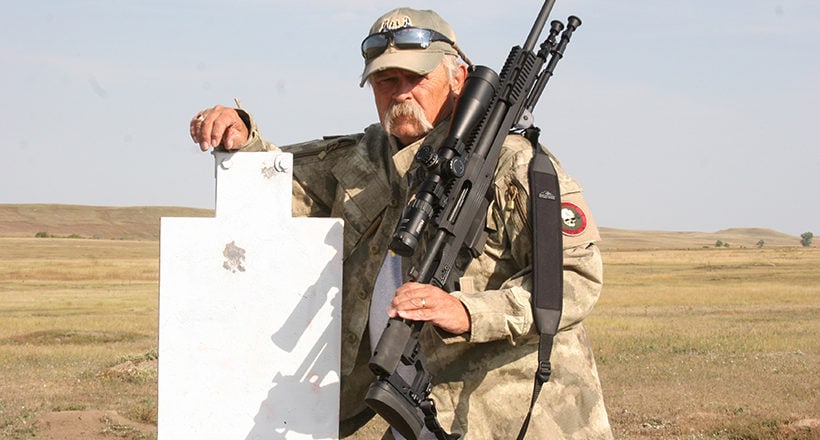 It was the summer of 2015 when the big van pulled up to my drive and two men in very white uniforms jumped out. They went to the rear of the truck and pulled out a large black roll case with two brass combination locks on each side. After signing on a clipboard, one of the men handed me a sealed envelope that contained the combination to the two locks. In effect, I had been presented with a complete packaged rifle in the new Remington 2300 Win Mag, series 2010 US Army sniper rifle that contained cleaning tools, adjustment wrenches, suppressor, night sight system, and extra magazines.

The 75-pound case was the same as the system being deployed in Afghanistan as a replacement for the aging, shorter-range M-24 7.62X51 Nato (308) sniper rifle. While writing my third book on long-range shooting, I had asked Remington Arms if, by chance, they had any samples of military-style rifles that would push past the effective range of the 308 Win.

The answer was short and sweet, and I was told that nothing was ever stated in print. The answer to my question, however, became obvious when the truck rolled up my driveway. Today, Remington offers a civilian model of the Military 2010 in the Model 700 Tactical Chassis Rifle, chambered in the range-extending 300 Win Mag. While not the very same rifle as there are military proprietary elements to the 2010 gunning system, it is a bleed-off of the government rifle design. It should be considered in the event that the shooter is searching for a target rifle or long-range police /paramilitary operational field system.

Be advised that about 99% of the 300 Win Mag rifles for sale today are bolt action models.

These rifles are offered to the shooting public and military/police in two basic platforms: first as illustrated above in the sniper variant long range “Chassis” rifle design, and secondly in the lighter-weight field carry sporter-designed 300 Win Mag rifles used for big game applications.

At the time of writing, the Remington Model 700 Tactical  is priced $2,699.99 but it varies, so check the latest price at Cabela's.

Staying with long-range sniper and target rifles for now, a second introduction in a very impressive gunning system is the Armalite 30-A1 Chassis rifle. This is my go-to rifle much of the time when shooting steel or prairie dog targets to as much as 1400 yards.

Armalite has not only been offering AR-15 rifle designs and was the first to ever do so, but they have also been building accurate turn-bolt long-range rifles for many years, and in this case the platform is solid enough to house even the massive 338 Lapua cartridge.

That stated, there is just about enough send in terms of this rifle’s qualifications as a 300 Win Mag delivery system Hitting a steel plate at 1400 yards with consistency. Shooting the AR 30 A1. Pictured is the Kimber Model 4800 Sniper Rifle in 308 Win. Same rifle is offered in 300 Win Mag. I also have this tool in my series of operation field rifles with the very same optics setup.(currently on loan)

If you want a Kimber, you had been get on the list. The Model 8400 Advanced Tactical is a one- of-a-kind rifle and hand-built down to the last screw. These rifles are a work of art in long-range delivery systems.

Surfaced with a tough resistant coating that resists all manner of nasty stuff, the rifle is very user- friendly in all environments.

Offered with a Manners folding stock on the generation II, or the McMillan one-piece system on the first-generation rifle, the systems are designed to fit most body frames encountered. Even in 300 Win Mag, the stocking on these two rifles makes for a very manageable recoil-reducing system. Savage currently offers a massive lineup of large caliber long-range rifles, and while this Model 110 300 Win Mag gem is a bit old, it still available on the open market. It has served me well as a 1600-yard steel target system over the past several years.

At 13.4 pounds empty, the rifle is a handful, but when her glass sights are locked on a target about ¾ mile away, that extra weight is a real friend in terms of maintaining dead-on crosshair accuracy at the drop of the trigger’s sear. New for 2017, and on order now by this writer, the Ruger Hawkeye Long Range rifle that is currently only offered in 300 Win Mag is a very hard rifle to find. Like other Rugers, it will break loose over time, and when it does, it is going to make a dent in the target long-range rifle market.

With a market listing for the budget-minded ($1,139.00), it is a remarkable buy for the shooter who wants quality at a working man’s price tag. Judging from what I saw by examining it at SHOT this winter, I rank this rifle high on my list, if it shoots. (I own the rifle in a Predator model now chambered in 6.5 Creedmoor and believe me, you can take it to the bank; it shoots.)

At the time of writing, the Ruger Hawkeye Long Range  is priced $1,099.99 but it varies, so check the latest price at Brownells. As has been previously illustrated, the first rifles reviewed were all target or professional-grade field equipment. Snipers, police sharpshooters, government agents, private contractors, and all manner of the new 21st century next zip code long-range target shooters are, for the most part, product buyers. Author with his CZ American in 300 Win Mag. This nice mule deer buck was taken at 210 yards head on with a single round.

While my CZ American is a custom-shop special in that it started its life as a 30-06, but was re- barreled to 300 Win Mag, the basic heart of my rifle is still a model 550 American.

As to how the rifle has performed in my hands? Eleven deer harvested, no losses, and one out to almost 500 yards shooting the brand new Hornady low drag ELD game bullets. Sold as a scoped package rifle or separate and dehorned (no sights), the Winchester XPR turn- bolt 300 Win Mag is the buy of the year. These rifles shoot straight, function like a smooth- polished diamond surface, and lock down like an Old Wild West town’s bank vault.

With field-ready poly stocks, sling swivels, three-round drop magazine, and a working recoil pad, the rifle is ready to go in minutes. The trigger is a double shoe and retains an even three-pound let off which is desirable for a field rifle.

Hunters that require a rifle for deer season and tack on a few rounds of warm-up shooting each year just can't go wrong with this big game rifle and its price point.

Want to upgrade? Turn to the Winchester Model 70 in one of several upscale grades. Features include polished blue-black steel, American walnut with a quality grain surface, and tightly-fitted receiver that transfers to accuracy.

At the time of writing, the Winchester XPR is priced $567.99 but it varies, so check the latest price at Brownells. The Mossberg Night Train in 300 Win Mag as a package rifle will set the buyer back $811.00 with a 6-34-50mm scope package attached. The Mossberg rifle line has been on the move over the past decade, and some very nice rifles are starting to move up in the marketplace.

The Mossberg Patriot as a turn-bolt has a dignified look about it, and makes use of a horse shoe trigger, a nicely-appointed rosewood forend cap, and pistol grip adornments.

With European walnut stocks making use of a quality grain surface and a bolt decked out with a barber pole pattern, the rifle is dressed quite well.

At the time of writing, the Mossberg Patriot Night Train is priced $629.99 but it varies, so check the latest price at Brownells. Tested for a full year, the deer rifle (big game) variant in the Montana hand-built turn-bolt Model 1999 was nothing but outstanding in every respect. Built as a remake of the tried-and-true Model 70 Winchester, this rifle is pure art in gun building.

This rifle is a fine choice in an upper-end magnum bolt action when considering the 300 Win Mag as an option for big game. $3,000.00 depending on options. Partner needed my rifle for a 320-yard shot on open ground. He did well.

While I do own Weatherby MK V's in high-grade wood and metal, I tend to favor the Weatherby Vanguard when it comes to taking to the field in rough weather. This Weatherby “Back Country” model is weather-resistant at every level, and a great mountain, or long-haul overland rifle. Accuracy is sub moa level, and the rifle’s basic function is flawless.

At the time of writing, the Weatherby Vanguard is priced $890.99 but it varies, so check the latest price at Brownells. While the majority of 300 Win Mag rifles are bolt guns, there are autoloading systems available as well. Enter the Noreen AR-300 Win. Noreen and I go back about a decade, and I have shot their offering in a 50 BMG for many years. These rifles, whether the big 50 or the AR 10 platformed 300 Win Mag, are all built as individual rifles. Every part comes from the Belgrade Montana operation, a custom shop of sorts. No mass parts are stockpiled here, and each rifle is letter-perfect in terms of specs and function. A small but important side note regarding the 300 Win Mag cartridge: The US military has found the 300 winchester magnum rifle to be so effective over the old 7.62 Nato round that currently all Remington M-24 sniper rifles are now being rechambered to 300 Win Mag. This moves the basic sniper weapon from an 800-yard tool well out to 1400 yards, depending on elevation and temperatures.

A Complete Guide to Choosing the Best AR 15 Next post