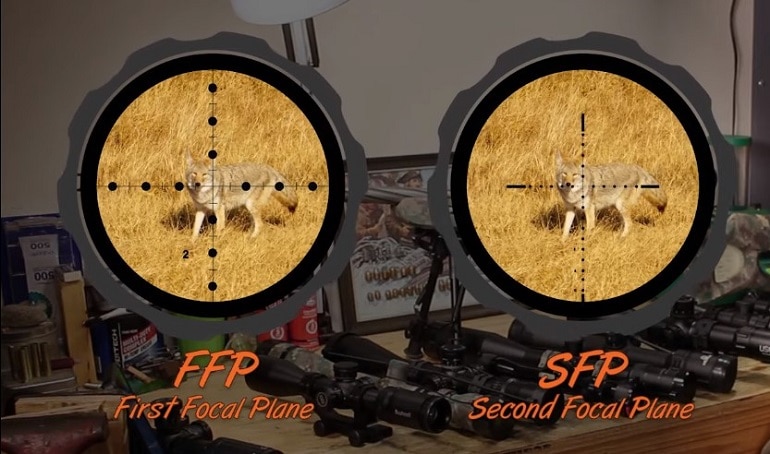 Spend some time using gun scopes and you will eventually learn about first focal plane vs second focal plane scope.

When you look at gun optics, each one is a focal plane scope, even red dot scopes.

For gun scope purposes, the plane is how your reticle appears as you zoom in. Zoom is also the scope's power settings. The short version is:

In a first focal plane (FFP) scope, the reticle gets larger as you zoom. It does not change size relative to the target, because both get bigger at the same rate.

In a second focal plane (SFP) scope, the reticle stays the same size as you zoom. The relative size of the target grows.

I am Ben Baker, a lifelong hunter and fisherman. I've hunted from one end of the US to the other and into Canada. I have optics on guns ranging from a Ruger 10/22 to a .50 BMG.

What Is A First Focal Plane? 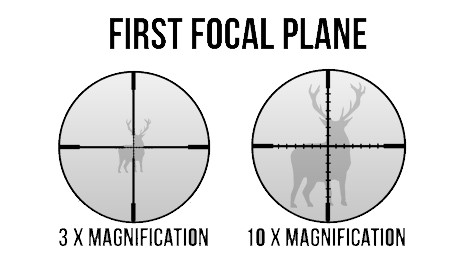 Let's take a deeper look at what is a first focal plane and how an FFP works when you are shooting. A good example of an FFP scope is this Monstrum scope. The illustration clearly shows the reticle gets larger as you zoom in on the target. As you zoom back out, the reticle gets smaller.

This scope has MOA dots along the windage line in the scope. As you zoom in, the space between those dots gets larger. This means as you zoom in, you can get a more precise idea of the MOA adjustments you may need to make when shooting at a long distance.

At the same time, this enlarged reticle obscures more of the object you are aiming at. For a lot of hunters and shooting situations, this does not matter. For people who shoot long range, this reticle enlargement can be a problem. For instance, if you shoot prairie dogs, an FFP scope could hide the varmint at 1,000 yards. Take the shot and you are making even more of an educated guess than normal.

That is the trade off you accept when shooting a first focal plane scope.

The true size of the first focal plane reticle never changes. It just magnifies. To explain, an inch is an inch at one yard, 100 yards, 1,000 yards and more. It just looks different depending on your distance.

What Is A Second Focal Plane Scope?

If you are serious about very long range shooting you need to know what is a second focal plane scope. A SFP means the reticle size never changes no matter how much you zoom in or out.

If you are shooting very long ranges, the reticle will not hide your target. The object's size increases as you zoom in. The relative size reduces as you zoom out. This also means you cannot judge the MOA as accurately as you can with a first focal plane scope.

The second focal plane scopes have been around for decades. The 1st focal plane is a newcomer to the rifle scope world.

To understand the difference between one focal plane and another, think of it this way. Prop up a yard stick 10 feet away. Can you see the 1/4 or 1/8th inch measurements? No. Now bring the same yard stick within two feet of your eyes. Now you can make out the smaller increments. Hold a magnifying glass over the same yard stick and you see the measurements even more clearly and can see the gap between each measurement line as being larger than without the magnifying glass. 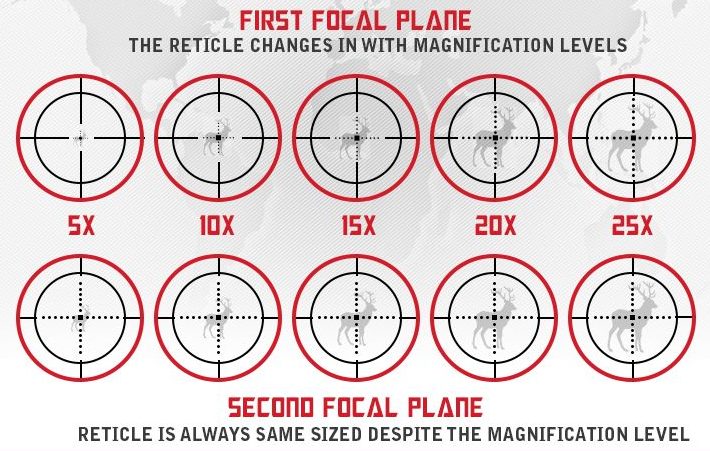 With an FFP scope, you can easily break the MOA marks into smaller parts when you center on the bullseye, whatever that may be. A big deer's chest area is about a foot across. When you zoom in with an FFP scope that has hash marks, the distance between each mark appears to increase. What actually happens is you are getting a closer look at the deer overlaid with an enlarged reticle. You can split the minute of angle adjustments even finer because you see more space.

In a second focal plane scope, the reticle remains the same size. Judging the gap between the marks is more difficult because you do not have it magnified.

Here is another trade-off with the two focal plane scopes.

The first focal plane enlarges and parts of the reticle can disappear from your view. If you need to make adjustments for the wind or distance, you may need those marks. You have to zoom out to get the rest of the marks in the scope's view. This also means your target shrinks relative to your view. A small target may become too tiny to make out through the scope.

In a second focal plane scope, you get full use of all the reticle all the time. However, making fractional MOA adjustments becomes far more difficult. Go back to the yardstick. Can you see a quarter-inch measurement clearly 10 feet away? How about two feet away? These tiny adjustments may not sound like much, but when aiming at tiny targets like ground squirrels, it does make a difference.

By now, you are surely asking which is best? Do you need a first or second focal plane scope? Does it really matter? Is an FFP optic really worth money? The answer depending on the kind of shooting you are doing and your personal preferences.

If you hunt with a good deer rifle at distances under 200-250 yards, an SFP scope is enough. Magnification matters. 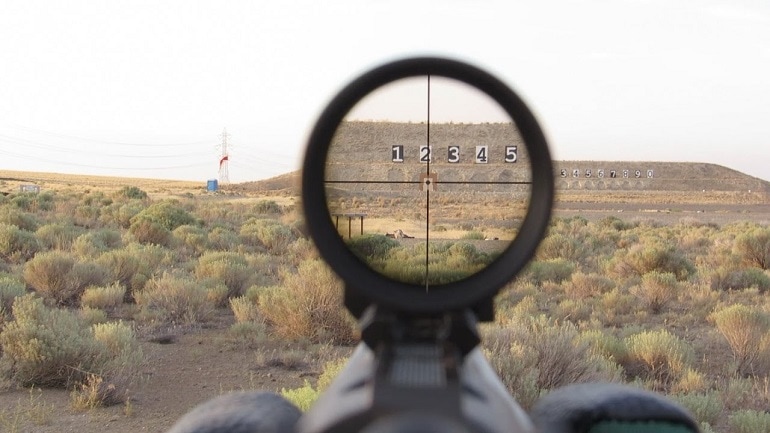 Bryce Towsely says, "If you do all your long-range shooting only at the highest magnification range, this is not an issue and an SFP scope will work fine. One advantage is that you have a strong and easy-to-see reticle even at the lowest magnification."

John B. Snow, over at Field & Stream is a fan of first focal plane optics. He says, "Because an FFP reticle doesn't change size relative to what is being viewed, the shooter can use the reference marks at any power, unlike holdover reticles in SFP scopes, where the magnification needs to be placed at a specific setting, usually the highest level, in order for the hashmarks and holdovers to line up correctly."

Vortex takes a look at focal plane riflescopes in this short video.

Snipers are increasingly moving to FFP scopes because of the ability to dial in the shot at a distance. Hitting something at longer ranges means getting as much precision as possible. This can be done with FFP scopes but not nearly as well with a second focal plane riflescope.

First focal plane vs second focal has to be an individual choice. No scope is perfect for all shooting situations. My .50 BMG has a 1st plane scope. My .45-70 carbines use SFP scopes. I use a variable power scope on all my rifles except my AR 15 which has a red dot.

My cantilever slug barrel on the Mossberg has a red dot and no magnification setting. Close range shooting does not need a much zoom. Long range work does.

First plane scopes tend to be more expensive vs. second focal plane scopes. The accuracy is not based on the scope nearly as much as it is the shooter, the gun and the ammunition. Higher magnification ranges are better in FFP optics. Lower magnification is fine for SFP optics.

Really, all this only matters in a focal plane riflescope. Shotguns with slugs are 100-yard guns at best. Rifles can sling a bullet for miles. In that case, the focal plane riflescope matters a lot and rifle scopes need to meet that need. SFP optics are excellent on shotguns and handguns.

Ben Baker is a lifelong hunter and fisherman. His first experience with a gun was, literally, carrying a cork popgun with his grandfather on a dove hunt. The young Mr. Baker was still in diapers at that time. He has hunted across the United States and Canada with everything from .22 shorts to a .50 BMG. His favorite long gun is the Mosin Nagant in 7.62x54r. His preferred handgun is a Colt Government 1911 in .45 ACP. He may be the only person on the planet to have hunted, and killed, a bobwhite quail with the .45 ACP. His favorite shotgun is the Mossberg 500. For nearly 30 years, Ben has professionally reviewed guns and gun accessories. His writing on many topics has appeared in publications and websites across the planet.