It was some years back during the writing of my second long-range rifle shooting book that I crossed tracks with my first chassis rifle design. The rifle was offered up to the military by Remington Arms. The name of the rifle was the Model 2010, and the price tag was hanging somewhere between $9,000.00 and 12,000.00.

If you included the total sniper package with the rifle, being suppressor, night-sight systems and tool kit, the price tag hit $25,000.00. My point here is simple. Today Ruger Firearms build and sell a rifle very much like that Remington military-designed 300 Win Mag I was testing for book material at the time.

However, in the neighborhood of price and even machined quality, both rifles were close enough alike to give any buyer pause when deciding which one was gong to carry the mail as a target, game or varmint rig in the field. In effect, the following will show that Ruger indeed builds a very solid long distance rifle. 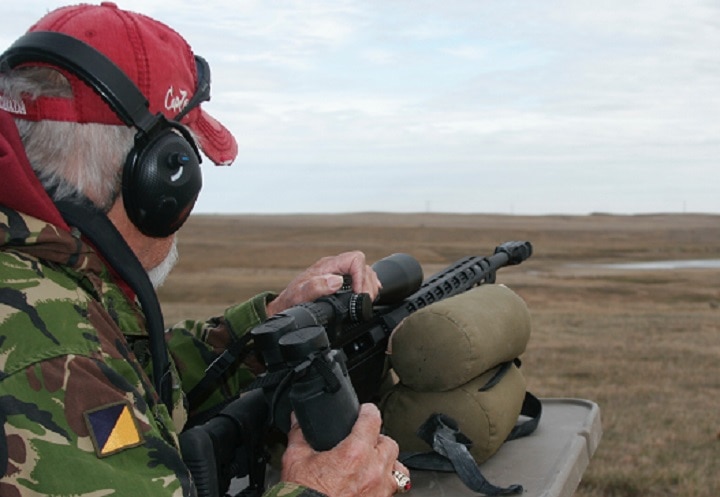 First of all, when discussing the Ruger Precision rifle, you have to home-in on which one of these shooting platforms is being reviewed. Ruger offers rifles from G1 through G3 models in production and when the basic range of cartridge offerings changes from one rifle to another, so will the rifle's size and design.

For example, taking the Ruger Precision in a 6.5 Creedmoor, we see a rifle that is matched to a 24” barrel, versus the 308 model mounting a 20” pipe. Move to the 6.5 PRC and the length of the barrel again moves up to 26 inches.

Secondly, and still another example of the differences in these rifles, while the Creedmoor measures 7.30X3.30 inches, the heavy Lapua measures 7.30X3.50 inches, and comes in at a weight of over 15.2 pounds. That is almost 5 pounds heavier than the Creedmoor, and most others in lighter calibers. 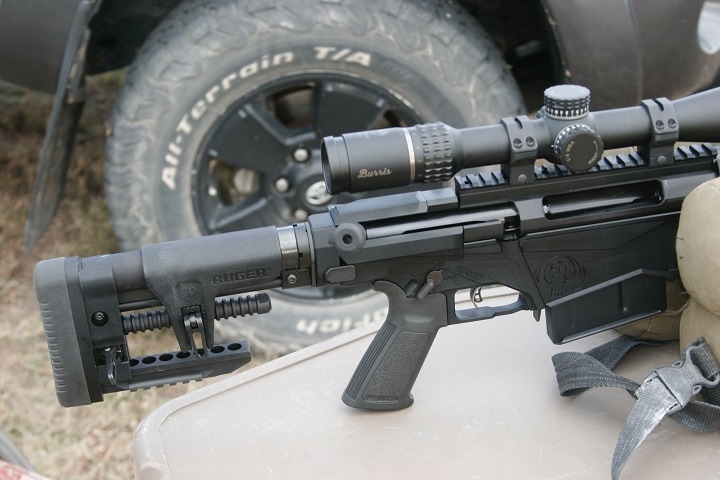 Therefore, the Ruger Precision is not one rifle, but several rifles custom-matched in terms of design to the ammo that they are being chambered.

Also in the mix here is the simple fact that Ruger Precision rifles are generation-rated as well. The G-1s I own, for example, were the first out the gate several years ago.

The new G-3 rifles are current production and yes, there have been some design modifications. Those were largely due to the offerings of additional cartridges that were much more powerful than the early 6.5 Creedmoors and 308 Winchester Magnums.

Shooters could see very early on that these Rugers were being offered at a price that was very affordable and also offered in X class rifles (my term here) that were clearly capable of shooting well beyond 1 mile in competition events.

In effect, what Ruger has done is broken the back of the super high priced chassis rifle industry by selling a very good product with a working man's price point. 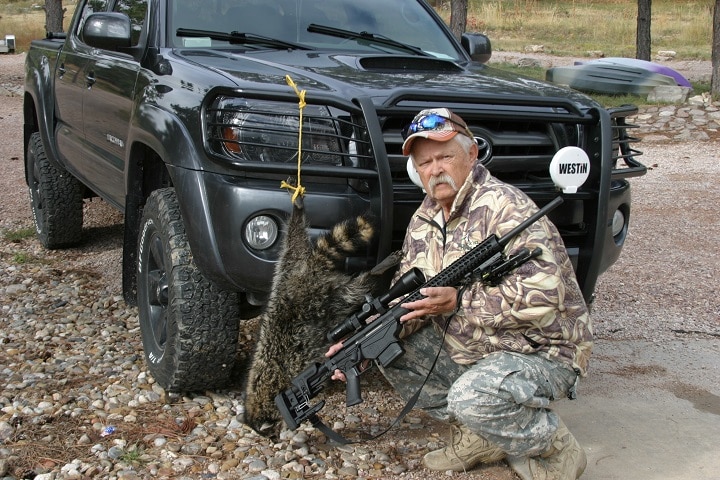 I will start with the big Ruger 338 Lapua and cover the chassis rifle from muzzle to butt stock. In all but weight, length and bore size, the information will follow along the general design of all of these rifles save for change due to cartridge selection.

At the muzzle, the Rugers all make use of a correct and match muzzle break as applied to each cartridge offered in a specific rifle. The 338 has a massive muzzle break, as this is the king of the hill in large cartridge options with the rifle.

This break is basically taken from the military and a side-vented system that drops off recoil a great deal. I shoot the 338 and I have found that I can shoot a 285 grain Hornady ELD bullet down-range to 1 mile, then watch my rifle settle back down and see the bullet impact while not using as spotter.

That means recoil flinch in even this massive cartridge is not a factor at all. Switch to the 6.5 Creedmoor in a 140 grain ELD bullet, or any cartridge using the same 308 Win mag rifle 'mother' case, and you get the same target-spotting reaction at 1000 through 1500 yards.

Moving to the barrel on the chassis rifle, as already indicated, here the cartridge selection made by the buyer will dictate barrel length. Ruger has not cut back at all. Some manufactures offer nice rifles but with the wrong barrel length paired to the cartridge chambering. Ruger is not guilty in this case at all.

The barrels on these rifles are button-hammer-forged, and designed using Russian 5R lands and groove pattern. These barrels are target-rated and will stand up to others at competitive events at longer ranges. The twist rate on the 338 Lapua, for example. is 1.9 375” RH, and will change with each chambered cartridge. 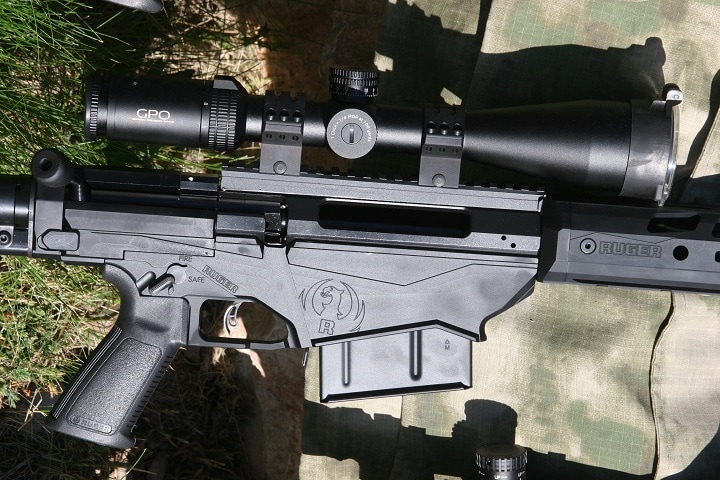 The design of the handguard is like other chassis rifles in that it is free floating and allows the barrel to run untouched from the receiver ring forward. The guard makes use of Slotted M-Lok- and Weaver-style lock-down points for bi-pods and other related accessories, and it is a Ruger-designed and built part of the rifle.

No aftermarket guards used on the factory production rifles.

Moving to the rifle's receiver, the system is an obvious bolt-action and makes use of a modified AI-style magazine of Ruger’s design. This is a five-round magazine regardless of the rifle's chambering. The receiver is one-piece CNC-machined from 4140 chrome-moly steel.

A key to the Ruger rifle's success is that all over the rifle the Ruger logo comes up and in your face. The bolt-action rifle is Ruger-manufactured across the whole spectrum of production. That means that Ruger have total control of design and each part that goes into the rifle. In effect you, the buyer, save in the end. 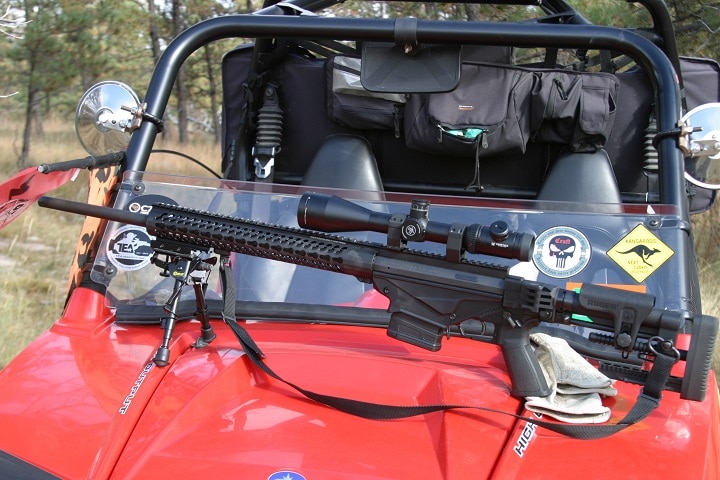 Controls are AR-style in terms of safety and pistol grip pattern used on the rifles. The trigger is the new style adapted from the Savage 'Accu Trigger' design that has now gone public after so many years. It is adjustable and all four of mine came from the factory set at a crisp no travel 2.5 to 3 lbs.

The full range of adjustment is 1.5 to 5 pounds if desired.

The bolt assembly is lug rotating head, and very robust in that it can take a range of cartridges. The bolt handle is large and easy to use, even in winter conditions with heavy gloves or mitts. The bolt retains three lugs, with a full 70 degree throw, and features dual cocking cams and is very smooth.

The bolt body has a nitride-treated hard coat for rust prevention.

Moving to the butt stock, we find a completely folding system and also total adjustments features for height of the comb and length of pull as well. This, again, is all Ruger in design and not found on competitive rifles at all.

In the sight-mounting department, the Ruger Precision makes use of a long Weaver-style rail that has a 20 or 30 MOA cant for increased elevation when mounting a scope sight. The mount allows the use of the largest scopes possible and those required for ultra-long-distance shooting. 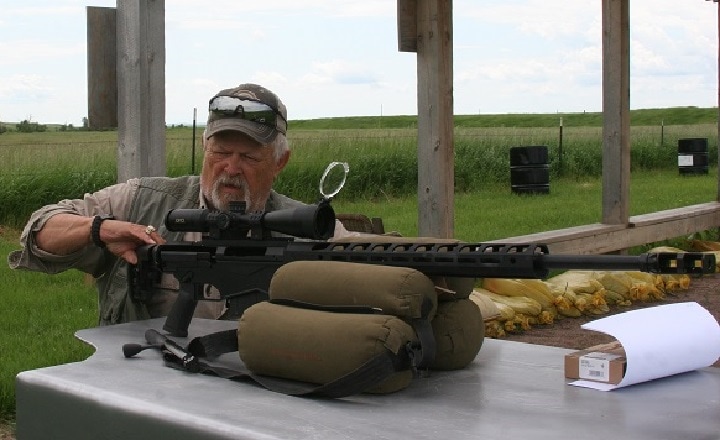 I have a Weaver Tactical MRAD sub-tension scope mounted on my 300 PRC, for example, and this is a 2000-yard rifle and more in terms of the total set-up on the sandbag rest. With optics, my rifle in the 300 PRC weighs in at almost 20 pounds.

Going down-range with the Ruger Precision 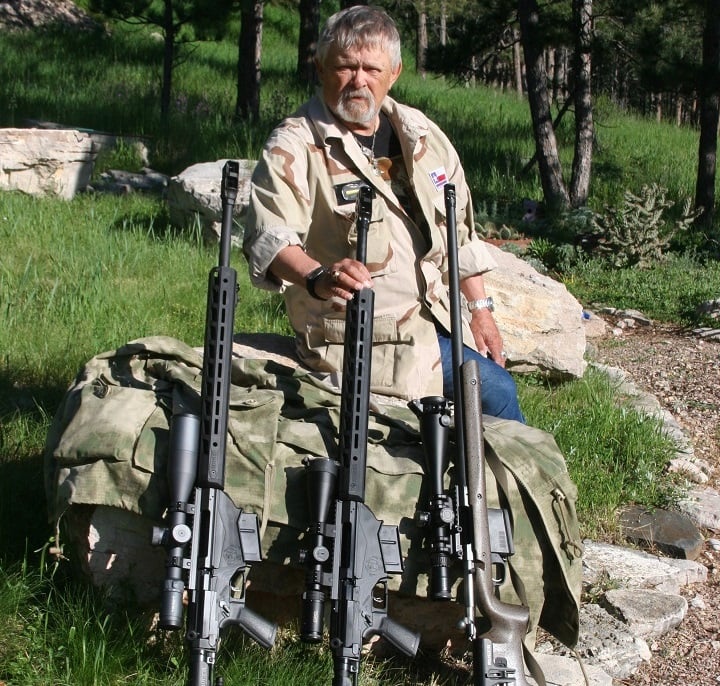 As I have previously indicated, I own several of these rifles. As a part of my Ballistics Research & Development business, I need a number of rifles that all shoot different cartridges. Ruger is a go-to company in this area as I can now afford some rifles that will not break the bank in short order.

Ruger and their marketing decisions have often saved the day for my small research company. Currently, I shoot as part of commercial testing and review-writing the Ruger 6.5 Creedmoor, the Ruger 300 Win Mag, the Ruger 300 PRC, the and Ruger 338 Lapua.

If the company gets into the 408 or 375 Chey Tac, or comes up with a competitive Ruger Wildcat round for the new 3-mile shooting events, then I am interested.

Getting behind a Ruger Precision deals with target shooting for the most part. In terms of long-range shooting, that depends on how much range you have available to you. In many cases, the 6.5 Creedmoor is more than adequate as commercial ranges are not as extensive as our western states' wide open spaces.

Two rifles that get a good deal of my attention in terms of long-range shooting are the 338 Lapua and the 300 PRC. These are the heavyweights in the Ruger Precision line and, as such, shooting them from 1700 yards to 1 mile is not considered out of the ordinary. 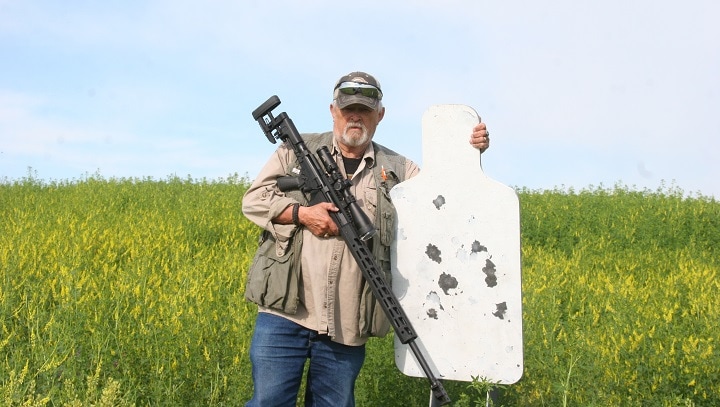 A set-up I often use for targets is a mock mortar emplacement using three blue man targets (one half human torso) and a cardboard mortar base and tube.

Marking the targets with a 4X4-foot blaze orange square, so it can be located down-range at 1 mile, I set my Lapua up on a sandbag rest then factor my elevation MRADS (Bushnell Tactical) and, at 19.4 clicks, check wind adjust for earth rotation, Corioli- effect, and send the round down-range.

Almost four and a half seconds later, I watch for dust coming off the surrounding bare earth in terms of my bullet splash visual, and impact location.

Shooting the Ruger Precision, it is scary how accurate you can get at this ultra-long-range. All that is required when shooting such a solid rifle mounted on heavy bags is getting the DOPE correct. The shot itself is easy. (DOPE = Data On Previous Engagement.) 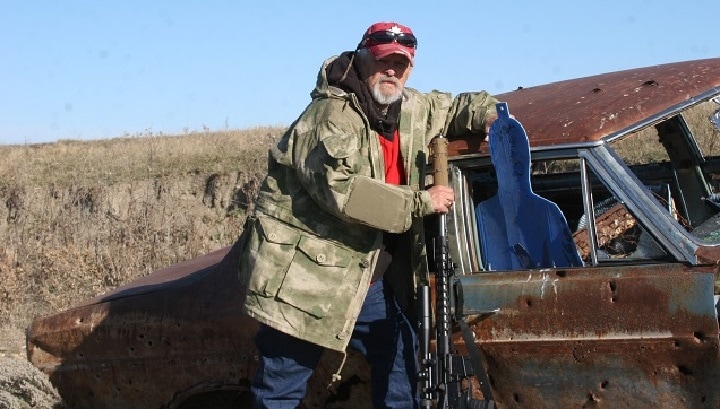 With these rifles, aiming solutions are critical to hit something in the next zip code from the rifle's muzzle. Cellphone computers, Kestrel wind and ranging gauges, or computer-based ballistic programs that are very simple to work with number among the methods used to obtain firing solutions.

Type in the data regarding the bullet and velocity, get the information and adjust your sights for the shot. I carry a notebook in my truck at all times that is about 3 pounds of notes and data covering a dozen different cartridges as well as zeroed rifles. Never leave home without it.

I can locate a target, check the exact firing solutions for the bullet to the target, click my sights to match the required shot, and send the bullet.

Writing some major work for a large shooting publication last year on the Ruger 300 PRC, I set-up on a high hill overlooking a long line of junked cars that were used as rip rap (erosion-control for a stock dam).

I set-up blue man targets inside the vehicles and proceeded to run a sniper exercise across 1200 yards (over half a mile) of open ground while taking out the cardboard occupants. The results were stunning to say the least. 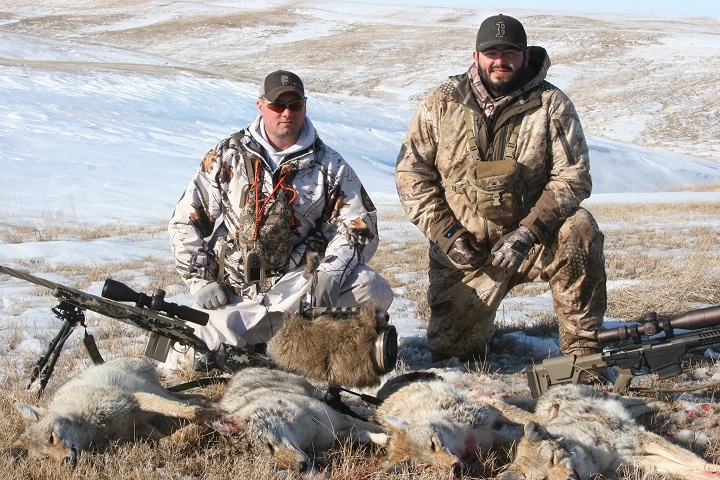 In reality, you can get a Ruger Precision for under a grand in many cases, if you hold up at the 6.5/308 group of cartridges. Move to the ultra heavies. 300 PRC and 338, and you're still into the rifle for a bit over a grand in many cases. The trick here is to shop hard and stay sharp in the pricing department.