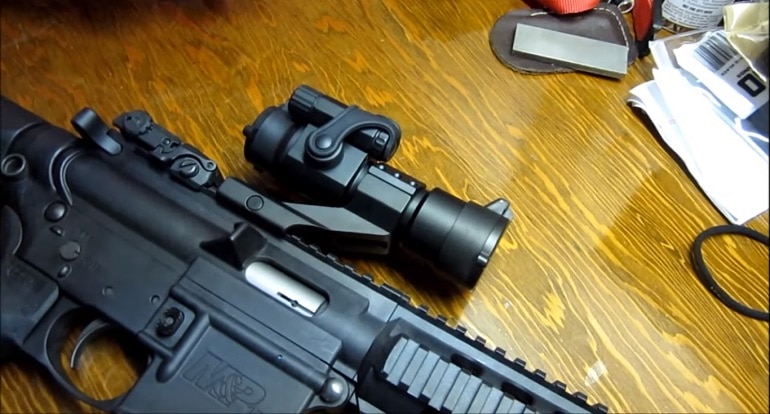 Looking for a rugged and reliable short-range optic to finish off your new carbine or SBR build, but don't have the budget for something like the Trijicon ACOG or Aimpoint PRO? Well consider this your lucky day, because we're reviewing the Primary Arms SLx 30mm red dot sight, which for my money is one of the best budget optics on the market, especially when you consider it occasionally goes on sale for just under $100.

Before we put this red dot through its paces, let's take a look at what this optic is, what it's for, and what you're getting for your money.

Primary Arms' “Silver Series” (designated by the SLx in the name) line is aimed at shooters who need a high-quality optic that won't break the bank, and they've been one of my go-to options for budget rifle builds for years. Their Advanced Red Dot, also referred to by the mouthful of an acronym “PA30MMRD-AD,” is the latest model of their Classic / Gen II red dot sight. 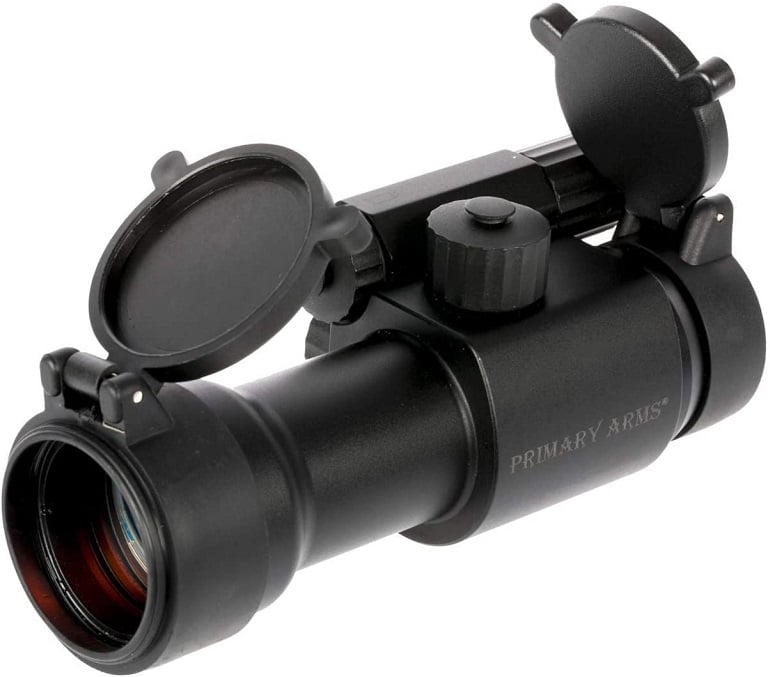 The Advanced 30mm RD is a no-frills CQB optic, with a crisp 2 MOA dot, a 14,000 hour battery life on medium brightness, and a true 1x field of view—if there is any slight magnification, it isn't enough for me to tell, unlike many other red dots at this price point that are often closer to 1.2x. It’s obviously not as compact as the PA Micro Red Dot Sight, but it’s still pretty lightweight at just under 12 ounces.

Like other red dots, this optic is designed for close quarters shooting, and offers all of the benefits you'd expect – unlimited eye relief, no parallax to worry about, the ability to shoot both-eyes-open to maximize situational awareness, and much faster target acquisition than iron sights or a magnified optic. If you do want some extra reach, the good news is that the PA red dot is compact enough that you can easily fit a magnifier behind it, especially if you're using a cantilever scope mount.

What's in the Box?

When buying this optic brand-new, you can expect to open the box and find the following:

All in all, about what you'd expect at this price point. The only thing you'd need to buy to start shooting right away is a scope mount – Primary Arms recommends their cantilever mount, which offers a lower 1/3rd co-witness and is definitely sturdy enough to do the job and won't wiggle or shift on your picatinny rail, but any industry standard 30mm mount will do.

Primary Arms 30mm red dot also frequently runs deals on their optics that include a mount at a reduced price (or sometimes even no cost at all), so if you can afford to be a little patient, you might score an even better deal. 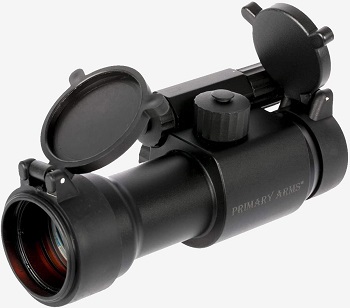 The price of Primary Arms SLx 30mm Red Dot varies, so check the latest price at

The Primary Arms Advanced Red Dot comes equipped with a rotary switch for controlling brightness with 10 different settings, the first 3 of which are night vision compatible—not a feature you typically see on sub-$150 optics. 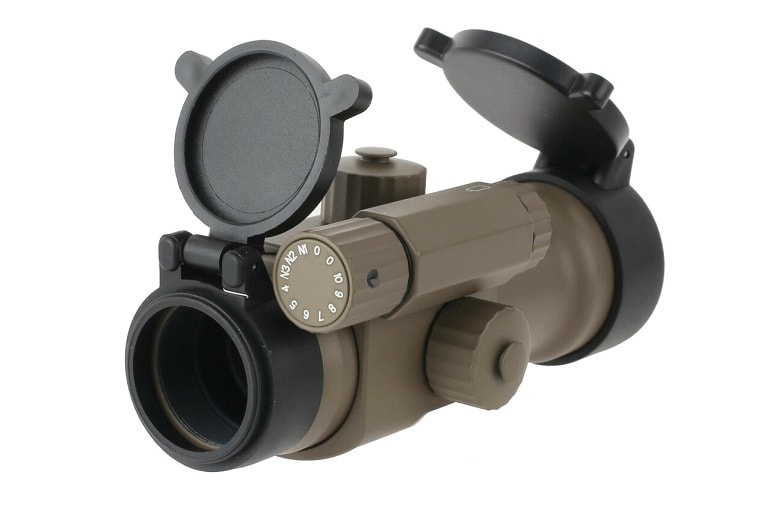 At maximum brightness, it was more than enough to see clearly even in midday Texas sun, and the dot remained crisp without any of the fringing or back-washed red lighting that you tend to see in budget red dots. The medium settings are plenty bright for most uses, and you shouldn't have any issues spotting it even against dense foliage or heavy brush.

A crisp 2-MOA dot reticle is also a very welcome feature on a red dot at this price point—many of its competitors, including some that are double the price, have dots in the 3-5 MOA range. 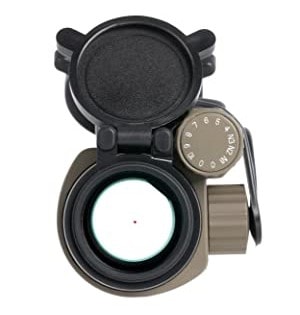 It doesn't make much difference at close range, but once you start getting out past 50 yards or so, having a more precise dot makes a lot of difference, and with a 4 or 5-MOA circle you might find yourself struggling to see your target at all when your dot is placed directly over it.

As I mentioned above, the dot also stays sharp even at high brightness settings, whereas some other inexpensive red dots will start to get fuzzy or even smeared around the edges.

It's a small thing, but Primary Arms' red dots are either a true 1x magnification, or so close that the difference is imperceptible to the naked eye. Some of the less-reputable budget optics manufacturers market their red dots as “true 1x” by rounding down, so you might actually end up with an optic that is as high as 1.4x magnification. 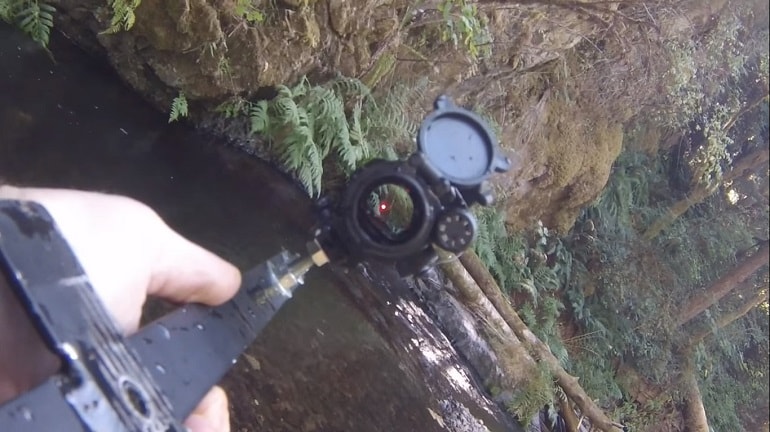 You might be wondering what the fuss is about, and it's true that it's not going to be an issue for most shooters, but at extremely close distances, that extra magnification can impact target acquisition speed and cause your eyes to work a bit harder when shooting both-eyes-open.

That starts to be an issue if you're using the optic for home defense or in a competitive shooting environment where even fractions of a second can make a difference, and besides that, it's nice to know that a manufacturer isn't trying to get one over on you on a technicality.

So how does the Primary Arms Advanced 30mm Red Dot actually hold up in the field? Very well, actually! The first thing I always look for in a budget optic is the quality and clarity of the glass, and I am very impressed with this one. No noticeable distortion, excellent clarity and sharpness, and while you're there's a tiny bit of blue tint to it, there is much less color-shift than you'd expect to see at this price.

Windage and elevation adjustments can be made with a coin, fingernail, or the edge of a spent casing. Click value is ½ MOA, and both windage and elevation have 40 MOA of total travel, which is more than enough for any distance you're going to be shooting this optic at, even with a magnifier. 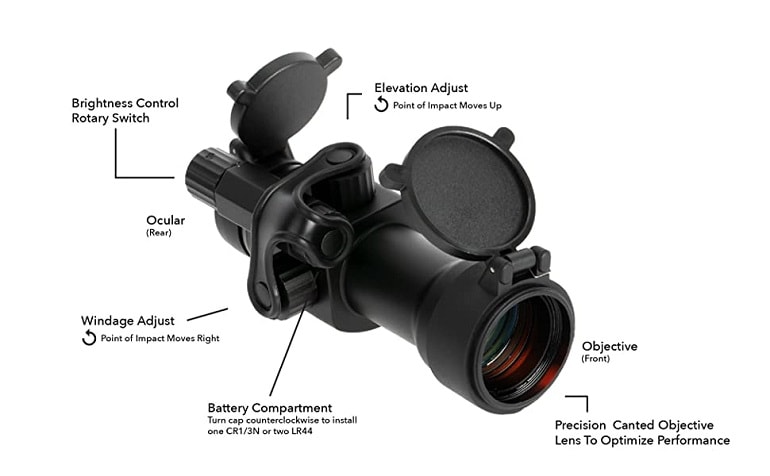 A quick and dirty box test revealed that the tracking is solid, though obviously not as precise as a traditional variable-power riflescope. The objective lens lets in a decent amount of light and comes slightly canted to further reduce glare.

With the Primary Arms high cantilever scope mount, setting up a lower 1/3rd co-witness was simple. A high mount (or regular full size 30mm mount with a sufficient riser) would allow for absolute co-witness, but personally I find that to feel a little crowded on an un-magnified red dot.

The optic feels quite durable, and has a solid heft to it. It's made out of aircraft-grade aluminum and topped with an anodized hardcoat finish, and the internals are shockproof, fog proof, and waterproof (though I wouldn't try submerging it for too long or at a depth greater than a couple feet).

I tend to manhandle my rifles a bit, and I've never had a Primary Arms optic fail on me, but they've also got an excellent lifetime warranty that specifically covers general wear and tear, so I'm not too worried about it ever being an issue.

The price of Primary Arms SLx 30mm Red Dot varies, so check the latest price at

The Primary Arms Advanced 30mm Red Dot draws inevitable comparisons to the Aimpoint PRO, and it's hard to deny that it was meant as a direct budget competitor when you look at them side by side. They share most of the same features and even a very similar design profile, so it's only fair to look at the Aimpoint as an alternative option. 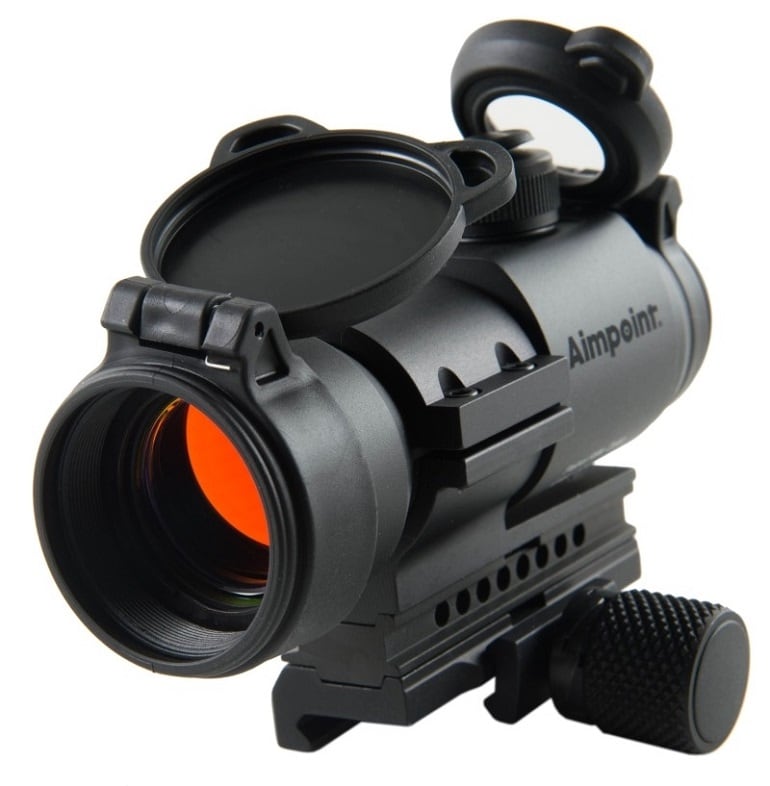 First things first: the Aimpoint PRO retails for almost four times the price of the PA red dot. In terms of optical clarity, I found them pretty evenly matched – I would maybe have to concede that the Aimpoint is a little sharper, but certainly not by much, and I'd have no qualms about putting either one of them on my rifle.

The Aimpoint has one additional level of night vision-compatible brightness, and is slightly brighter on its maximum setting. It also boasts almost double the battery life (not that the Primary Arms' 1400 hours is any slouch, either).

In terms of durability, the Aimpoint PRO is built a little stronger, and has the benefit of being a combat-tested optic tested in the field by both military and law enforcement. Notably, the Aimpoint can handle being submerged in up to 150 feet of water. That's not particularly relevant unless you're a Navy SEAL or plan on SCUBA diving with your rifle for some reason, but it does illustrate what kind of difference that price tag can make.

If you're looking for a patrol optic or a home defense option, it is probably worth spending the extra money. For everyone else, the Primary Arms red dot is more than enough to suit your needs. 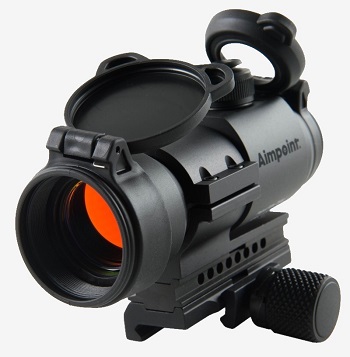 The price of Aimpoint PRO Patrol Rifle Optic varies, so check the latest price at

I can confidently say that you would be hard-pressed to beat this optic for the price—especially if you can grab it while it's on sale on Amazon, OpticsPlanet, or as one of Primary Arms' less frequent bundle deals. Most budget optics have to cut some corners, usually in the form of poor glass quality or weaker materials, but those are surprisingly two of the Primary Arms 30mm Red Dot's strong points.

There are a few torture tests on Youtube from people willing to toss their new optics into gravel pits and sink them in rivers, but suffice to say that this red dot will hold up to any reasonable abuse you'd encounter while hunting or taking part in competition shooting, even if you're pretty rough on your gear. 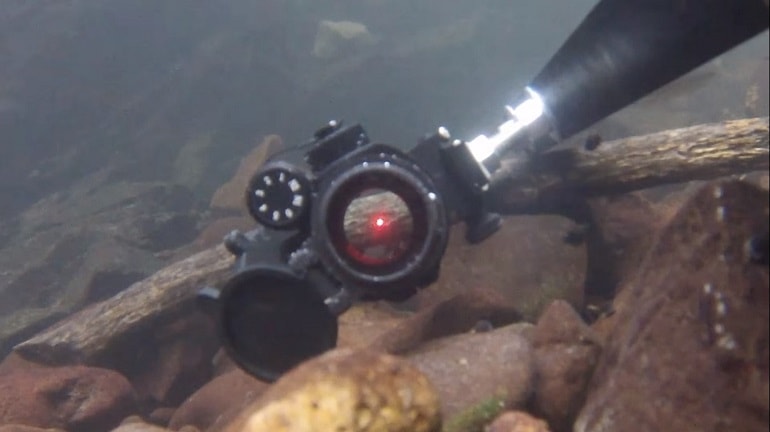 This isn't a long-range optic, and even with a magnifier you are probably going to run up against the limits of the reticle after about 250 yards or so, unlike some of the fancier (and more expensive) ACSS or BDC reticles.

But if you're searching for a close-range optic that keeps it simple in exchange for being able to provide high quality at an extremely affordable price point, I would highly recommend giving the Primary Arms Advanced 30mm Red Dot sight a spot on your wish list.

A good red dot, reflex sight, or holographic sight is a critical piece of gear for any CQB-oriented kit, but not everyone has Trijicon money. For those on a tight budget who still want a high quality optic that won't fail when the going gets tough, Primary Arms won't disappoint.

Have you tried this optic out, or maybe spent some time behind one of the older generation PA red dots? Have a question that didn't get answered in the article? If so, sound off in the comments and let us know what you think! Your feedback helps us ensure that we're bringing you the best, most accurate, and most informative reviews and guides possible. And if you're interested in checking out some more info on red dots, take a look at our recent Best Red Dots guide!

Eric Shattuck is an avid hunter and outdoorsman who has been shooting since the age of 15, when his father gave him his first Henry lever-action .22. Growing up in a family of military veterans and game wardens, firearms have been a part of his life for as long as he can remember, and he loves spending time behind everything from black powder revolvers and old milsurp to the latest pistols, rifles, and shotguns. From varmint hunting on the South Dakota prairies to taking down invasive feral hogs in East Texas, Eric has always been passionate about ethical hunting and conservation. As well, he has recently branched out into local-level 3-gun matches, and hopes to continue honing his skills and getting involved in other types of competitive shooting in the near future.