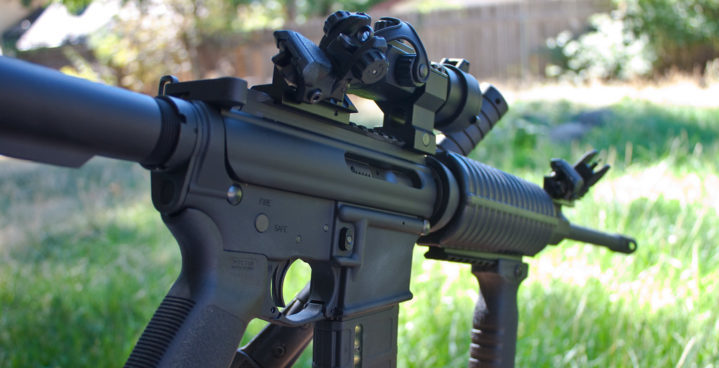 With the recent development of high performance ACOG, red dot, and scope sights, the basic open or iron sight has gone the way of the buffalo in some respects. However, the primary use for this sight today is urban close support operations by police or home defenders, as well as backup sight systems for when the fancy glass sight bites the dust.

Iron sights are applied where and when the AR-15 retains the tower front sight, as in the old standard M-16, which is also equipped with the H bar sight on the receiver.

In the case of my Smith & Wesson M&P-T, the front sight is attached to the forward section of the Weaver rail that also mounts the rear sight. This sight system is secondary to my scope, in case my glass sight system goes down in the field. 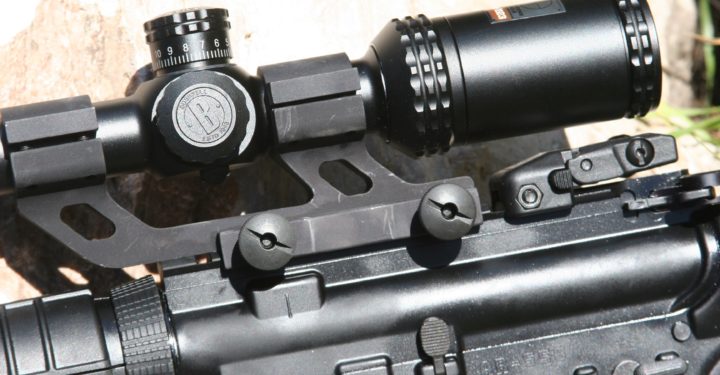 Making use of the iron sight is very basic in terms of function. How to zero iron sights is dead simple as all of these sights, regardless of the basic design, make use of windage and elevation knobs or screws.

Set the rifle on a rest, mark a target at close-range (25 yards), and send a round into the paper for a first round marking adjustment. After the shot turn the adjustment settings several clicks and send another round onto the paper. In just three or four rounds you should have the correct zero, if you have done your homework. 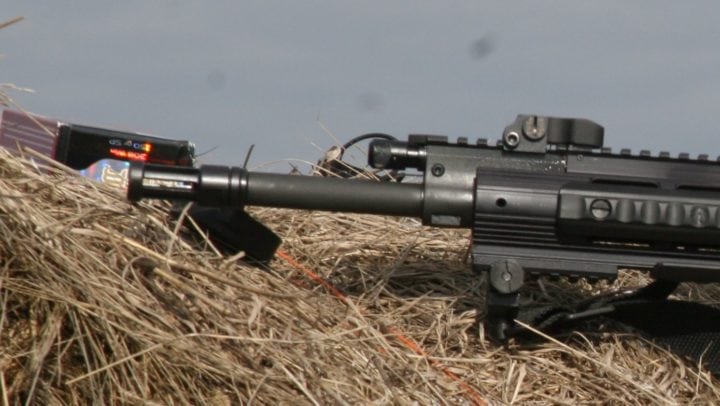 Because iron sights come in several variations, you need to understand that the value of each is important.

First of all, sights that are designed as receiver or peep sights make use of a small hole in the sight housing that the shooter looks through while lining up the front sight with that hole and then on to the target. Receiver sights are the most accurate of the iron sight family.

These sights were used by the old Sharps 45-100 long-range shooters back in the 1870s for buffalo hunting, and are still used in 1000-yard target rifle matches today. All of the US Army in World War Two made use of the Receiver sight as applied to the M1 Grand in 30-06 Springfield. This rifle was deadly on targets out to 1000 yards, when the shooter knew what he was doing.

The second type of sight is known as a partridge or square-notched rear sight followed by a squared-off front sight. This is a fast-handling combat-style sight and, in most cases, built to be field-tough, and it will withstand some massively severe punishment.

One design that is very popular among dedicated AR shooters is the flip-up rear sight. This sight sits low when not required and then with a flip the sight is upright, using spring tension and made ready for use. I run this sight on my AR-15 because it is out of the way, well ahead, and low in terms of any interference with the rear scope bell or power setting ring. 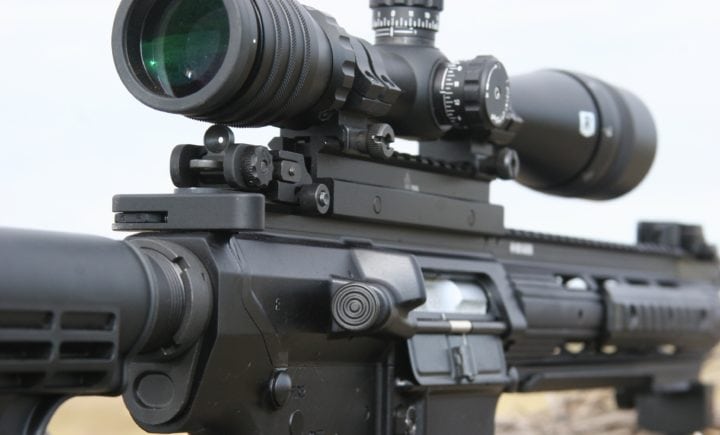 Iron sights can sometimes be ineffective in low-light shooting conditions. Some systems make use of a tritium glowing material that marks the outline of the rear sight and front post. In some cases, shooters paint the front post backside with white paint to allow the shooter to pick up the post and align it with the rear receiver ring or partridge-style sight.

The primary advantage with best ar 15 iron sights is speed as well as the ability to keep check regarding your immediate area of operation. Hunters on running game, or police on room entry, are ahead with these systems.

In some cases, shooting under these conditions can be pure barrel lining, and the sight is almost secondary regarding use. Call it instinctive if you will, and I know I have done this many times over the years. It is so fast a sighting method that you almost don’t remember sighting at all. 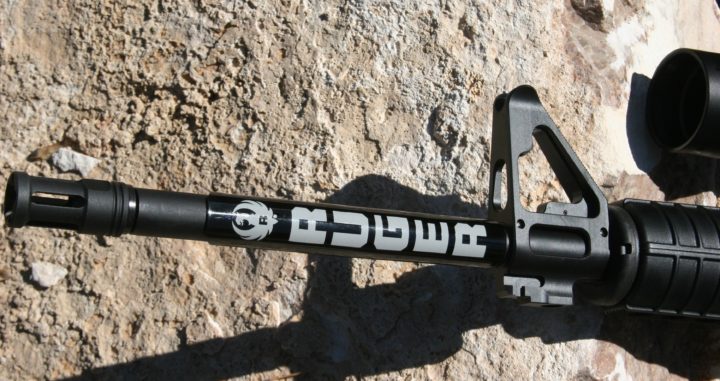 Think of this as a handgun sight versus a rifle sight. Handguns are tough to shoot because of the short sight radius involved with the much shorter barrels.

The iron sight is usually mounted directly to the AR-15’s gas block system. In some cases, these are the tower style front sights, so common during the early years of M-16 military development. Mess with this sight as in some kind of home-made garage custom work and you are going to have problems with that gas block housing as well.

The gas system must be left alone at all cost. Lacking a correct alignment with the barrel, the semi-auto loading system will not function at all. Now you have a single shot rifle.

How effective are iron sights? 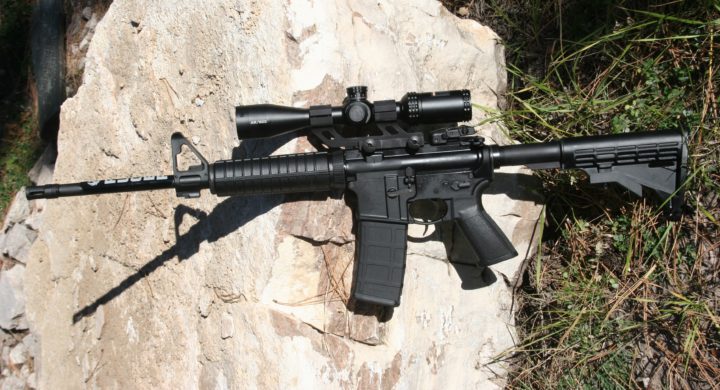 While I have discussed low-light issues and other related elements against the iron sight, the fact remains that when a shooter gets a handle on these sights, a whole lot of good shooting can result from the effort involved in learning how best to utilize them.

Sadly, many young shooters today have never used iron sights and in some cases never will. That's how hard the glass sight system has been driving the market.

I have watched a shooter in a competition using a 22 rimfire rifle with open sights win an event at 200 yards with the basic 40 grain 22 long-range cartridge. I have a buddy who shoots Camp Perry 1000-yard events with the M-1 Grand (receiver sight) and wins against military shooters. (His wife does the spotting for impact marking.)

Over the course of about three decades, I shot nothing but iron sights. My Winchester 25-35 rolled up more deer than some hunters will ever have over the barrel of their deer rifle. I own a World War Two surplus British 303 Enfield that had great iron sights, and again the rifle did the deed in spades when it came time to drop winter meat for the table.

Today I shoot a Winchester 30-30 in the heavy wooded high country of the Black Hills of South Dakota for mule and whitetail deer. The iron sights are primary, with a scope sight mounted to the side as a second sighting system. 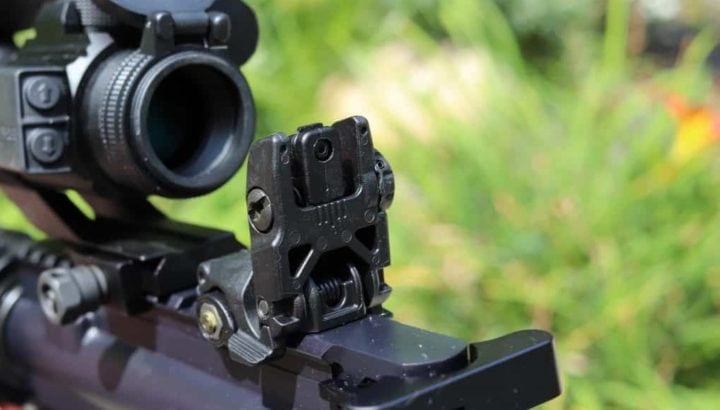 As for the AR-15, due to the fact that the scope system has never failed me, those iron sight are folded down and on standby in the event everything goes to pieces in the primary sighting department. Be advised, however, those AR-15 flip sights are zeroed to the letter at 100 yards if and when needed.