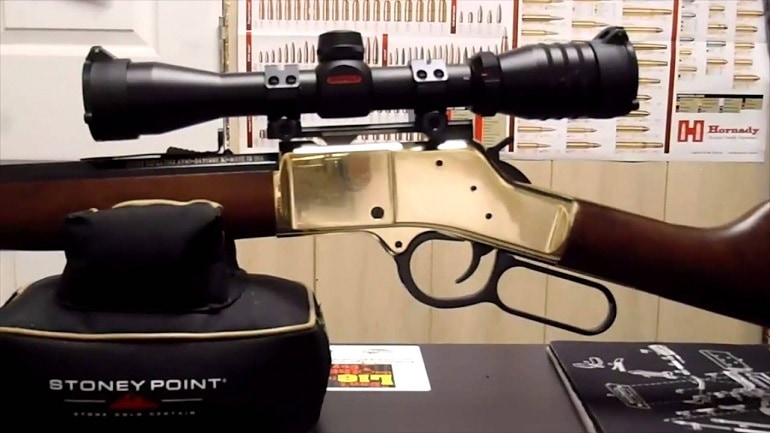 Henry Rifles' Big Boy 44 Mag brings the classic handgun round to a lever gun. You shoot the same round in a rifle and a revolver.

The Henry Big Boy shoots the .44 Special and the 44 Magnum rounds. The .44 Special is a shorter case and pack less of a wallop than the longer-cased version.

Gunner's Den charted the .44 mag shot from a 20-inch barrel rifle and a pistol. Scroll down to the .43 Caliber chart.

While the two charts do not track exactly, you can see the difference in performance with a little math. The rifle chart has the bullet sighted in at 100 yards. At 100 yards, the line of sight bullet drop is around 5 inches. In the handgun, the bullet drop is 8.9 inches.

National Interest makes it even simpler, "When fired from the 20-inch barrel of a lever-action rifle, a 240-grain .44 Magnum bullet can reach velocities of up to 1,760 feet per second, 27.54% faster than when the same bullet is shot from a 6-inch revolver."

The .44 Mag has a reputation as a brush gun. The idea that it won't deflect while shooting through leaves is not borne out by the research. This test even used a .45-75 Government and it showed deflection.

How much deflection is going vary based on what the bullet is trying to punch through and the distance to the target.

Bearing in mind the .44, even from a rifle, is a short distance gun, getting one with a high magnification level is not necessary. Some people do it anyway. I find as I get older, I appreciate higher magnification as it helps me to see the target better.

A large objective lens, also called a bell, is always good. It means better light gathering and gives you a better picture in low light conditions.

Because the barrels are short, the rifles do handle better in thick bushes than something with a long barrel. It swings fast. Having a scope that delivers a fast sight picture is a good idea and another reason for a large bell and at least a 1-inch tube.

Some may wonder about compatibility with a pistol scope, and the answer is that it can be done, but only with some work and a bit of compromise.

The Big Boy is designed to mount an optic on the receiver with a simple weaver base and a set of scope rings. This gives you 3-6 inches of eye relief. Riflescopes are also meant to focus at this distance.

A pistol scope is mounted at arm's length, at least 18 inches. The scope focuses properly at this distance.

To put a pistol scope on a Henry Big Boy, you have to find a way to mount it to the barrel or some extended cantilever arrangement. In other words, it can be done, but if you're looking for the best scope for 44 mag rifles like the Henry, your best bet is to stick to dedicated rifle scopes.

Finally, it's always important to keep durability in mind - full-power .44 magnum loads are no joke, and an inferior scope may not hold up to the recoil for long. It's worth spending a bit extra to get a quality scope that won't fail on you, especially if you plan on hunting with it. Keep in mind that this goes for the scope mount, too. 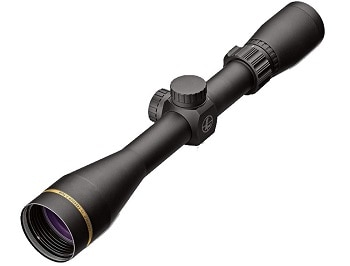 Leupold scopes are built to last. This is the kind of scope you can hand down to your grandchildren with the rifle, and they've got a great warranty policy, too. The VX Freedom is a new line of scopes from the company and it is well suited for the .44 mag rifle.

The magnification range runs from 2-7, which is good for close to mid-range work. It has a duplex reticle.

It has a 33mm front bell, which is in the middle for front lenses on rifle scopes. Since Leupold also brings superior glass and excellent coatings to the table, this 33mm bell will outperform cheap scopes with a larger front, making it a solid pick if you're looking for something that can handle both hunting and target shooting. 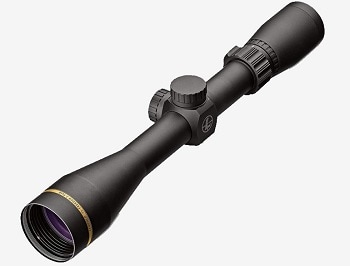 The price of Leupold VX-Freedom varies, so check the latest price at 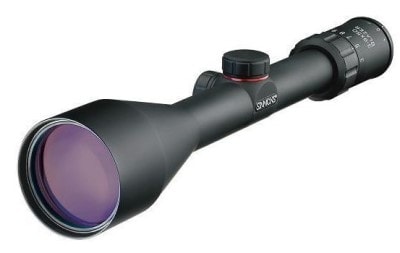 The 8 Point, named for a classic trophy deer's 8 tines, is ideal as an entry-level scope. Simmons is known for producing inexpensive scopes that will do the job. They do not come with a lot of features. I have several and each one works fine.

The HydroShield coating on the lens keeps the water away if you are hunting in the rain.

The beginning magnification setting at 3 is the highest minimal setting you need on a .44 Mag rifle.

The price of Simmons 8 Point 3-9x50mm varies, so check the latest price at 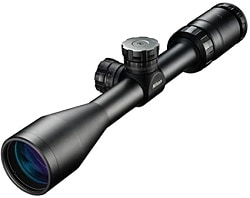 In a lot of respects, the Nikon P Tactical is similar to the Leupold in. They both have a 1 inch tube, both are waterproof and have very high quality glass. Professional photographers rely on that glass quality for their cameras.

At a 3x9 magnification level, you get a slightly tighter view than with the Leupold. The two are also very similar in price. 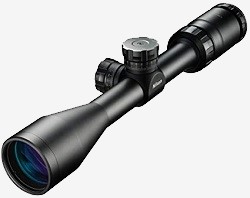 The price of Nikon P-Tactical BDC varies, so check the latest price at

Short-range carbines like the Henry Big Boy .44 Mag are ideal candidates for red dot or reflex sights. Quick target acquisition, easy zeroing, compact size and the ability to co-witness with iron sights in some models makes these scopes a top choice for many .44 carbine shooters.

No matter what the manufacturer says, replace the battery at the beginning of hunting season each year. 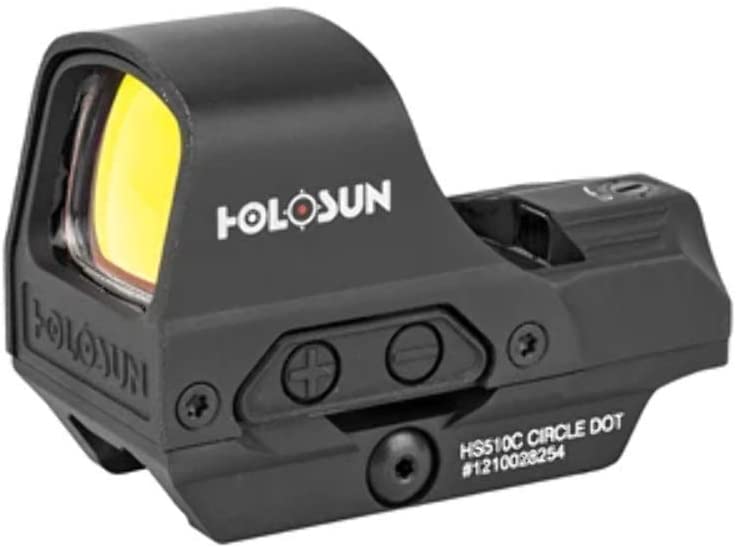 This scope is a top choice among competition shooters these days. It features a 2 MOA red dot, about 2 inches at 100 yards, or a 65 MOA ring. Further, you get the choice of having that dot only, the ring only or both at the same time. One version comes with a green dot instead of red.

Holosun has the shake awake feature. Turn the scope on and after a few minutes it goes into standby mode. When the gun moves, the scope comes back on. This saves battery power. 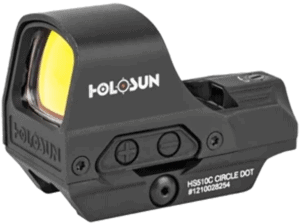 The price of Holosun HS510C 2 varies, so check the latest price at 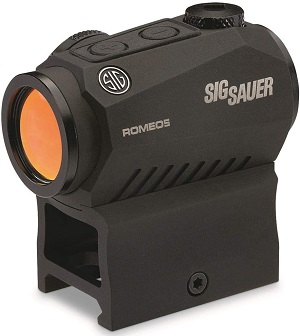 This Sig Sauer red dot scope is made by the same company that produces handguns. This scope comes on an elevated mount so you can co-witness under the scope if need be. This sidesteps the issue of having to work around the iron sights visible through the scopes.

This scope is also motion-activated when turned on. 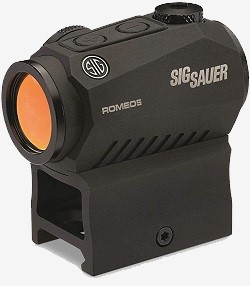 The price of Sig Sauer SOR52001 Romeo5 varies, so check the latest price at

As wild hogs become more and more of a pest, more states are opening night hunting in hopes hunters can control the populations. The Henry Big Boy .44 Mag is a great gun for nighttime feral swine hunting. The bullet's reach is about the same as the distance you can effectively see with a mid-range night hunting scope. That big bullet also anchors a hog. 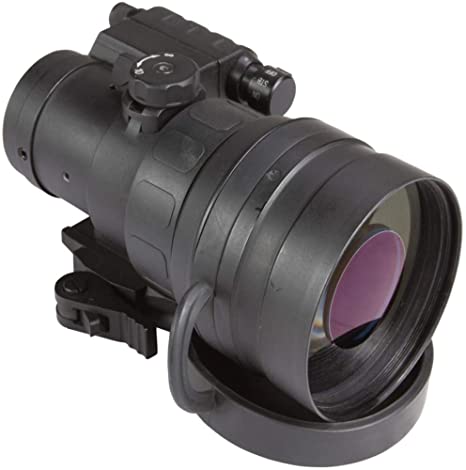 This attaches to the front of your rifle scope and provides the traditional green-screen night vision. A top feature is the ability to use AA or CR123A batteries to run it.

To get more range on cloudy or moonless nights, add the ATN IR850 Pro IR illuminator. The combination will give you the shooting distance you need to put some wild pork chops in the freezer. 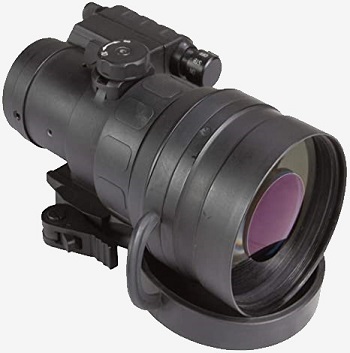 The price of AGM Global Vision Comanche-22 NL3 varies, so check the latest price at 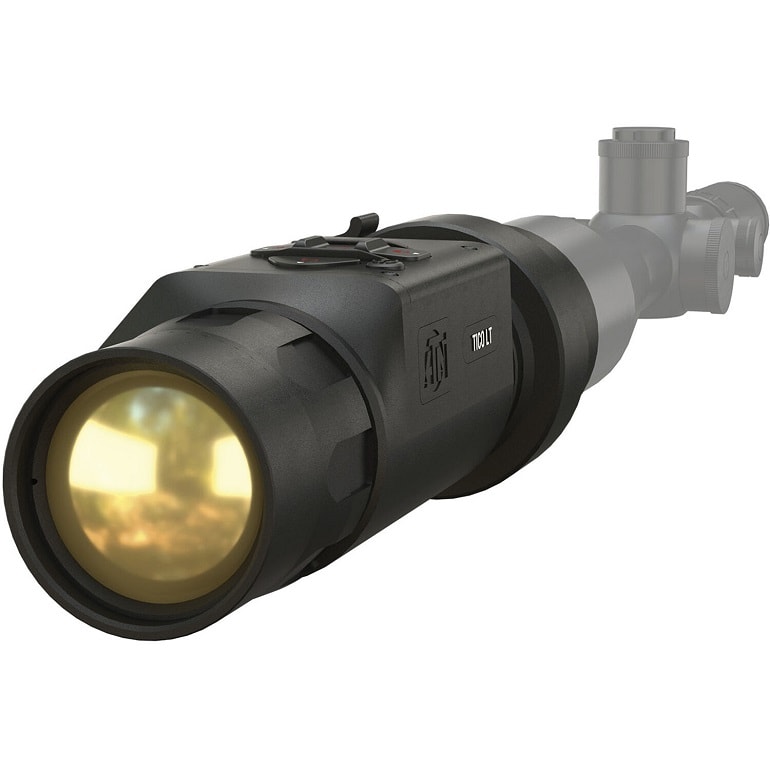 Thermal scopes are more expensive than traditional night vision, but also offer more range and work in complete darkness without an illuminator. The ATN Tico mounts to the front of a traditional rifle scope and turns it into a nighttime hunting beast.

It has an internal battery, chargeable with a USB-C cable. It is waterproof and weighs 1.2 pounds. 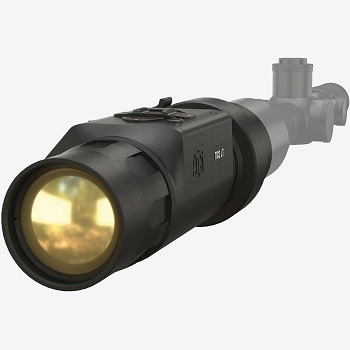 The price of ATN TICO LT 320 50 mm varies, so check the latest price at

Ben Baker is a lifelong hunter and fisherman. His first experience with a gun was, literally, carrying a cork popgun with his grandfather on a dove hunt. The young Mr. Baker was still in diapers at that time. He has hunted across the United States and Canada with everything from .22 shorts to a .50 BMG. His favorite long gun is the Mosin Nagant in 7.62x54r. His preferred handgun is a Colt Government 1911 in .45 ACP. He may be the only person on the planet to have hunted, and killed, a bobwhite quail with the .45 ACP. His favorite shotgun is the Mossberg 500. For nearly 30 years, Ben has professionally reviewed guns and gun accessories. His writing on many topics has appeared in publications and websites across the planet.