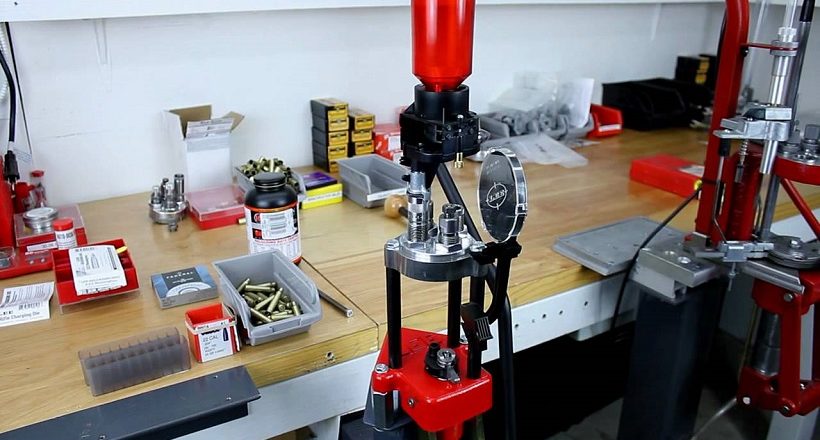 When you start to look for the best progressive reloading press, there are some basic things you need to know. Perhaps you are wondering which type reloading press is best for you.

The reloading press most shooters turn to is a single stage system. They select this type whether it is a centerfire rifle/handgun press or a shotshell reloading system.

To load a cartridge or shotshell into a single stage press, the operator moves the case or hull into each station on the turret or H bar system on the reloader. 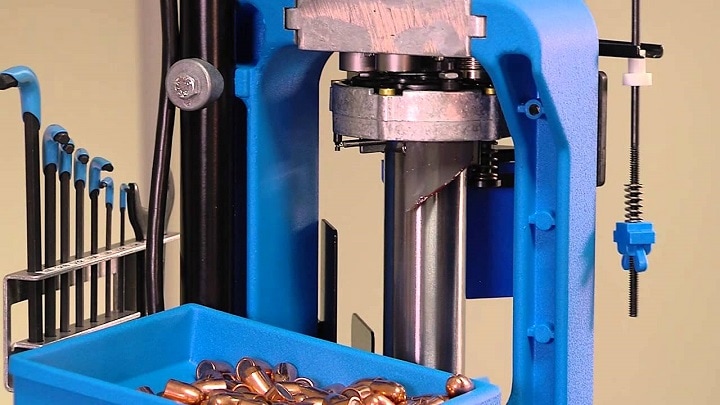 However, with the progressive press system, the operator sets the hull or case into the first loading station (de-priming and resizing die). Then, with just a drop of a lever, the remaining functions are completed.

The case moves on to the next reloading station automatically. After the lever has been used to produce a finished shotshell, the remaining functions will produce a round of ammunition with each lever pull.

The following reviews of the best reloading presses will help you make your selection. 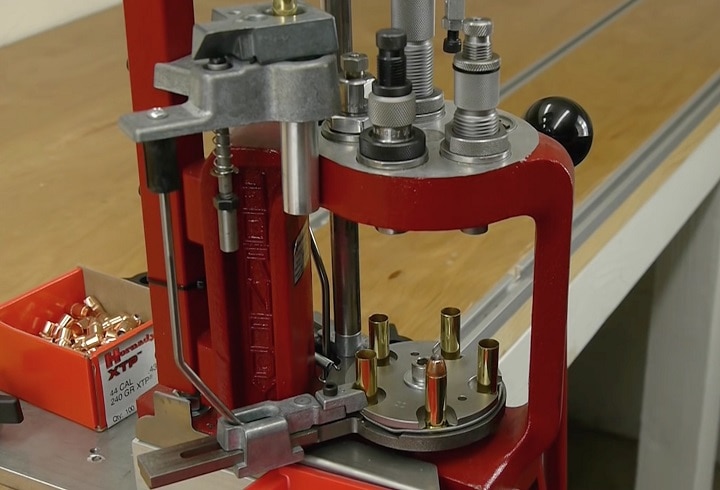 Progressive reloading machines load ammunition quickly. For clay target shooting or three gun events that use metallic cartridges, the progressive reloader is best if quantity is the desired outcome.

Hornady offers the Lock N Load for reloading metallic cartridges. The press uses a turret system that brings the case to each station. Then, the reloader does its job as the operator moves that single lever.

This auto progressive reloading press makes switching dies an easy task. Go from 30-06 to 270 in minutes, almost without stopping the system. 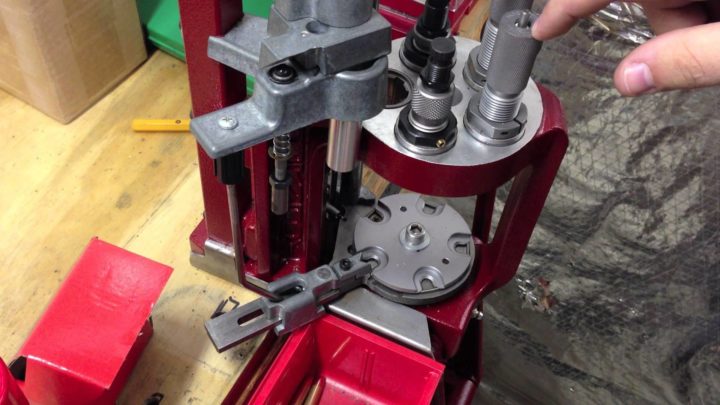 The press uses five stations with different bushing systems. Changing from one cartridge to another takes less than five minutes.

The EZJECT system designed by Hornady makes a smooth ejection for dropping a completed round off the final station of the turret system. Hornady offers custom grade dies with this press.

The main frame of this turret press is very well built and will last the shooter for many years.

Hornady's Power-Pac linkage design makes it easier to run through the various functions such as sizing, priming, and crimping the bullet. The process is a snap and requires no extra effort from the operator.

The press features a built-in priming system and a case activated powder-drop system. 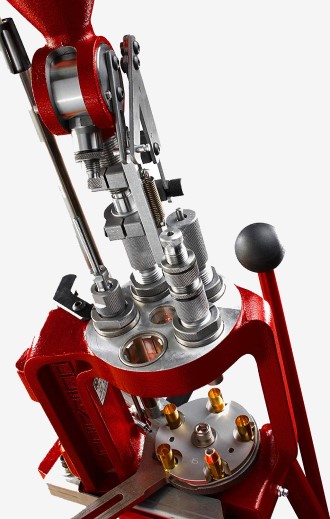 The price of Hornady Lock N Load  varies, so check the latest price at Amazon. 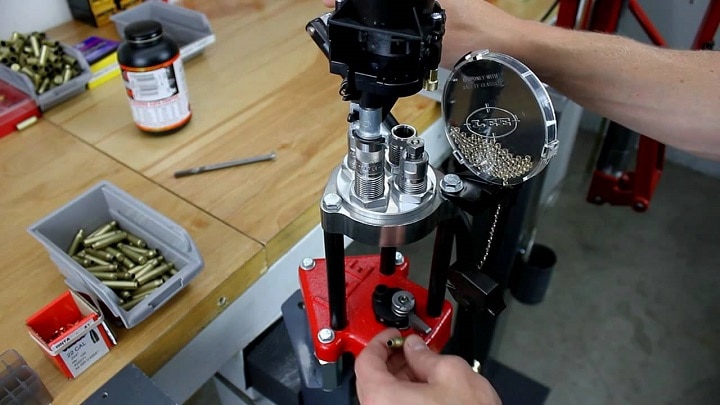 Dropping down in price a bit and featuring an aluminum housing, the Lee Load Master is a good solid press. However, it has a more limited use than what is expected of a cast iron turret press.

Lee builds good products. I have two Lee precision presses set up in my loading room. These presses have served me well as H bar press units for shotshell reloading.

The Lee Load Master Progressive can run as an automatic machine or a single stage loader.

Need to drop in a few grains of extra powder for experimental or prototype loading? No problem at all with this turret setup. 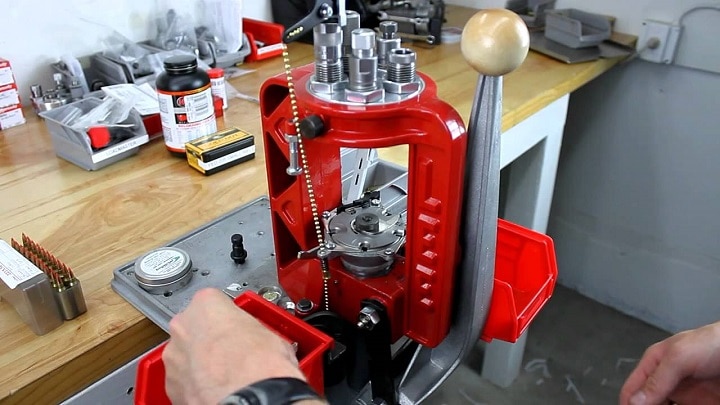 This press will load from .223 Rem through .454 Casull with a pile of cartridges in between. 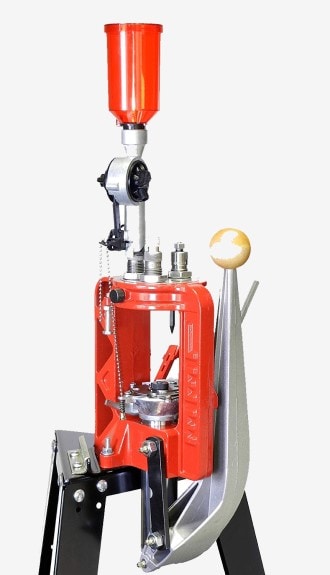 The price of Lee LoadMaster varies, so check the latest price at Amazon. 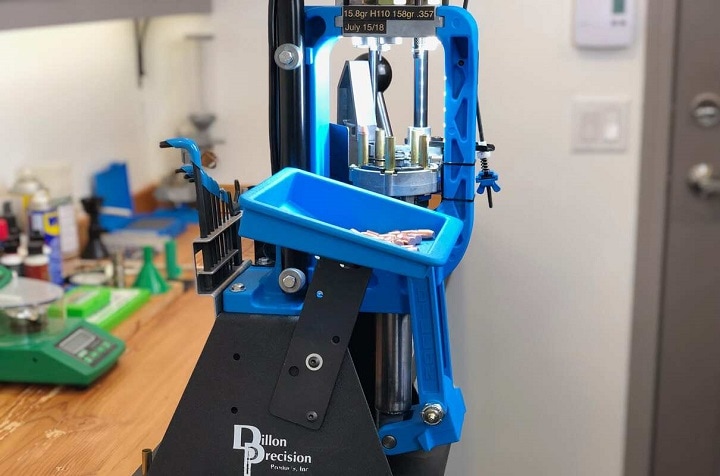 The Dillon XL650 Progressive comes with large and small primer pickup tubes. The press features a low primer alarm, a loaded cartridge bin, one tool head, one powder die, an installed caliber conversion kit, and a set of Allen wrenches.

You will need to purchase die sets, a powder scale, a dial caliper, a primer flip tray, and a case of lube for bottleneck cartridges. 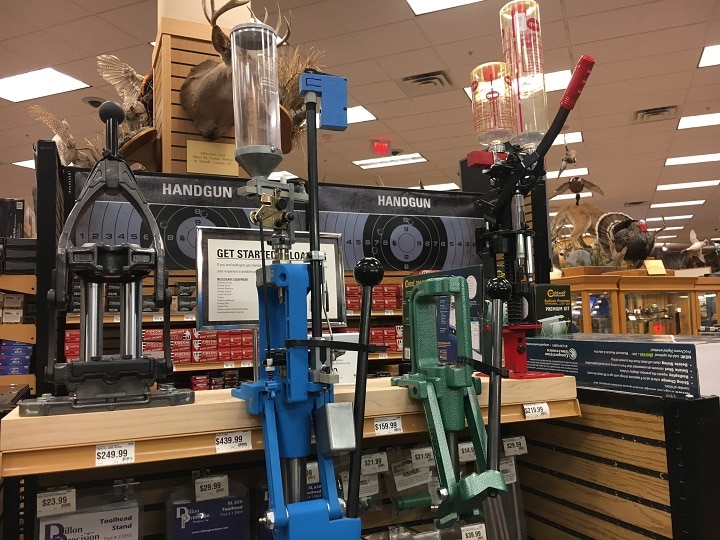 This press is compatible with the RF-100 Electric Primer Filler. This accessory is recommended if the operator loads more than 500 rounds in a single run.

This press is best used with groups, shooting club events, or advanced three gun competitions that require a high volume of ammunition. 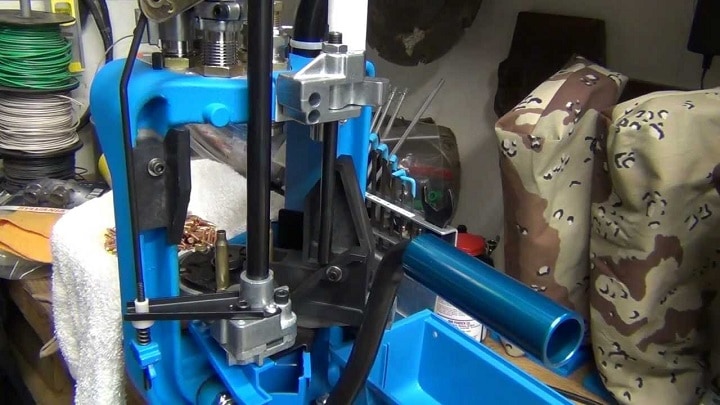 If you are reloading small quantities of ammunition, this press exceeds your general reloading needs. This press might even be considered "light commercial." In fact I know of at last one small company that uses one of these for custom ammunition orders.

This press will handle anything from 17 Hornet through 458 Winchester for rifles and 32 APC through 500 S&W for handguns. 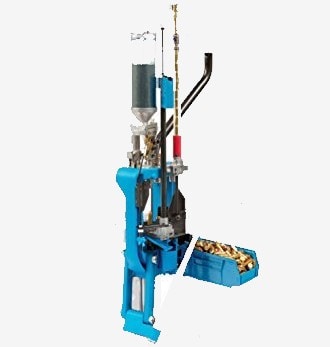 The price of Dillon Precision XL650 Progressive  varies, so check the latest price at Amazon. 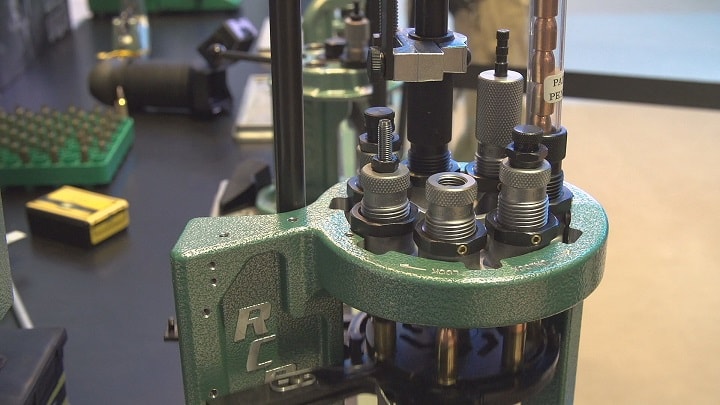 In my shop, RCBS has always been a standard. However, I don't run progressive machines because I need accuracy more than volume. The RCBS line performs well for my needs as an outdoor/gun writer.

The load rate on this press is 600 rounds per hour (pistol). The press features a die-cast aluminum frame. Zerk fittings provide lubrication. 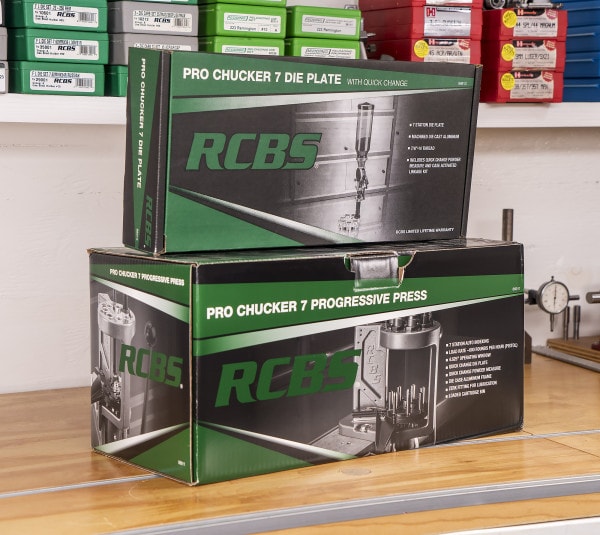 This press is the first automatic indexing system in a seven-station press available today. The press can be set up to load a series of cartridges in automatic mode.

Other stations on this flexible press can be hand fed with brass and other components for custom touches with special dies. 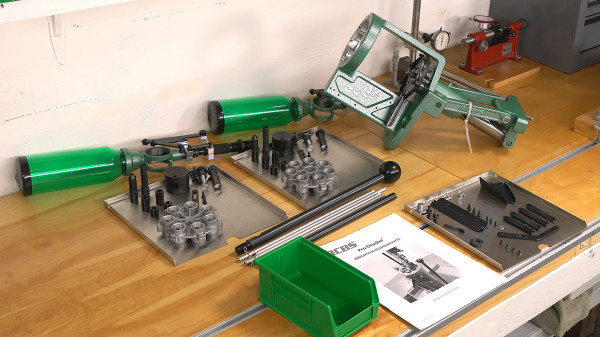 The standard primer tubes are used with the newly designed safety shield. The press allows for a large capacity of powder so that the operator can recharge the system without stopping production.

Also, a quick dump drain tube is installed to eliminate the need to remove the power hopper when changing out powders. 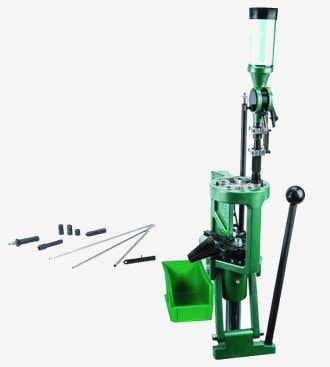 The price of RCBS Progressive Press Chucker 7  varies, so check the latest price at Amazon.

MEC or Mayville Engineering Company has many years of experience with making ammunition. 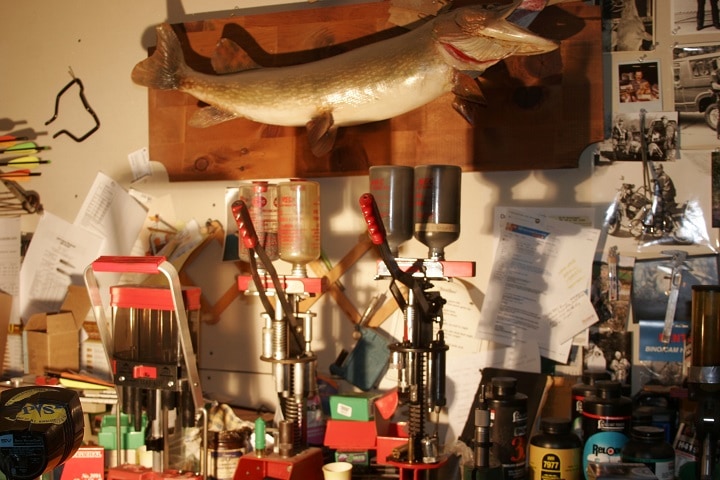 My twin MEC systems in service Up to seven project are going on at the same time in this loading room. Four presses full time re R&D.

I installed the first of several high-quality MEC reloading press systems in my shop many years ago.

I cannot recall a time that I replaced a single moving part, die, or even a simple retainer spring in that first MEC 250 reloader. These heavy-duty systems are built to last.

Since my review work does not require multiple loads, the simple turret hand press built by these folks meets my needs.

Some of the advanced nontoxic loads you see today got their start on a MEC press. 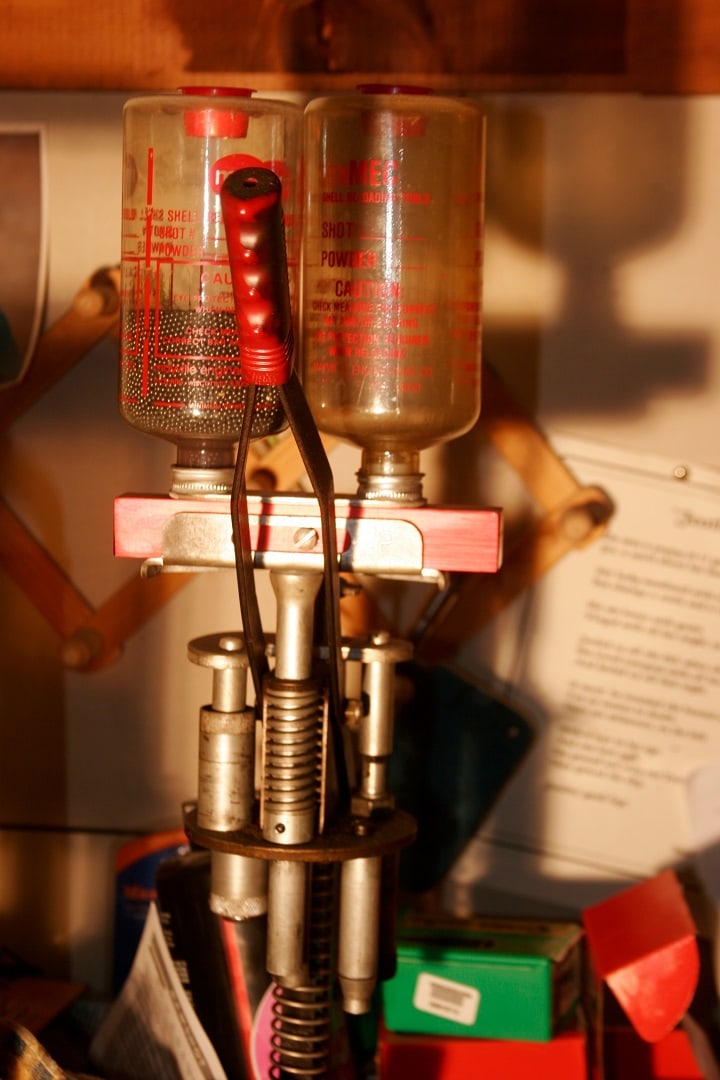 Walk into the Federal Cartridge ballistics labs. You will see single stage presses lined up for engineering to use in building prototypes. Which company's press is present? MEC.

This press offers ten different operations on six basic stations around the turret system. One pull of the reloading press handle produces a finished shotshell round of ammunition.

This system is auto indexing. The MEC Auto-Mate provides a way to operate the press by just pushing two buttons. The series 9000GN does not have this feature. 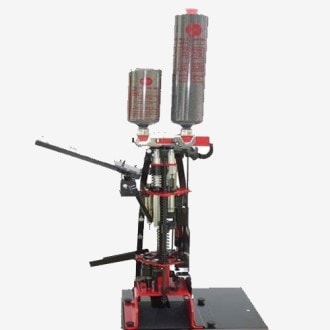 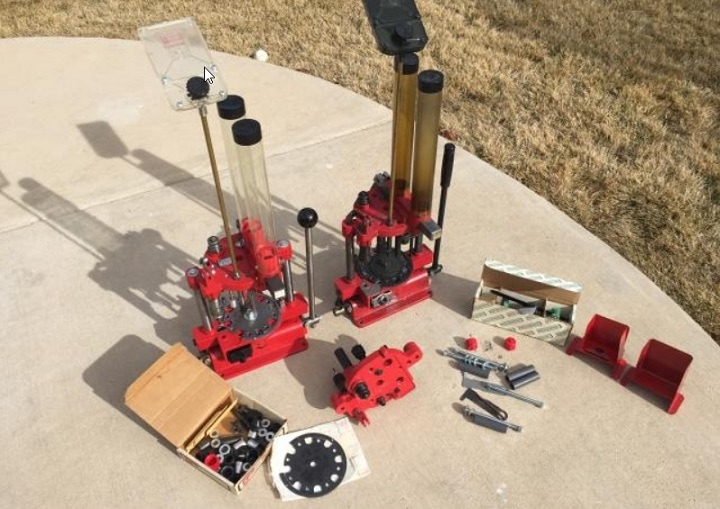 This press resizes, uses an auto primer feed, and includes a swing out wad guide and a three-stage taper-loc crimping system. 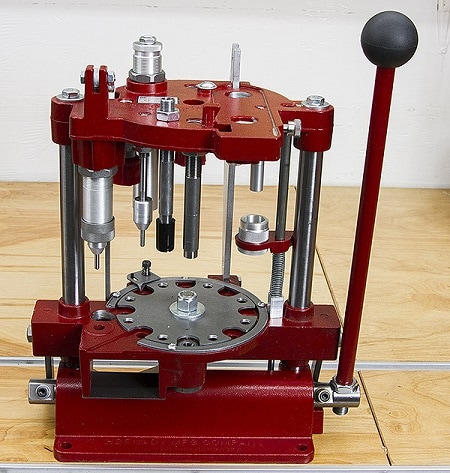 The press features an automatic advance system and automatic ejection of the completed round.

This is a 2 3/4” shotshell reloading system designed for clay target load manufacturing rather than for heavy waterfowl or other uses that require 3” through 3 1/2” loads.

The load speed for this press is 250 rounds per hour on an average. 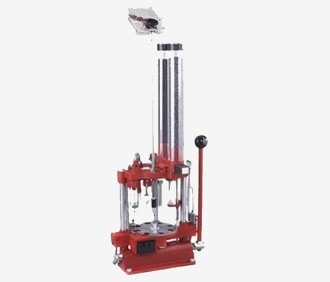 The price of Hornady Progressive Shotshell press 12 gauge  varies, so check the latest price at Amazon.