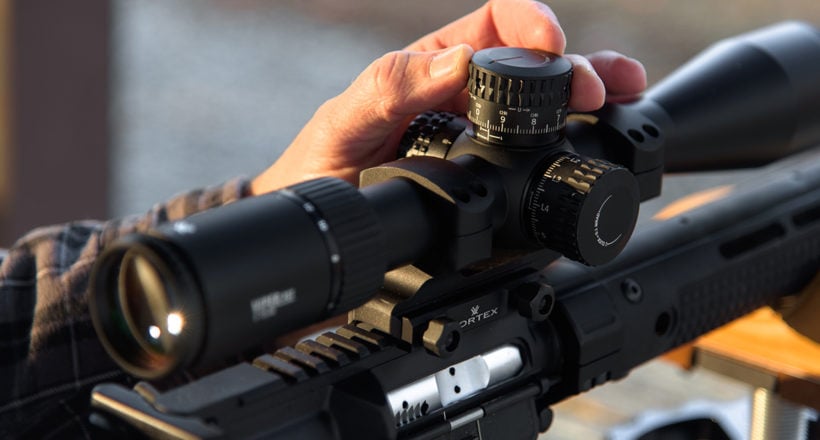 Fixed power scopes are often lighter and more compact than standard scopes. They are also less complicated. This makes them more reliable and more robust. Best of all, they are also more affordable than similar optical choices.

If you want to get going on the fixed power route, we offer more than a few suggestions for you. Here are some of our favorite fixed power optics. 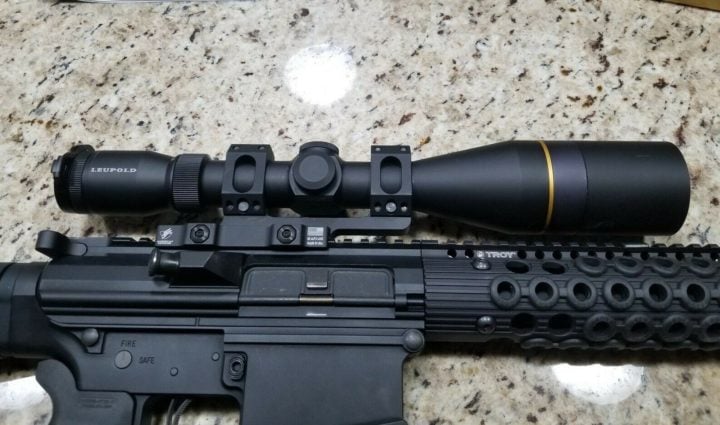 The fixed power design allows for a smaller size as well as a durable design. The Leupold FX-II weighs only 11.4 ounces and is only 10 inches long. Yet it offers you a crystal clear six power magnification.

The eyepiece on the FX-II includes a longer than average eye relief and gives you 4.3 inches of eye relief. This leaves enough room for you to make up for harsh recoiling cartridges and allows you to aim upwards to scan ridges or hills. 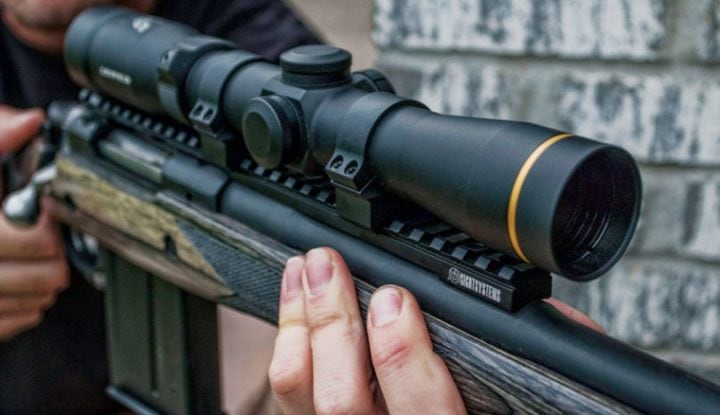 The FX-II is built to last and is 100% waterproof, shockproof, and fog proof. This little compact riflescope is perfect for hunting and is made by Leupold, a big name in the hunting industry.

Deer move at night and in the early morning. Those times of day can have a lower light. This Twilight Max Light Management system proves to be invaluable for taking down your deer of choice.

The FX-II is an awesome optic that takes all the old school features of fixed power scopes and combines them with the latest techniques. This combination gives us an outstanding rifle scope at a rather affordable price tag on Amazon.

The price of Leupold FX-II Fixed Power Riflescope varies, so check the latest price at Amazon. 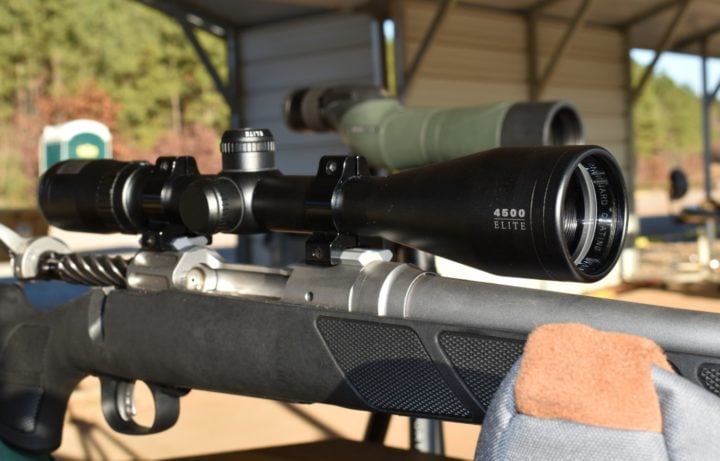 If you are looking for a longer-range option, the Bushnell Tac optical Tactical riflescope gives you a fixed 10X scope with a 40mm objective lens. Magnification of 10X is about as high as you can get with fixed power scopes. You can go a little higher, but not much.

This Bushnell fixed power riflescope is designed for tactical applications. Up until the early War on Terror, the Marines still used fixed power 10X optics for their sniper rifles.

There are a lot of considerations when you start talking tactical scopes. One of those considerations is durability. Others include size and weight. Fixed power scopes have fewer moving parts. This results in a more durable design with fewer things to go wrong. 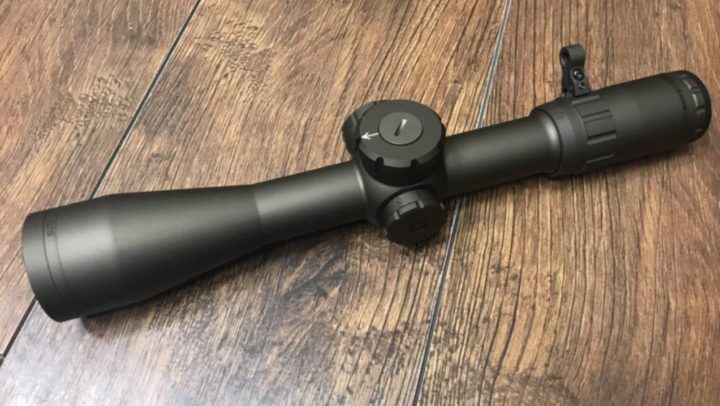 For the same reasons, fixed power scopes are tougher. They tend to be lighter and smaller. The Bushnell Tac Optic weighs only 15 ounces and is only 11.8 inches long.

The Bushnell Tac optic runs a Mil-Dot reticle. This reticle is an awesome means to compensate for both elevation and windage. The Mil-Dots on the reticle are very accurate and quite precise. 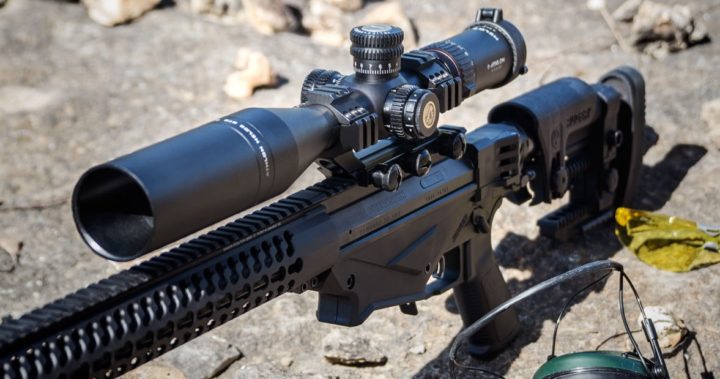 The Tac Optic is an awesome choice for a retro rifle or an affordable tactical riflescope. 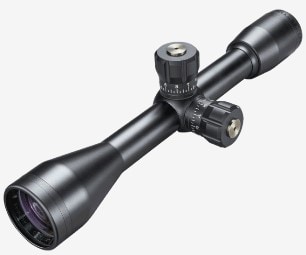 The price of Bushnell Tac Optic varies, so check the latest price at Amazon. 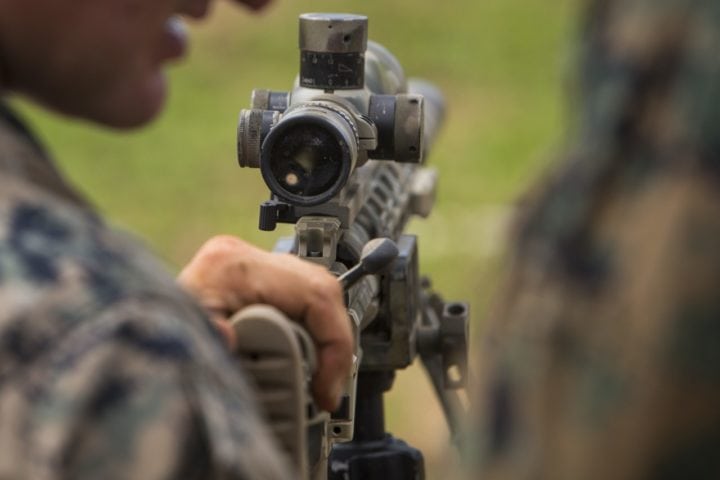 The Weaver Classic K scopes have classic in their name for a reason. Fixed power scopes are old school, especially in a world that likes to stick to variable optics and versatility. However, there is a big reason fixed power optics have hung around for so long.

The Weaver Classic K scopes are lightweight and short. The 4X38 variant of the Classic K weighs only 9.9 ounces and is 11.42 inches long. The 4x38 models offer almost 3.5 inches of eye relief to give you plenty of room for your rifle's recoil and to allow for scanning hills and mountains. 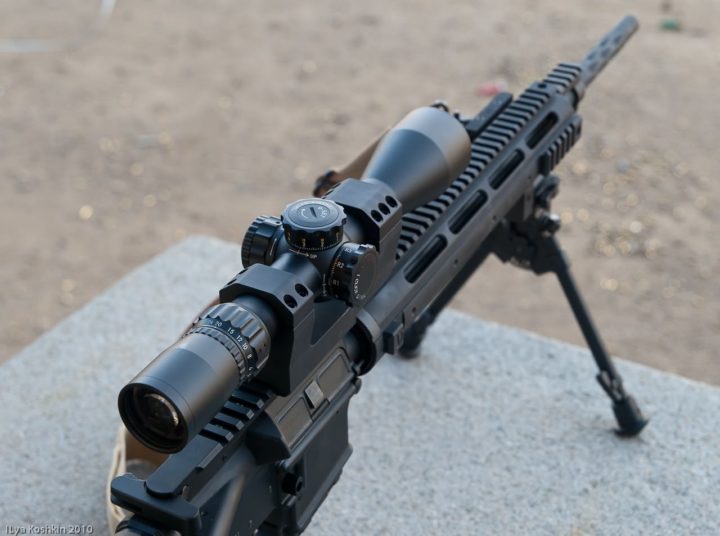 The Weaver Classic K series of optics is light and small, but also tough as hell. Weaver Optics tests these scopes extensively. They put them through the wringer. The K-Series scopes are tested to hold zero for over 10,000 rounds of 375 H&H Magnum rounds.

That specific round is a favorite for African big-game hunters and is known for its knockdown power. It's not a pussy cat. If the Weaver K series can absorb that ammunition, it can take whatever you toss at it. 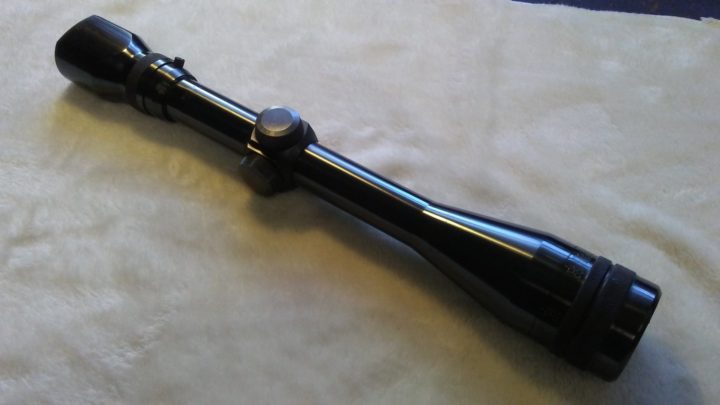 The rich picture makes it easy to scan and pick up targets throughout the living world and ensures you can see just about everything as long as you have a little sunlight.

The price of Weaver Classic K Scopes varies, so check the latest price at Amazon. 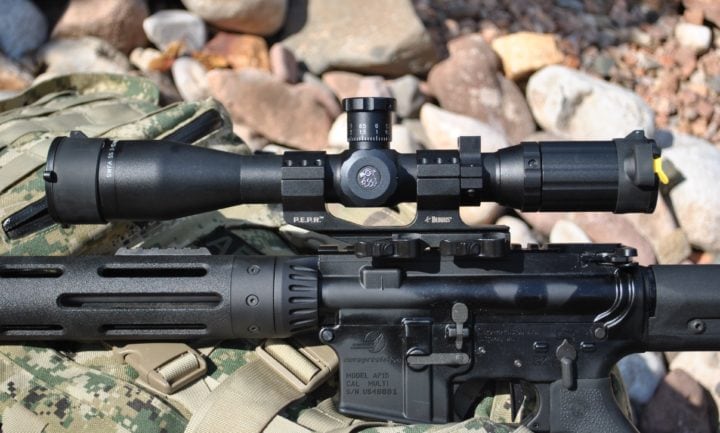 If you want a scope that performs at long ranges without spending more than $500, then the SWFA SS 10x42 is for you. The SWFA SS is a superb scope with a legendary reputation.

This optic has been around forever and is mostly known as the Super Sniper, I mean that is what the SS stands for. The SWFA SS comes in a variety of reticle options, but I think the Mil Quad reticle is likely the best for long-range performance and tactical shooting.

This reticle offers fine lines and markings for range and wind compensation. Every other hashmark is a see-through diamond that allows shooters to compensate as well as see their target effectively. 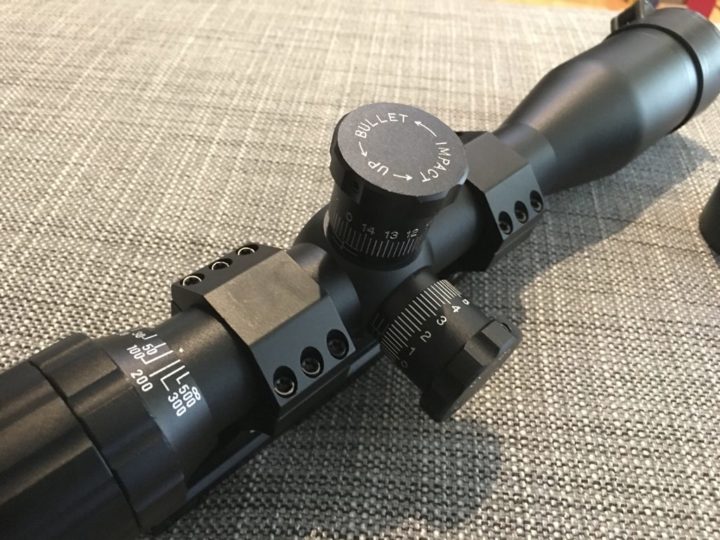 The SWFA SS 10x42 is a simple, but powerful optic. It's built to last. It is rugged and strong. It would be in the right place at a bench rest competition or on the battlefield.

The SWFA SS 10X42 has a rear focus ring and precise fingertip adjustable turrets. These tall tower-like turrets are easy to reach. The shooter doesn't have to break their sight picture. The eye relief is a nice 2.9 inches.

The SWFA SS 10x42 is rated for up to a 50-caliber sniper rifle. This powerful optic is an absolute beast and gives a lot of go for a relatively small sum of money. Don't be fooled. The SWFA SS might be an old school scope, but it keeps up just fine with new school competition. 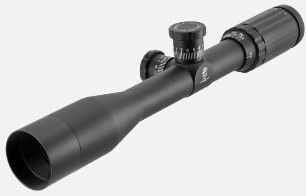 The price of SWFA SS varies, so check the latest price at Amazon. 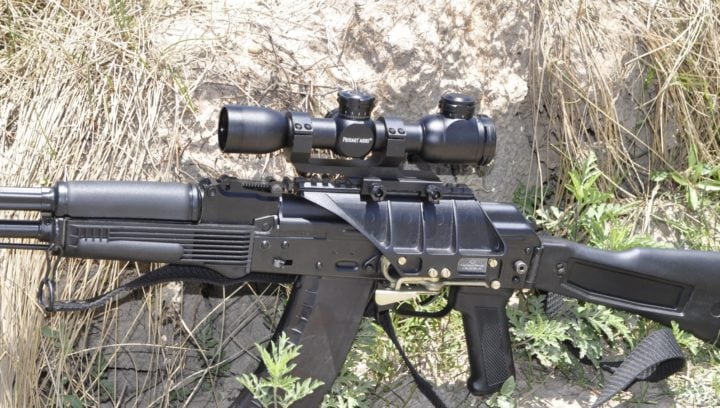 If you are looking for the best bang for your buck, you'll be hard-pressed to beat the primary Arms Classic optic series. The Primary Arms classic series is specifically designed for the money-saving 22 LR round. It uses the famed ACSS reticle, but this reticle is tuned for the 22 LR round.

The 6X optic is perfectly suited for the 22 LR round. You wouldn't need more magnification for that.

The Primary Arms 6X scope's ACSS reticle is not only tuned for the 22 LR round, but also for pest control as well. The built-in rangefinder is perfect for small game as well as small bottles and typical 22 LR targets. 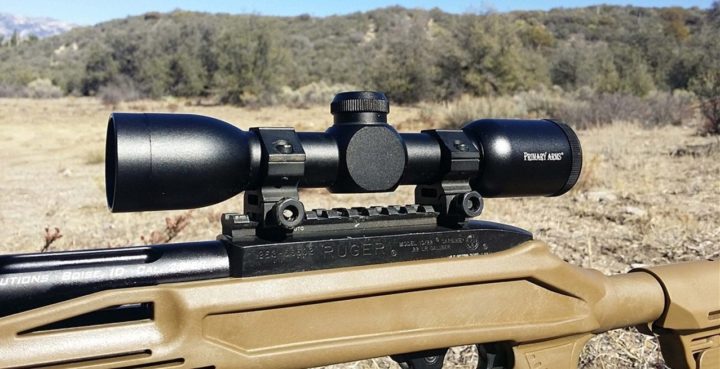 The high-quality Primary Arms 6X optic is guaranteed to last for years on your typical 22 LR rifle. It is a high-quality rifle scope that gives you a crystal-clear picture at 200-yard ranges. The Classic series is a well-built hunting scope and perfect for short-range hunting or plinking. 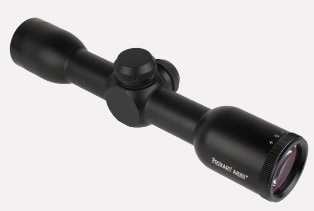 The price of Primary Arms 6X Classic Series varies, so check the latest price at Amazon. 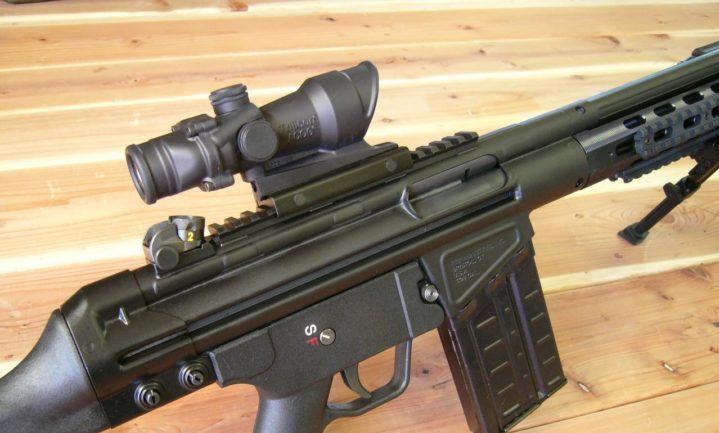 The standard ACOG is mostly known as a compact 4x optic designed for semi-automatic rifles. Trijicon also produced a 6x48 ACOG that's quite a bit bigger than the old school ACOG. However, it's 50% more powerful and designed for longer range rifles.

This would be an awesome optic on a semi-automatic 308 or full-powered rifle in general. It's still designed to be a combat optic. The ACOG 6x uses a bullet drop compensator to compensate for ballistic drop out to 1,200 meters.

The Trijicon ACOG 6X optic uses an illuminated reticle but is battery-free. It's literally powered by the flipping sun. The ACOG uses a strip of tritium and fiber optics that absorbs light from the sun and turns that into the power needed to illuminate the reticle. 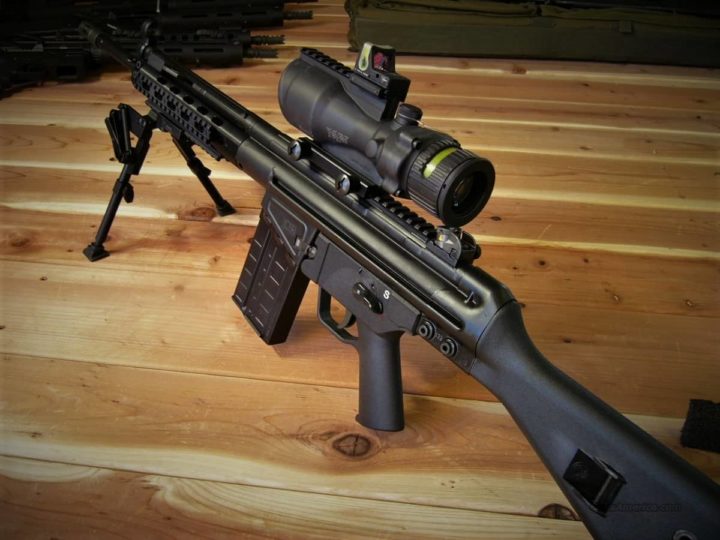 You control the brightness by spinning a small dial near the rear which covers the sensor to reduce light intake.

Like any Trijicon product, the ACOG 6x is built to be bomb proof. It's submersible and waterproof up to 328 feet and insanely shockproof. The ACOG 6X provides brilliant image clarity and an easy to use reticle system.

While it's built for moderate to long-range shooting, the ACOG can use the Bidon aiming concept to track targets as they move and the occluded shooting method for shooting in close quarters. 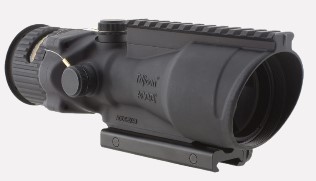 The price of Trijicon ACOG varies, so check the latest price at Amazon. 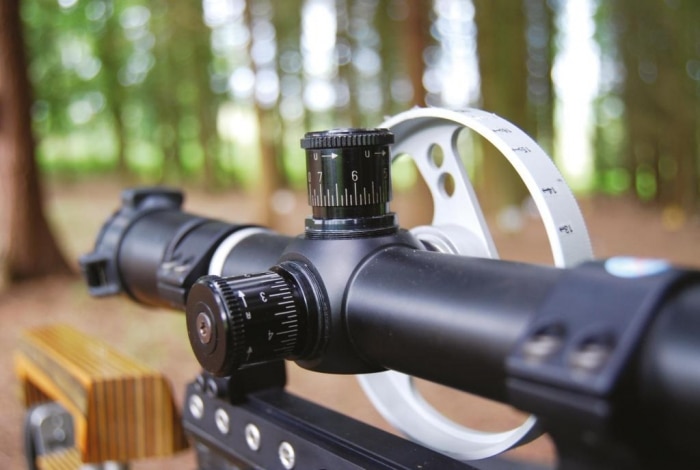 Now, this is a monster of a scope. This is the biggest fixed power scope I've ever seen. This high-quality scope has one viable role for shooting--competition bench rest shooting. These known distances competitions are the only thing a scope like this could be used for.

It's immensely powerful. That power makes it well suited for long-range shooting or shooting very small targets at moderate distances. If you wanted a variable scope with this level of power and quality, you're likely to spend double or maybe even triple the price. 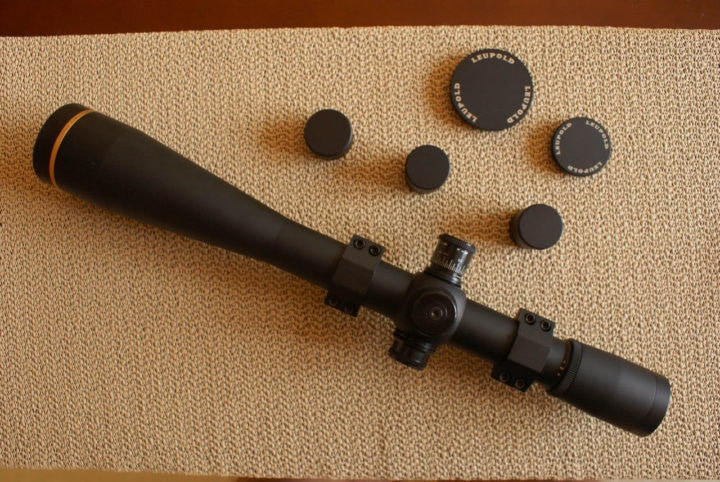 The fact that it's a fixed power optic allows you to get an immensely powerful, high-quality optic for a fraction of the standard price. The Leupold Competition Series 45x45 is a 45-power scope with a 45 mm objective lens.

This big boy offers generous eye relief to accommodate for the heavy recoil of powerful long-range calibers. This is a big scope constructed with heavy-duty 6061 T6 Aircraft grade aluminum construction to ensure you feel its weight. 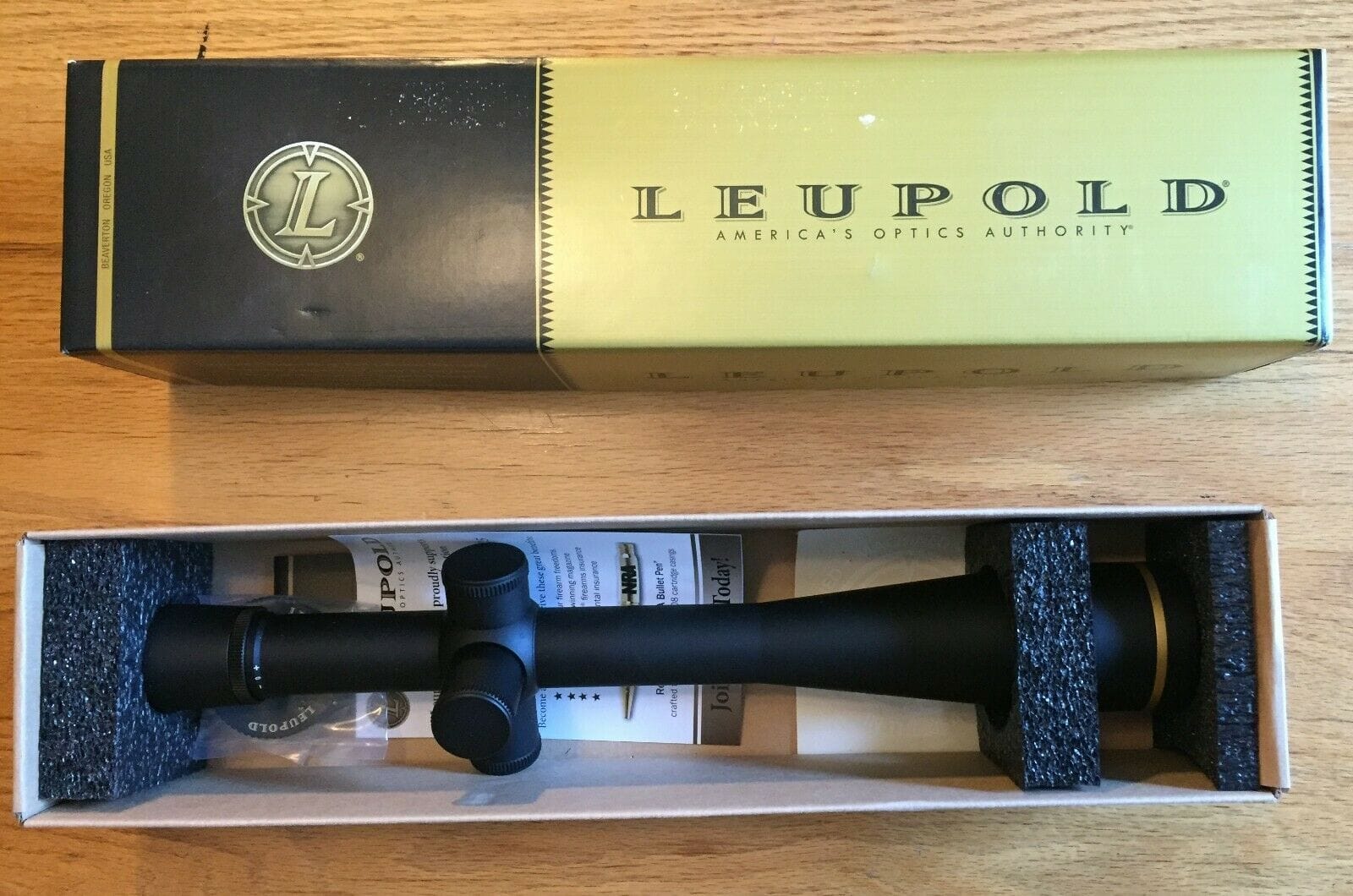 In long-range shooting competitions, this weight isn't an issue since a bipod or bag is likely holding the rifle up.

The Leupold 45X45 provides brilliant clarity to its user. This is fitting with Leupold's reputation. The Competition Series scopes all feature Multi-Coat 4. This Multicoat 4 delivers extreme clarity from edge to edge of the visual field.

You'll get brilliant colors, low glare, and a bright sight picture in low light conditions. It's an awesome optic for a very specific purpose.

The price of Leupold Competition Series varies, so check the latest price at Amazon.

The Burris Scout scope is a fixed power long eye relief sight. Long eye relief means it's pushed far forward of the shooter. These optics are commonly used on handguns and work well for handguns and rifles without traditional options for mounting a scope.

Rifles such as the Mosin Nagant, for example, are difficult to scope. The Burris Scout Scope is perfect for either role.

The Burris Scout Scope is a fixed 2.75 power scope that offers a short level of magnification in a very compact and lightweight optic. This scope helps you place precise shots out to 300 yards with a rifle and out to 150 with a handgun.

The Burris Scout Scope offers a clear image that allows you to easily track your target as well as quickly find your target. The Scout Scope uses fully-multi coated lenses for high amounts of light transmission for low light shooting.

The Burris Scout Scope weighs only 7 ounces. Even on a handgun, it won't add significant weight. This is especially true since these scopes are most commonly on magnum powered revolvers.

The Burris Scout Scope is the perfect fixed power scope if you are looking to equip a non-standard rifle or handgun with a magnified optic. It's a premium built scope at a budget price. 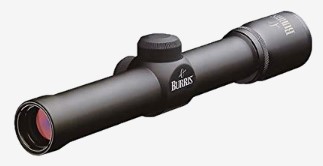 The price of Burris Scout Scope varies, so check the latest price at Amazon.

Fixed Power scopes are awesome optics. As long as you understand the loss of variable power and have a purpose, a fixed power scope can usually fill it. The best-fixed power scopes will be lightweight, compact, clear, and often quite affordable compared to their variable counterparts. 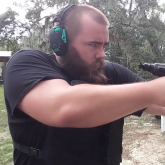 Travis Pike is a former Marine Machine gunner who served with 2nd Bn 2nd Marines for 5 years. He deployed in 2009 to Afghanistan and again in 2011 with the 22nd MEU(SOC) during a record-setting 11 months at sea. He’s trained with the Romanian Army, the Spanish Marines, the Emirate Marines and the Afghan National Army. He serves as an NRA certified pistol instructor and teaches concealed carry classes.