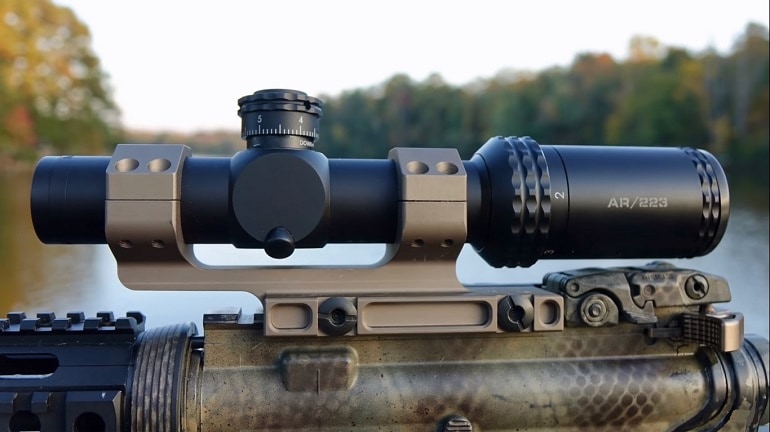 Low Power Variable Optics, or LPVOs, are my favorite type of rifle scope. They’re fast, they’re versatile, and they’re just plain fun to shoot. It’s great to be able to quickly acquire targets at close and medium range, then be able to challenge yourself and shoot out to long range targets and see how well you can do with minimal magnification.

Bushnell has a 1-4x LPVO in their AR Optics line, and it’s high time to see if it’s as good as the rumors say that it is, and if it can really hold up to the stiff competition from Vortex, Trijicon, and many other brands in the 1-4x space. I’m excited to see how it does, so let’s just jump right into it.

If you can find the Bushnell on sale or for noticeably cheaper than the Crossfire II from Vortex, then it’s an absolute slam dunk. If they happen to be similar in price when you’re looking then it becomes more of a toss-up, but the image quality from the Bushnell is much better than I anticipated, and there was very little brightness lost when changing from 1x to 4x magnification.

The image is bright, sharp, and free from distortion, the reticle is perfect for shooting .223 ammo since it has a BDC designed specifically for it, and my only real beef with the Bushnell is that the adjustment turrets are a little too easy to move.

For enough information to really decide if the AR Optics is the right scope for you, read on for the rest of the review. 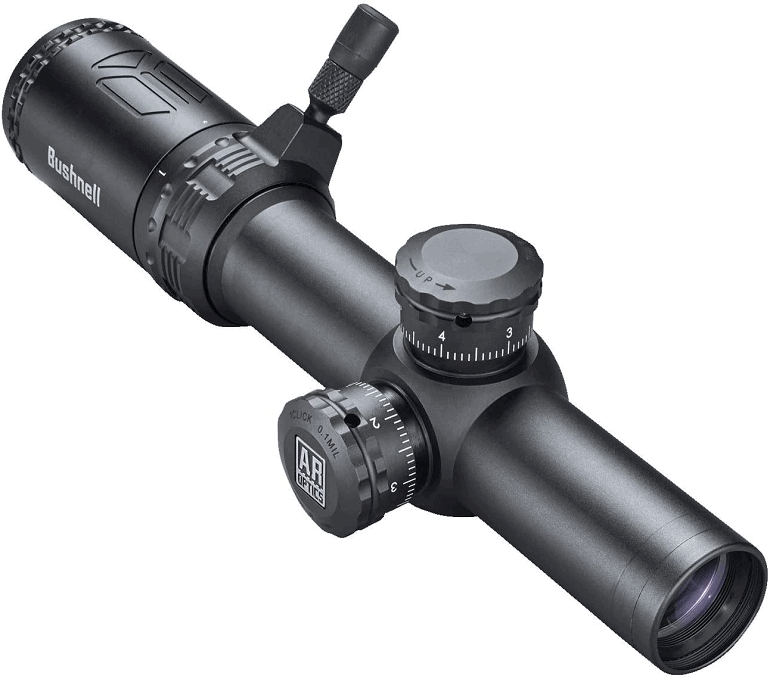 What Is an LPVO For?

LPVOs are designed for flexibility. I would consider a true LPVO to go all the way down to one-power, although something like a 2-7x would likely still be considered by most to be an LPVO. The idea behind an LPVO is to have one scope that can function well at super close range all the way out to long range.

The widest range for an LPVO that I’ve seen is 1-8x, and it’s more common to see 1-4x and 1-6x. The trick with LPVOs is that the magnification is usually low enough that you end up relying very heavily on the reticle for longer range shots since you can’t see your target as clearly as you would with a higher-powered scope.

Is the Bushnell AR Optics 1-4x Good? Why?

The Bushnell AR Optics hits the nail on the head with what makes a good LPVO, and have designed it with the DZ-223 (drop zone) reticle, which gives you crosshairs with dots that mark where a standard .223 Remington or 5.56 NATO shot is going to hit at different distances.

The downside of this reticle is that the Bushnell is only a good LPVO if you are shooting .223 or 5.56, which is the reason for the “AR Optics” branding. If you’re mounting it on an AR-15 variant then it’s a great choice. If you’re shooting anything else, you may want to look at a different option.

You can get it with a different reticle (including the BTR-1) from OpticsPlanet, but the price skyrockets to where it no longer seems like a great deal to me, though the BTR-1 version is also FFP (first focal plane), so if FFP makes sense for what you’re doing and the price point doesn’t bother you for an AR scope, then more power to you.

If you’re sold on the Bushnell with the drop zone reticle you can pick it up from Amazon or OpticsPlanet. Otherwise, read on for more details. 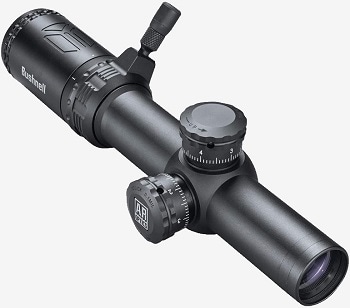 The price of Bushnell AR Optics 1-4x varies, so check the latest price at

What’s In the Package

Along with the scope, the package will have some tools for adjustment and mounting, a lens cloth, and lens caps. The inclusion of lens caps is a nice tough and something I appreciate. The rest is all fairly basic and it does not come with mounting rings. Different versions of the 1-4x24 weirdly have different tube diameters, so you’ll want to double-check to make sure you get the right rings.

There are some weird things about the Bushnell AR Optics, and we’ll go over those, but first the best thing about it. It’s O-ring sealed, has a 24mm objective lens, a PCL lever (power change), and a decent warranty.

I was surprised by how bright and clear the image is on this optic. Even at 4x, there was no discernible difference in brightness when looking through the scope compared to looking with just my eyes. The image was sharp and free from any distortion or chromatic aberration. 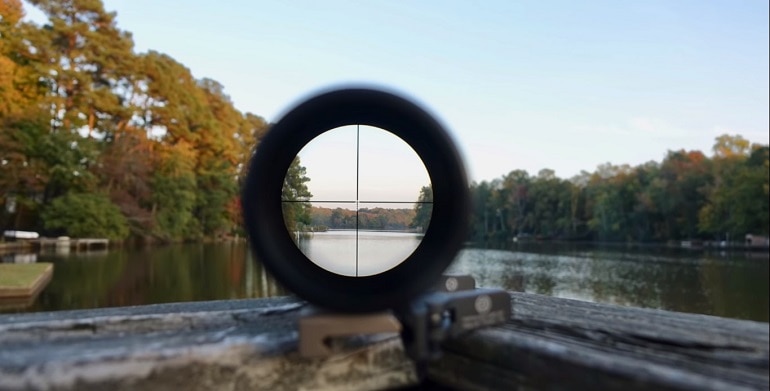 It’s obviously easier to achieve such great image quality at low magnifications, and who knows how well it would hold up if it went up to 6x or beyond, but it doesn’t so all that matters is how it does at the 1-4x range, and it does phenomenal. The clear image quality pairs well with the reticle to allow for shooting much farther out than you might expect given the magnification.

Here’s where things get weird. Depending on which of the 1-4x model you get, you might have a 30mm tube or a 1-inch tube. This can be particularly frustrating if the website accidentally sends you the wrong model. To further complicate things, there are different products in the AR Optics line with different magnification, and sometimes a product listing will say that it has certain features, but it only applies to a model with higher magnification.

Vortex also does that kind of thing with their Crossfire II line and it’s incredibly frustrating. 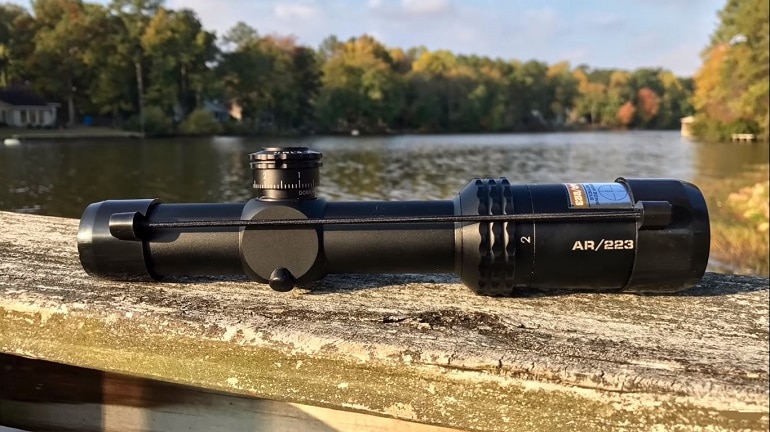 I am also a bit worried about how easy the adjustment turrets are to turn. I didn’t notice any problems, but over the long run I’d be worried that the recoil alone might be enough to make something shift, which is not something I would expect to worry about with a high quality optic.

Despite those things it holds up well and doesn’t seem to have much of a problem holding zero.

The turrets are .1 MIL adjustments instead of .25 MOA or .5 MOA, and I think choosing Mil for the turrets makes sense. It’s matte black, the windage and elevation adjustments are not capped, and there is no parallax adjustment.

This guy does really well in the field, and there are a lot of design features like the throw down PCL on the magnification ring that increase the usability of it.

How It Does At Short Range

Target acquisition is pretty quick, but the image does look different from a red dot and distortion definitely rears its ugly head when you’re up close at 10-15 yards. That said, the distortion isn’t bad enough to stop you from seeing what you’re aiming at and hitting it. Considering that it can also take you out as far as 200 yards, its performance at close range is more than satisfactory. 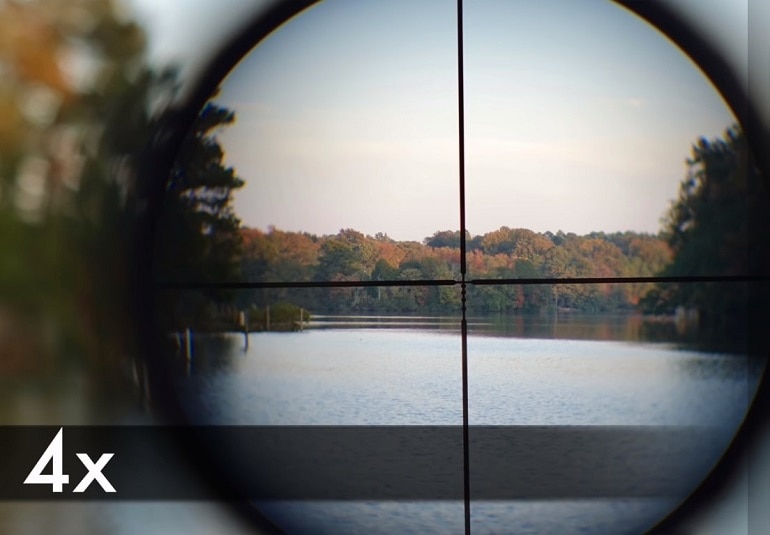 Eye relief is comfortable between 3-4 inches all the way from 1-4x. The reticle is second focal plane (SFP), so to use the BDC (bullet drop compensation) properly you’ll need to be at 4x, although I would imagine most shooters would choose that option anyway.

I have fairly good vision, so 4x is enough for me to shoot reasonably accurately at 200 yards. Don’t get me wrong, I’m no sharpshooter, so my standards will probably be lower than many others, but I could see my target as clearly at 200 yards as I could with 1x at 50 yards, and the BDC reticle is a valuable tool to estimate holdovers at different ranges.

The field of view at 4x is better than I expected. I have not seen this scope shoot out to 600 yards, nor have I done it myself, but based on what I have seen, I would say that if you can see it, you can hit it with this scope. No guarantees but that’s certainly what I would expect from what I’ve seen this scope do.

Low-Light and Other Performance Questions

The Bushnell is fully multi-coated and the images are just as bright and high-contrast as Bushnell advertises. The performance in low lighting conditions is also impressive, but this is where it lags a bit behind the Vortex. Don’t get me wrong, you’ll still have good visibility, it just won’t likely be as bright as some other options.

This is designed for the AR-15 platform, and if you keep it on something shooting .223 then it should last a long time and hold zero perfectly, unless you happened to get a lemon. If you mount it on something more powerful though, all bets are off, and you’d be better looking at the Crossfire II or possibly even the Trijicon AccuPoint.

Remember, you can pick up the Bushnell from Amazon or OpticsPlanet if you’re ready to do so.

The price of Bushnell AR Optics 1-4x varies, so check the latest price at 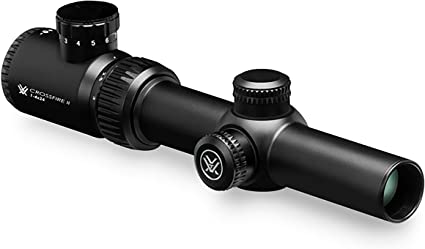 If you like the 1-4x range but want an Illuminated reticle, I’d recommend taking a look at the Vortex Crossfire II 1-4x24. It’s more expensive than the version of the Bushnell that we’ve been reviewing, but not that much and you also get better turrets and strong construction that can hold up to more than the recoil of an AR-15.

You can also look at the 1-4x from Primary Arms to see if it suits your fancy, the Burris Fullfield 1-4x, or the Trijicon AccuPoint 1-4x if you’ve got a lot of cash burning a hole in your pocket.

The price of Vortex Optics Crossfire II 1-4x24 varies, so check the latest price at

If you want to know more about Vortex Crossfire II, Check out our detailed Vortex Optics Crossfire II 1-4x24mm review

The Bushnell AR Optics 1-4x, despite its oddities, is a great scope for a 1-4x LPVO, especially if you’re mounting it on a rifle or carbine chambered in .223 or 5.56. I don’t think it would hold up as well on a medium-bore or large-bore rifle, and you pay a lot more for a reticle that isn’t calibrated to the .223 anyway.

If you are looking for more scope options with same magnification then must check out our guide on best 1-4x scopes.