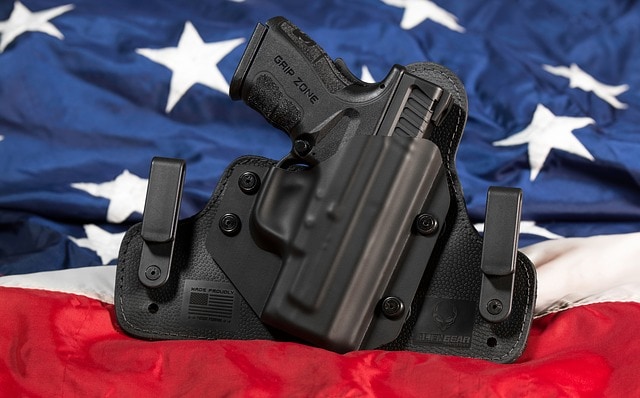 The Firearms Control Regulations Act of 1975, passed by the District of Columbia city council, effectively outlawed Washington D.C. residents from owning handguns, automatic firearms, and high-capacity semi-automatic firearms. Residents were forbidden to possess unregistered firearms, but police officers who had registered guns before the ban were able to avoid this controversial law. Inside one’s home, a gun was required to be unloaded and disassembled or held by a trigger lock. This particular aspect of the law was met with significant opposition as it was believed to be a grotesque violation of 2nd Amendment rights. Those in opposition of the gun ban argued that self-defense within one’s own home with a legally purchased firearm would be impossible.

The landmark Supreme Court case of District of Columbia v. Heller began in an effort to abolish the controversial law. The D.C. firearms legislation was among the harshest in the nation and a group of citizens banded together to file a lawsuit against the city. Six residents sued the city in the U.S. District Court for Washington D.C. on grounds that the firearms ban violated their right to protect themselves with a firearm inside their own homes. The case, known as Parker v. District of Columbia, was thrown out by District Court Judge Ricardo M. Urbina. However, the dismissal of the lawsuit would be reversed in a 2-1 decision in the U.S. Court of Appeals for the Washington D.C. circuit. The Firearms Control Regulations Act was ruled unconstitutional and a violation of 2nd Amendment rights, but they determined that only one citizen in the lawsuit had a legitimate case.

The plaintiff in question was a security guard named Dick Heller who possessed a gun at work to guard federal buildings. Heller sought a gun permit to legally own a gun in his home for protection, but was ultimately denied by the city. Due to his rejected application for gun ownership, Heller had grounds for a lawsuit in violation of his 2nd Amendment rights. On November 20, 2007, the U.S. Supreme Court agreed to take on the case. The primary issue to be decided by the Supreme Court was whether or not the D.C. gun law violated 2nd Amendment rights of citizens not in a militia and seeking to use a gun within their home.

District of Columbia v. Heller, 554 U.S. 570 was decided in a historic and monumental 5-4 ruling in favor of Heller. The court ruled that the 2nd Amendment protected a citizen’s right to use a firearm for protection within their own home. Citizens maintained that right even if they were not in a militia.

The dissenting opinion was comprised of Justices Stevens, Breyer, Ginsberg, and Souter. Justice Stevens stated that the right to bear arms only applied to citizens within the scope of military service and the government could regulate firearm ownership as needed. Justice Breyer delivered his own opinion and argued for a balancing test to take gun crime statistics into effect when deciding the constitutionality of the law.

Although the ban on gun possession within the home was thwarted, the Supreme Court further ruled that the 2nd Amendment was a right which could be limited. Lawful regulations on gun ownership could be put in place under certain circumstances. For example, legislation preventing gun ownership for felons or those who are mentally ill.

After decades of confusion, American citizens now had a firm answer to the Supreme Court’s interpretation of the 2nd Amendment.

The Law Force Behind DC VS Heller Case Next post