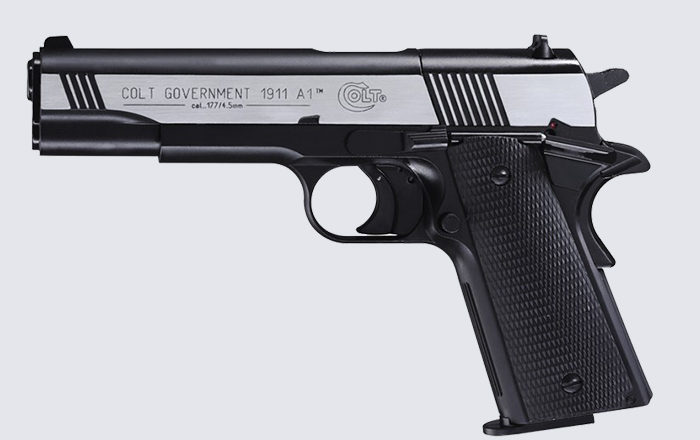 So you’ve decided to buy the best air pistol. Your friends who are recreational shooters and "plinkers” seem to get as much buzz from firing their air pistols as people do from firing metallic cartridges.

And you want that buzz too, but you’ve seen that air pistols come in varied configurations, from competition pistols for field target and ten-meter competitions, to general target practice and plinking, to near replicas for live-fire tactical training.

So how do you know what kind to buy?

Got the answers? I will wait you can ask yourself again.

Stores will present you with a bewildering array of air pistols, many of them replicating the sizes, weights, and designs of famous handguns.

But this article will help to narrow down your choices and in the end, you will come down to the air pistol that will be your preferred style, preferred brand, and the amount of money you are willing to spend.

However, here is a quick comparison table of some top pistols from all 3 categories we have reviewed pistols for. (Informal Target practice, Formal Shooting, and Live-Fire Tactical Training) 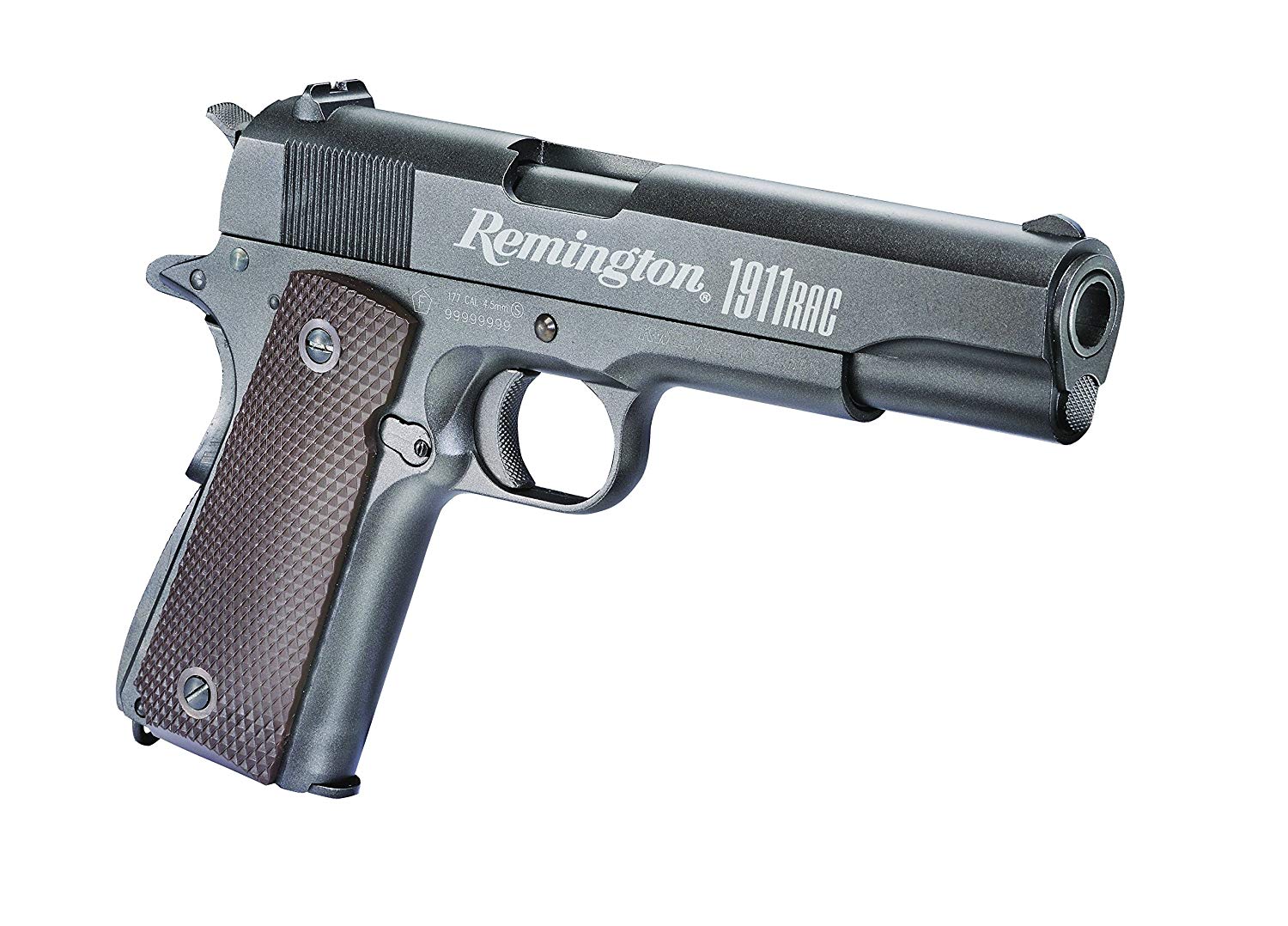 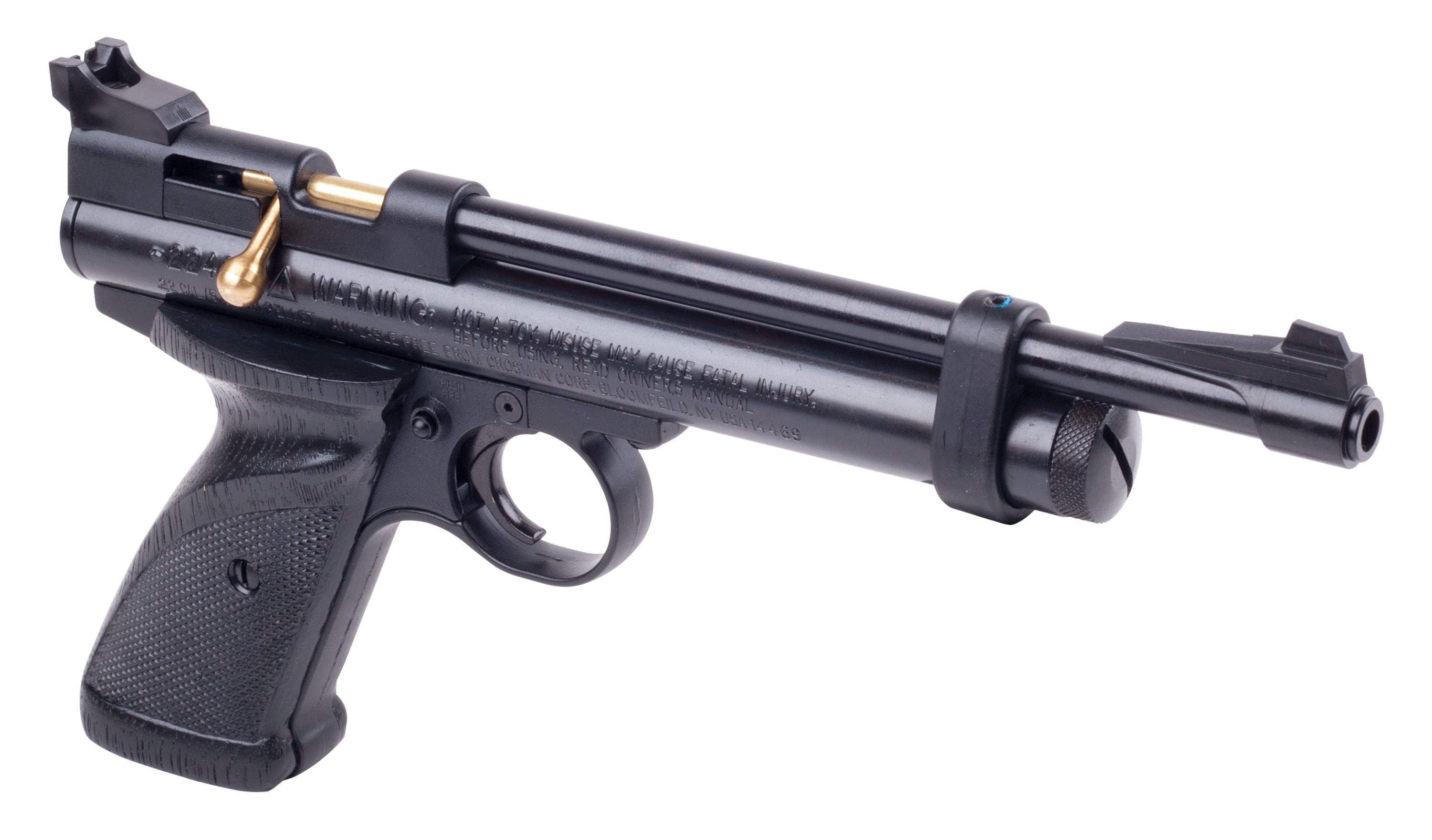 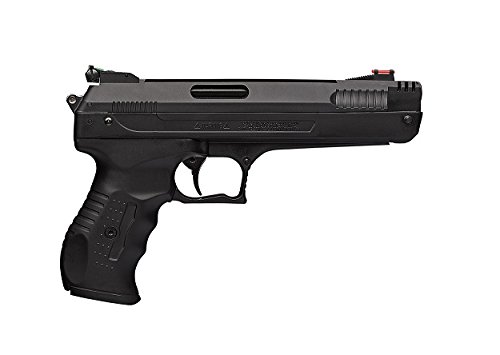 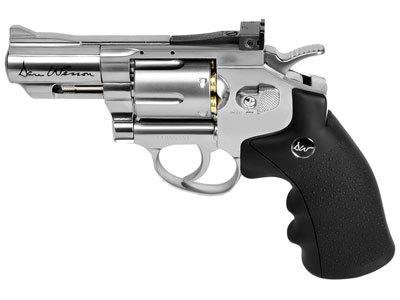 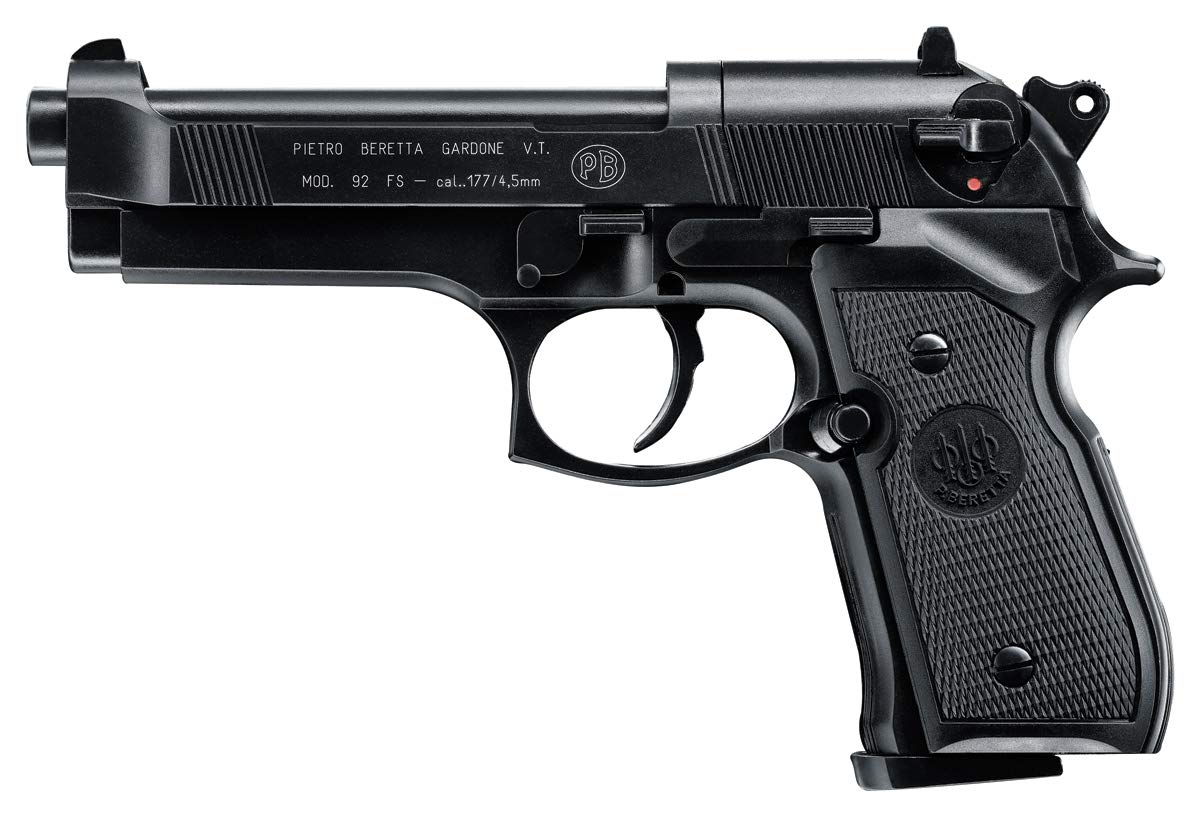 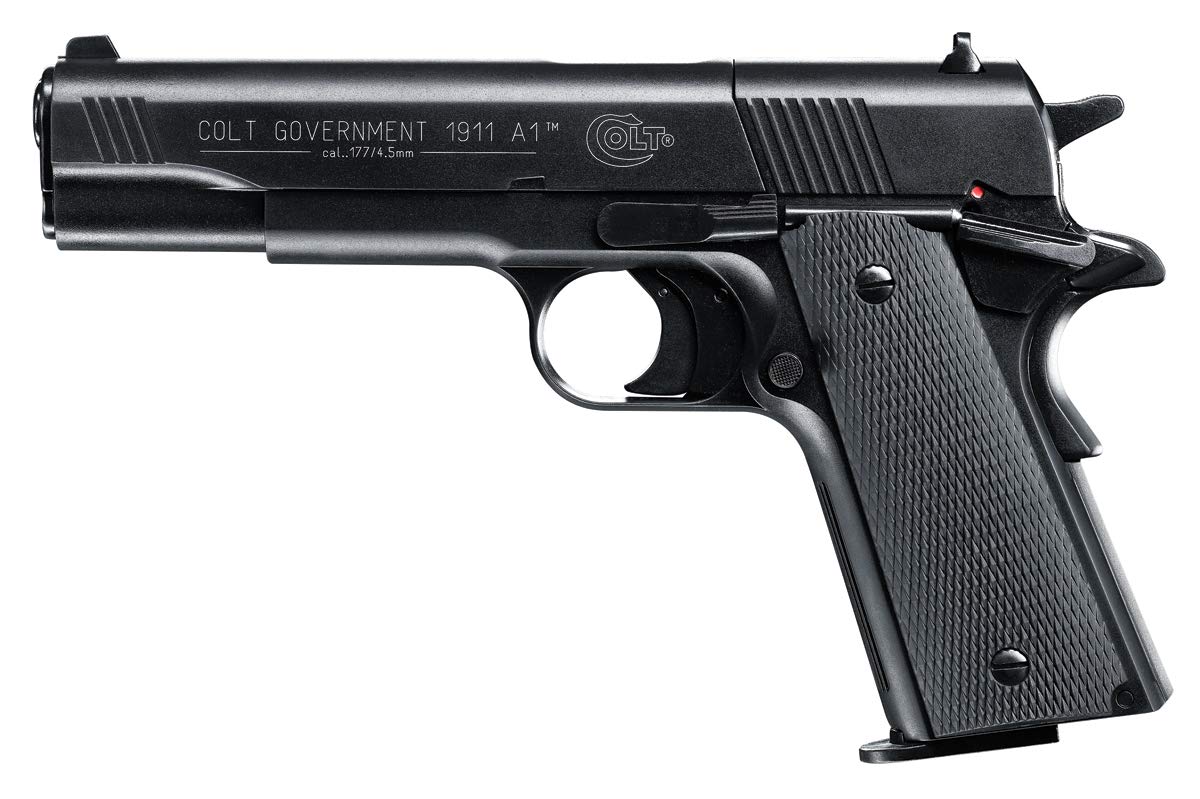 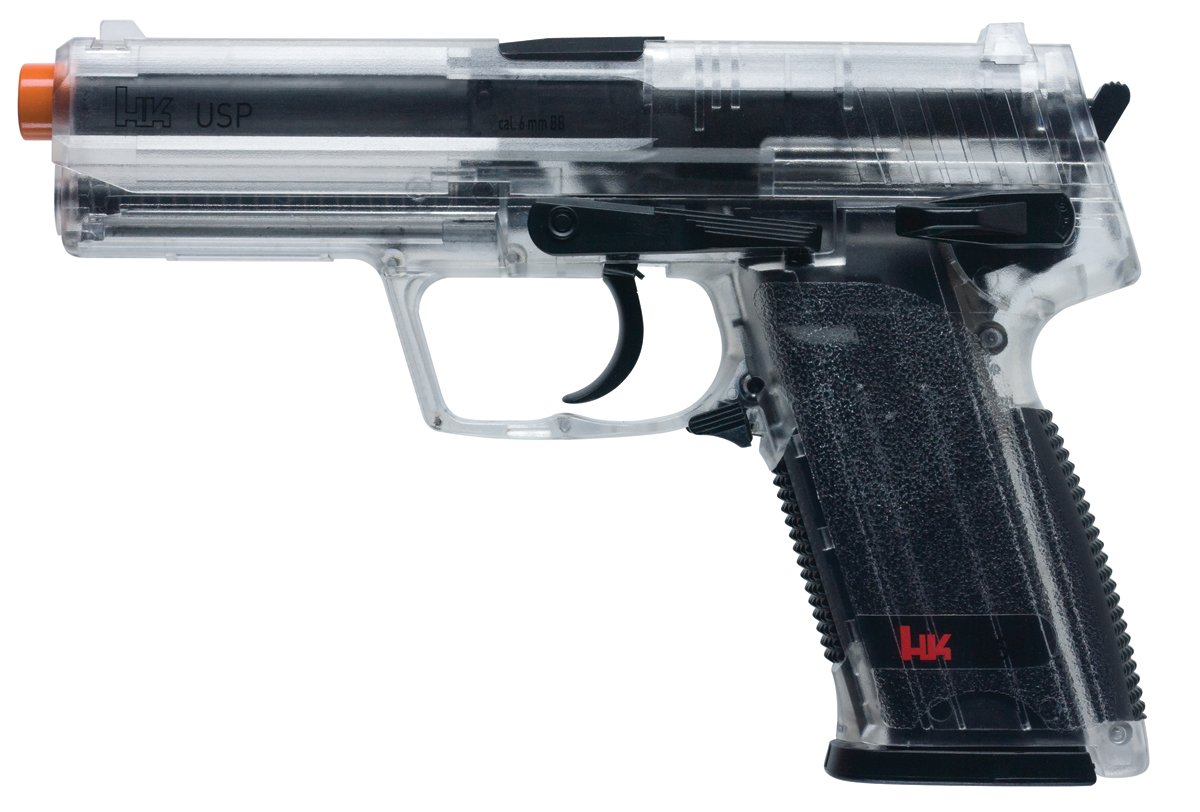 Pre-Charged Pneumatics (PCPs), which use only high-pressure air, rather than CO2, are well-known for their ability to discharge multiple shots. The .22 caliber Marauder Pistol comes with an 8-shot, auto-indexing magazine.

This quiet, bolt action pistol, with a velocity of up to 700 fps, is suited to hunting small game at a range of around 33 yards. Using compressed air of 2900 psi, it can take out rats, possums, and other quarry. In short, it's a pistol that performs like an air rifle. However, since it has no open sights, you'll need a dot sight or a scope.

With an overall length of 18 inches, the pistol also has a 12-inch shrouded and choked barrel and a raised aluminum breech which makes the clip easy to load.

The Benjamin Marauder is the most powerful air pistol and has great efficiency, considering its relatively small air tank, and is easy to pump up manually. It appears to be good value for money. CO2-powered air guns are an increasingly important part of the air guns market, and it's easy to see why. Lovers of replicas can enjoy them for their own sake, while the power source itself presents exciting possibilities.

This semi-automatic CO2 powered pistol looks and feels like the Colt that was standard issue for American military forces from 1911 to 1985. Weighing about two pounds, it has good field stripping capabilities, much like the original. Its magazine contains the BBs and the CO2cartridge which you can buy from any hardware store. It also comes with both fixed rear and front sights, so your accuracy is great at fifty feet or less.

The BB Pistol Kit can hold eighteen rounds in the reservoir, so less time is needed for reloading. Since it is a semi-automatic, you can fire multiple shots. I didn’t care for the plastic grips, but was able to exchange them for wooden ones for a few dollars. This beginner-range hunting air pistol with its steel breech and plastic grips is good for hunting and pest control. A sturdy, well-built pistol, it is powered by one 12g CO2Powerlet and is available in .22 caliber. The Powerlet provides 460 feet per second of power.

Being simple to load, the Crosman is good for plinking and is moderately priced, but several people I’ve spoken to remark on its loudness compared with other airguns. The pistol is ergonomically designed for comfort and balance, with a thumb-rest on each grip panel. The rear sight is open and adjustable, although it’s a bit fiddly.

You can use 2240 straight from the box, but it's also easy to customize. For example, you can buy a steel breech kit for it which includes a rail system for mounting optics. Some people have added spring guides, while others have replaced the trigger system to improve accuracy. The Beeman P17 is best pellet pistol for someone interested in a light, budget-priced, 4.5 mm (.177 caliber) air pistol. This realistic-looking single-pump pneumatic pistol shoots lead pellets. It’s made of plastic, with a stainless-steel barrel and is good for plinking or target shooting, although it is rather loud.

It has a pneumatic piston that draws air when you pump it for a single time, and it automatically defaults to safety every time you cock it. Since it is not affected by cold weather, you can shoot the Beeman indoors or out. Overall, the metal inner workings give it a solid feel.

The Beeman P17 is not hugely powerful, but its range is reasonable. It has consistent power and easily-adjustable fiber optic sights. Unfortunately, the pistol is too large to fit most holsters. Otherwise, it could be a highly useful training aid for single shot draw-and-shoot exercises. The name Dan Wesson is synonymous with iconic American pistols. Wesson was famous for his uniquely-designed semi-automatic handguns. Not surprisingly, his air-powered replicas are in hot demand these days.

To open the cylinder of this cleverly-designed air revolver, you simply push the catch on the left of the mainframe. You can also pull it back to serve as a safety. In fact, loading this air revolver with its 12g CO2 cartridge, feels like loading the genuine article.

You just drop in a new capsule, wind the screw until a hissing sound is heard, and put the grip back. There will be enough gas for at least 120 shots. But after the rapid fire you must let the bulb return to normal temperature, to prevent a slump in power output. You can use the trigger in single or double-action mode. The latter is faster, but then accuracy becomes more of a challenge.

People who buy ASG's Dan Wesson pistol like its looks, its feel and the realism of the loading and firing process. The frame is a sturdy aluminum alloy, and the plastic grips are resistant to knocks. The good news is that is shoots well too and owning one won’t break the bank. A PCP air pistol runs on compressed air, and shooters appreciate the accuracy this provides. Another advantage of the pre-charged pneumatic rifle is the power of its multi-shots. A friend who switched to PCP from springers says he is enjoying the change, especially the lack of recoil and predictable 50-yard shots. It has a built-in air pressure gauge and a synthetic grip.

The Crosman Silhouette PCB takes both heavy and light pellets, although not the leadless kind which are common these days. It would work well with a hand pump. It's almost as quiet as a shrouded pistol because of its efficient use of air. In fact, it will deliver about 30 high-power shots before you need to refill the tank, a surprising number considering the little air that's used.

While this pistol is somewhat expensive, and really intended for silhouette competitions, you can, of course, appreciate it simply as an accurate air pistol.

Described by one enthusiast as "a fun .177 caliber trainer for your backyard," this Crosman is a budget entry into the world of precision air pistols. Instead of putting their own barrel on the gun, Crosman put a high quality choked Lothar Walther on it.

This single shot air pistol uses 12-gram CO2 cartridges, each of which supplies over 60 useful shots with consistent velocity. It has a stainless-steel bolt with a longer handle to make it easier to operate. A fixed front post sight sits atop the aluminum muzzle. The rear Williams sight is fully adjustable, with positive clicks and target knobs.

There are two power levels (high=520 fps and low=440 fps), and the textured synthetic grips have thumb rests on both sides.

The Crosman 2300S is a boon for air gunners, who want to impress with their new-found shooting skills. It was designed for airgun silhouette competition, and is just about as accurate as air rifles. This pellet firearm is designed specifically for clubs where pistol shooting is taught. It's a moderately-priced, competition-oriented pistol which is ideal for both beginners and advanced shooters.

Because the 2300T has no power adjustment, the gun goes at full tilt from the start. Features include a 10.1-inch barrel with ten lands and grooves, a one-stage adjustable trigger with a pull of 1-4 pounds, and a screw to adjust over-travel.

From one Crosman Powerlet, the pistol does more than 40 shots (one shooter claims to have gotten 60,) Some of the loading difficulties with the 2300S pistol have been carried over to the 2300T—an issue Crosman needs to address in both pistols. (Who wants to rod the bore after every third shot?)

The sights are also awkward to use. The front post is narrow on this pistol, compared to the rear notch, and the distance between them makes it hard to estimate when the post is centered. However, mounting a red dot could make the alignment easier.

All that aside, Crosman has done a great job with both the 2300S and the 2300T pistols. The T lacks the power adjustability of the S, but the Crosman barrel is just as good as the Lothar Walther. If you want a good all-around pellet pistol, the T is the one to buy, but if you want to compete in air gun silhouette, I recommend the S. Either way, you're getting a quality air gun. I love the fit and finish of this beautifully crafted CO2 pistol which looks exactly like a real 9mm firearm and feels like a product that will last many years. That said, it was a bit expensive for a CO2 pellet gun. There are cheaper guns out there that will give you just as good a performance, although I doubt any will give you the same realistic feel and finish.

The Beretta has an excellent weight and balance, and apart from the recoil, it feels identical to the real thing. It's a great weapon for backyard training and plinking, whether or not you own the real thing.

Disadvantages? Pulling the trigger is hard in double action, and in single shot it's unpredictable. It doesn't come close to 425 fps and needs more power. All that aside, if you enjoy shooting replica pistols, the highly realistic Beretta FS92 will enhance your collection. This black CO2 powered pistol is made entirely of high-quality die-cast metal, so it looks and feels like the original 1911 and weighs the same too. I am enjoying its remarkable accuracy and power. In short, it’s fun to shoot. Like the Beretta, it can fire in double action mode (just pull the trigger) or in single action mode (cock the hammer before pulling the trigger).

The pistol has no adjustment on the rear sight. Another criticism would concern the safety on the butt of the gun because you need to grip the handle fairly tightly. The grip safety sounds strange and has a gritty feeling when pushed down. However, the grittiness smooths out with use.

As with the Beretta 92FS mentioned above, the only adjustable setting is the rear sight, which can be adjusted for windage using a key provided. The CO2 use is good, and will easily give you 60-80 shots. The Heckler and Koch USP was designed in the early 90s for the police and military, and it continues to perform reliably and accurately. It is 7.94 inches long, 5.35 inches high, and 1.26 inches wide. It weighs 28.16 ounces unloaded, with a capacity of 10/15 or 18 with a jet funnel.

Frankly, the USP isn't a sexy-looking firearm. "Stodgy" might describe it better. But if you like reliable German engineering, you'll appreciate its solid feel.

The stock trigger on the USP isn't its best point. It seems to value dependability and safety over comfort and precision. The trigger was probably designed for optimal reliability in bad conditions, but it could certainly be improved.

Good points? The single action pull is heavy but smooth, and the safety/decocker, mounted on the frame, is simple to use. The texturing on the grip makes for easy handling. H & K's proprietary finish is resistant to corrosion, and the machining is clean and precise.